About . Leadership . Office of the President . President's Biography

President Heidemann became the 11th president of the Cleveland Institute of Art on July 1, 2022. 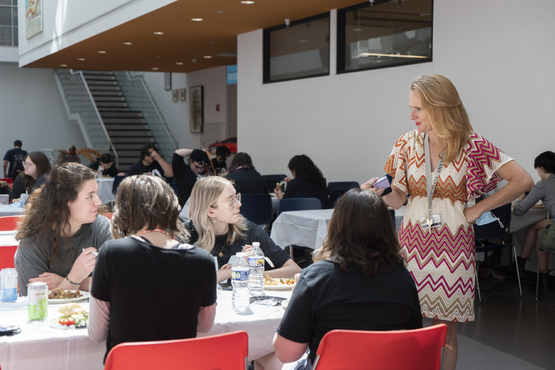 Kathryn Heidemann—a senior arts management and higher education leader, educator and artist—first joined CIA in 2019 as Vice President of Academic Affairs + Dean of Faculty. In her role as the College’s chief academic officer, she was responsible for program and curricular development and delivery, academic operations and strategy, student affairs, and accreditation and assessment.

Heidemann played a key role in the development of CIA’s most recent strategic plan, led the college’s successful reaccreditation process and led its COVID-19 academic planning, which resulted in the school safely offering in-person instruction. She also was instrumental in founding the Jane B. Nord Center for Teaching + Learning.

Prior to joining CIA, Heidemann worked at Carnegie Mellon University, where she served as Assistant Dean at the College of Fine Arts and Heinz College of Public Policy & Information Systems Management. As part of her role, she spearheaded the arts and entertainment management graduate programs in Pittsburgh and Los Angeles, creating data- and tech-informed leaders in the visual arts, performing arts, and interactive and entertainment media.

Heidemann brought two decades of professional arts and nonprofit management experience to her work at CIA, having worked in artistic programming, operations, external relations, and education and community engagement for a variety of cultural institutions, including The Pittsburgh Cultural Trust, Chicago Academy for the Arts and Edinburgh Festival Fringe, to name a few.

An active community leader, Heidemann also served as a mayor-appointed Art Commissioner to the City of Pittsburgh, a longtime board member of the Association of Arts Administration Educators, and an advisor to the National Consortium for Creative Placemaking.

Heidemann holds a Master of Arts Management degree from Carnegie Mellon University and a Bachelor of Arts degree from Columbia College Chicago. She is also a graduate of Leadership Cleveland (2022); the Leadership Academy for Women at the Tepper School of Business at Carnegie Mellon; Leadership Pittsburgh’s Leadership Development Initiative; Coro Center for Civic Leadership’s Women in Leadership program; and was named a 2018 Fellow by the International Council for Fine Arts Deans.

Heidemann is especially interested in role of higher education in creative placemaking, arts and community-engaged experiential learning, as well as cross-sector initiatives that intersect creativity, technology and social impact. Raised abroad (Australia, Venezuela, Germany), Heidemann is also passionate about the role of the arts in building bridges, fostering mutual understanding and cultural diplomacy.

An active bass guitarist and songwriter for more than 20 years, Heidemann performs with various bands and musical projects across the region. She lives in Shaker Heights, Ohio with her husband and two sons.