News . Feature Stories . Stepping into their own

Stepping into their own 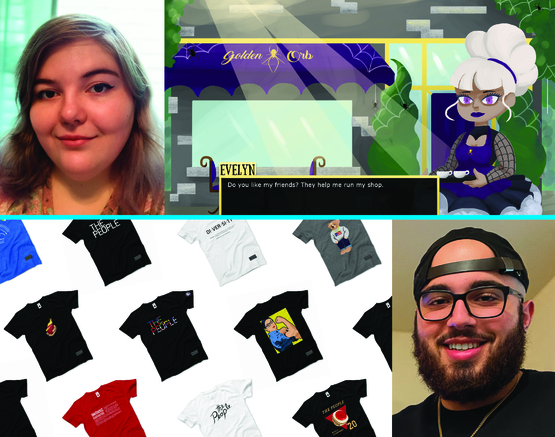 Taylor Mills, shown here with a âWitches in The Cityâ-themed game concept she designed, and Frank Ragone, who runs a diversity-themed clothing company named The People Apparel, were both first-generation students at CIA.

Being first in the family to go to college wasn’t easy for 2021 Cleveland Institute of Art grad Taylor Mills and 2020 alum Frank Ragone, and staying the course was a challenge, particularly freshman year. Everything was new, and they couldn’t rely on college experiences shared by older siblings, parents or grandparents.

But these days, Mills has just finished earning her degree in Game Design, and Ragone is busy applying his Bachelor of Fine Arts degree in Graphic Design at a full-time job in Austin, Texas. They are proof that with the right kind of support, it’s more than possible to overcome “first-generation” hurdles.

Mills says that although most of the people in her blue-collar circle in suburban Cincinnati dropped out of high school or left college early, she received key support where it counted—from her father and from Howard Norris, her graphic arts teacher at the Warren County Career Center in Lebanon, Ohio. Lincoln Adams, a professor in CIA’s Animation Department, was another inspiration, and Jared Bendis, who on July 1 will become an associate professor and be named Game Design department chair, schooled her in the business of art. “It was a big deal for me to go past my first year of college,” she says.

Choosing CIA became an option, Mills says, after “I finally got my dad to visit and showed him what I wanted to go into.” Her father was able to see that game design isn’t just play, but a business. To help support his daughter, he moved with Taylor to Cleveland to ease the housing situation.

Mills experienced culture shock at school, but she joined a community of fellow Game Design students and eased into the college groove.

“The first year was the hardest, mainly because my dad was struggling to find a job,” Mills says. “Financial Aid showed me ways to get better scholarships. They really stepped up when they saw I was having financial struggles. That’s something not all schools do.”

For Ragone, who grew up in Parma, Ohio, CIA represented a welcome taste of urbanity and diversity. He had graduated from Normandy High School, where his graduating class of 300 had only five people of color. At CIA, he was suddenly exposed to a much more diverse student body, learned about LGBTQ issues, and came face to face with cultures other than his own.

“Being so ignorant to everything going on in the world and going to CIA and having my eyes opened—I appreciate that a lot,” he says.

“Knowing what I know now, and knowing the backgrounds of my friends and of people I’ve met through what I do, I wouldn’t call myself disadvantaged anymore.”

In November 2020, Ragone moved to Austin to be marketing designer at Touchmate, a kiosk manufacturer. He runs his diversity-themed clothing company The People Apparel on the side and dreams of turning his Ragone Printworks into a high-end art print studio.

Ragone has been inspired by the likes of Pentagram founder Michael Bierut (also a Normandy High School graduate) and iLTHY clothing designer Glen Infante. He also credits Amber Kempthorn, a Visual Arts lecturer at CIA, for bringing him up to speed in drawing, greatly improving his chances of graduating.

Ragone, too, hopes to inspire other young people—especially those in economically disadvantaged Italian and Latino communities—to see what a creative life has to offer.

Matthew Smith, CIA’s director of Student Life + Housing, knows where Mills and Ragone are coming from. Smith learned the value of higher education from his mother, who studied to be an X-ray technician at Cuyahoga Community College in Cleveland. In high school, Smith took college-level courses at Kenyon College in Gambier, Ohio, which smoothed his eventual path (and helped earn him a scholarship) to Baldwin Wallace University in Berea, Ohio.

Like Mills and Ragone, Smith benefited from attending a small school, where he wasn’t just a number.

Making first-generation students feel like they belong matters to Smith.

“When we onboard first-year students during orientation, we have to do it with that kind of status in mind whether they need it or not, because some students celebrate it and others don’t want to let anybody know they’re first-gen,” Smith says. “They feel it puts them at a disadvantage.”

CIA makes sure to connect first-gens to teachers and staff of similar backgrounds who can speak to their issues and concerns.

“The key to working with first-gen students is that they need role models,” Smith says. “They need to know that somebody on that campus went through it, understands what their struggle is, and can be a sounding board and an advocate.”

The College also takes care to celebrate students’ victories, whether it’s landing a coveted internship or solving a financial problem. Staff also strive to minimize acronyms and to speak plainly.

Now that Ragone is settling into a multifaceted career, what advice would he give an incoming first-gen?

“Soak in everything and anything you can,” Ragone says. “Learn and grow. Become the best person you can be.”