"You have to push ideas out, because the clinicians that we work with can think of an idea, but they can't visualize it." 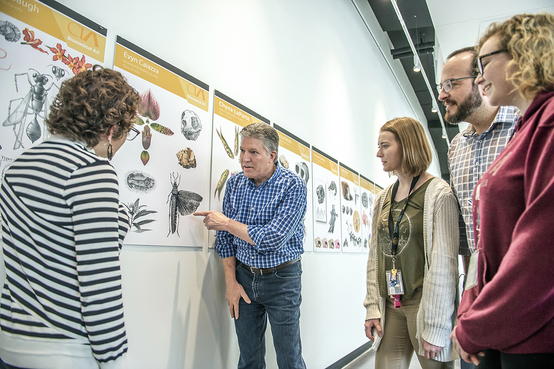 Kip Carter is chief of medical illustration at Educational Resources, which provides a wide range of visual support, including photography, animation and iBooks, for faculty and researchers at the College of Veterinary Medicine at the University of Georgia. He’s also a member of the Association of Medical Illustrators and an enthusiastic proponent of opportunities for artists who want to serve the needs of veterinary experts.

Carter visited CIA as part of the Cleveland Institute of Art’s Spring Show lineup of visiting artists, where he presented a lecture, met with Biomedical Art majors, and answered a few questions for us. We edited the Q&A for length and clarity.

Where did you go to school?
I went to the Medical College of Georgia. Now it's called Augusta University. It was a three-year program back then. It was low-tech. It was 90 percent pen-and-ink, airbrush, some prosthetics design, model-making. There were physical models, no computers. They weren't invented yet, because this was 1981. And for my first (digital) painting that I did of a dog eye with a severe conjunctivitis, everything on it was done with a mouse because the Wacom tablet wasn't invented yet.

I loved pen-and-ink, because I always loved the dollar bill, and the detail in those faces, you know? And there are people in this business that could do that back then, people like Russell Drake and Jerry Hodge, Max Brödel—he was before our time. But I mean, great pen-and-ink artists. And you look at that stuff now, and it still looks good.

Do you do all your work digitally now?
I'm not a technology chaser. I'm old school. But I do believe in a good concept. And you need to work out the lighting and the color before you ever get into that technical stuff. And if you don't stop chasing the technology, you'll never really be good at anything. You have to decide. What do I want to be good at? Two-D animation? Three-D animation? Because if you don't do 3D animation all day long, you're not going to be good at it.

When you first went to college, did you go for medical illustration?
Originally, I wanted to be a doctor. I was at Emory University, and just realized halfway through that this was not for me. I stumbled onto the program at MCG [the Medical College of Georgia], and I thought, oh my gosh, this could work for me.

I grew up in an art family. My father was a fine artist. He was a landscape painter, and very good, very successful. I was in his studio all the time. And I'd go to shows. I just loved being around the art. So when I finally figured this out, that [scientific illustration] is what I wanted to do, I was thrilled that I could actually make a living at it.

Then veterinary happened after. I went to MCG, and then the Association of Medical Illustrators had summer internships. You could pick a place around the country and study under somebody. I studied under Dan Beisel, who was a Johns Hopkins graduate and an expert pen-and-ink artist. And he was at the University of Georgia College of Veterinary Medicine. I did a year with him. And then, all of a sudden, he left. And they offered me the job. And I only planned to stay five years.

What’s the end product for the illustrations you do there?
Usually for publication or for teaching. And I've enjoyed it. We do really good work. We win a lot of awards. We just take a lot of pride in what we do.

What has changed?
Things need to be interactive now. It's no longer good enough that they're animated, they need to interact with the student so students will retain more of the information.

Are you personally making art regularly?
I've done a number of iBooks. And I just finished one on the estrus cycle in the cow. And that was challenging. I took a year to do it.

Are iBooks a big thing in that mode of teaching?
It is where we are. It's a multimedia experience. You're not limited by anything. So you get to do two-page spreads with illustrated backgrounds, and then float the type over it, and design the text to flow with it, and then put in an interactive that is directly suited to what you're trying to say.

For example, if I wanted to show you what corpus luteum looked like in the ovary, but you want to see the outside of the ovary, I would put in what we call a widget, which is a figure, but it's interactive. On the page, it looks like an illustrated ovary with a corpus luteum on the outside of it. When you touch on it, it enlarges and fills the screen, and then you rub off with your finger, and labels will appear, and you'll get a sectional view underneath. So you can appreciate what the gross specimen would look like.

So that's important. Why is it important? Because if you’re doing a rectal exam on a cow, and you're trying to feel for this, you got to know what you're feeling for. And then you also have to correlate that sectional view with the charts that show the stages of follicular development, which are tied to the different hormone levels. And so you're trying to correlate all this stuff so that it works for every student from every angle.

So what's been one or two your favorite projects that you've had over your career?
Oh, my goodness. An eye, probably the first really complicated thing I ever did. It was in gouache. And it was all the layers of the equine eye. And so it has every blood vessel, the whole retina, it's this big. It's giant.

What do you illustrate beyond pure animal anatomy?
It's research, it's processes, it's physiology. Now, on the medical side, it’s all going molecular. They're even trying to get away from dissection, which I think would be a mistake. I wouldn't want a doctor operating on me that had never touched a human.

Any tips for success in a career as a scientific illustrator?
I think it takes a little entrepreneurialism. You have to push ideas out, because the clinicians that we work with can think of an idea, but they can't visualize it. And it will just die on the vine unless someone takes it and actually does something with it.

There are 30 vet schools in this country, and there aren't even five educational resource units to serve them.

There's an opportunity there, right?
Huge. And it's about going there, and talking to people, and showing your work, and being persistent.