News . Feature Stories . In command of his art

In command of his art 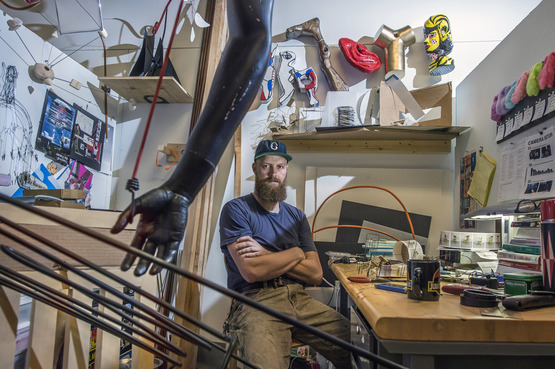 Brandon Secrest '20 in his studio at CIA. Photo by Robert Muller/CIA.

â¨â¨It’s not difficult to find examples of artists throughout history who had military experience. Paul Gauguin served in the French Navy. Designer John Paul Miller ’40 served in the Army. Even the late Bob Ross, he of the soothing voice and PBS painting lessons, was at one time a U.S. Air Force master sergeant.

â¨â¨Yet it’s still surprising to come across Brandon Secrest, 35, who in 2016 traded in his command as a Navy SEAL to start over as a freshman at the Cleveland Institute of Art.

Now in his second year, Secrest is majoring in Sculpture + Expanded Media. He submerges himself in making, as well as in the art history courses that help him understand the world he intends to be part of.â¨â¨

“I consider myself an object maker — a three-dimensional object maker,” he says. “I don’t want to limit myself to that, because I know there’s so much technology out there that could help me express ideas. But I like making physical objects, and big physical objects. I like things that look like I could grab them with my hands and throw them on the ground. They have a presence like another human being has a presence.”

â¨He is among eight current CIA students who are veterans. Six others receive federal benefits to study here as dependents of veterans. â¨â¨

Secrest earned his bachelor of science in English Literature at the United States Naval Academy. He invested more than 10 years on active duty, including tours in Iraq, Afghanistan, the Arabian Peninsula, and in east Africa on counter-piracy operations.

“My highest level of responsibility was basically running a team with multi-million-dollar quarterly budgets and 327 sailors and operators working for me,” he says. “So, going from that to the bachelor’s program here has been interesting.”

â¨â¨The art and military worlds undoubtedly have some cultural differences, but Secrest finds that his military training set him up well to succeed in art school. â¨â¨“I can manage my time, I’m self-motivated — intrinsically motivated — and I do not quit on things. You can’t be a quitter in the arts,” he says. “When you get to an impasse, you need to find a way around it.”â¨â¨

SEAL training, arguably the most grueling in the military, prepares members to respond to a variety of circumstances and new information, Secrest says. As part of the SEAL community, “you’re expected to do a whole bunch of different things pretty well, because the whole point of that community is to be thrown into any situation and perform."

"In the arts, I find myself working in so many different media, and with so many different kinds of prompts and people," he says. "It’s not unlike the type of intellectual and emotional and professional dexterity that you need in special operations.”â¨â¨

Secrest has found that his status as a non-traditional student doesn’t much matter to his classmates. Although there’s a world of difference in life experience, he knows that he has as much to learn in the art world as they do.

He does cop to a bit of impatience, though, if he sees students reading their phones or nodding off in art history class. He wants them to know that being an artist isn’t just about making work in a vacuum.â¨â¨

“We’re reading about other people who are canonized artists. They did the work. How do we get there? I’m not saying the goal should be to get into a book,” Secrest says. “But … If you know how the art that you’re making relates to the world, then it’s going to be relevant to people who consume it. And then hopefully you have some modicum of success, and you get to do that thing that nobody else gets to do.”â¨â¨â¨â¨â¨â¨â¨â¨â¨â¨â¨