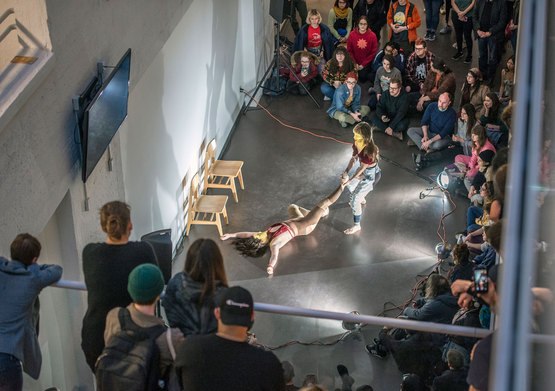 From the moment Sigrid Lauren dragged Monica Mirabile through the audience and into their performance space at the Cleveland Institute of Art, they demanded attention—and got it.

The New York City-based performance artists known as FlucT captivated a crowd of about 200 during their powerful, intimate performance of “Remotecontrol” Feb. 20 in the Jack, Joseph and Morton Mandel Auditorium.

Lauren and Mirabile, who’ve performed across the U.S. and in Europe, were pleased with their performance, which was part of a two-day visit to CIA sponsored by the George P. Bickford Visiting Artist Fund and the Sculpture + Expanded Media Department. Lauren says the overall experience was “beautiful, especially to talk to the students after.”

“They felt cognitively affected and inspired, and I think that’s the whole point,” Lauren says. “I think our favorite place to perform and share our methodologies and process and practice—and also listen to other artists’ practices—is in the educational environment of a college or university.”

FlucT performances are half sound, half movement. The duo constructs their soundtracks from pop music samples to soundbites from influential gender theorist Judith Butler, among other things, and they choreograph their every “violently intimate” move. Those movements are more than mere gestures—they take on painterly qualities, considering factors like composition, color and how a viewer’s eyes move across their field of vision.

Woven through their collective sights and sounds is a concern with media consumption—and how people navigate that increasingly treacherous terrain.

“We scroll, we let things enter us and we don’t pay attention to where our energy, our awareness and our attention is,” Lauren says. “We have to harness that—find, cultivate and protect it because it will control our life if we’re not paying attention.”

Adds Mirabile, “You don’t get to choose what you hear or see all the time; you don’t always get to choose how people treat you. There’s a lot you don’t have control over. Everything we do is kind of resonating in that frame of mind: control and lack of control, power.”

The inspiration for a performance like “Remotecontrol” begins in a personal place for the pair, often through a dialogue related to challenges they’re facing. Their conversation expands through the performance itself. Mirabile says the process is about creating a language—one that fosters connection, tests boundaries and isn’t limited by words.

“I hope that when people watch what we’re doing, they want to care about each other more and they want to find a language to communicate better to obtain that care,” she says.

During their time at CIA, Lauren and Mirabile conducted studio visits with Sculpture + Expanded Media majors and found that the artwork of many parallels their own in terms of how and what they communicate.

“All of those students are trying to identify this new language. ... This whole major is about using everything to try to identify a language that allows you to communicate, and it’s something completely outside of the realm we know,” Mirable says. “That’s just beautifully heartbreaking and I love it. I’m so grateful that these sorts of things exist.”

“Their work kind of related to us because it was all about transformation and processing,” Lauren adds. “They were making things that were more visual art but then also had—or were gaining—this experience of performativity, and these different mediums can lend themselves to each other and truly create new forms and new models.”

“Every one of our studio visits has been both giving and receiving in a really great way,” Mirabile says. “I think the students are doing important and good work, and it feels like the visits we’ve had have been very generous, from them and from us.” 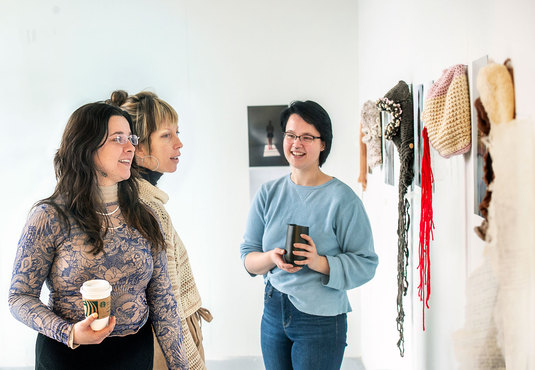