Princeton Review, Money Magazine, Payscale.com, and Niche.com place the Cleveland Institute of Art on their lists. 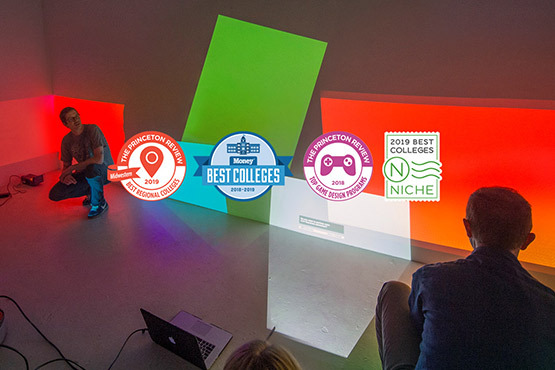 Students in the Photo studio

Four national college assessment organizations have included the Cleveland Institute of Art on their annual lists of schools that deliver a high-quality education.

The Princeton Review, a prestigious education services company, included CIA among its collection of 159 high quality colleges and universities in 12 Midwestern states. CIA was the only dedicated college of art and design on the list.

“We chose the Cleveland Institute of Art and the other outstanding institutions on this list primarily for their excellent academics," said Robert Franek, the Princeton Review's editor in chief. Editors made their selections based on data the company collected from its survey of administrators at several hundred colleges in each region, as well as its staff visits to schools over the years, and the perspectives of college counselors and advisors whose opinions the company solicits.

This is the fifth consecutive year that CIA has received the Princeton Review citation.

Payscale.com’s Best 2018 College Salary Report assessed colleges and universities on student’s post-graduation salary potential. Among 1,290 schools cited by Payscale for positive salary potential, CIA was in a three-way tie at No. 795.

Payscale also ranks schools in terms of their value to students interested in particular majors. CIA ranked 65 among a total of 313 schools selected as good choices for art majors. It was the highest ranking received for any dedicated art and design school in Ohio and all border states.

CIA also has been named by the ranking site Niche.com as the No. 1 College for Art in Ohio.