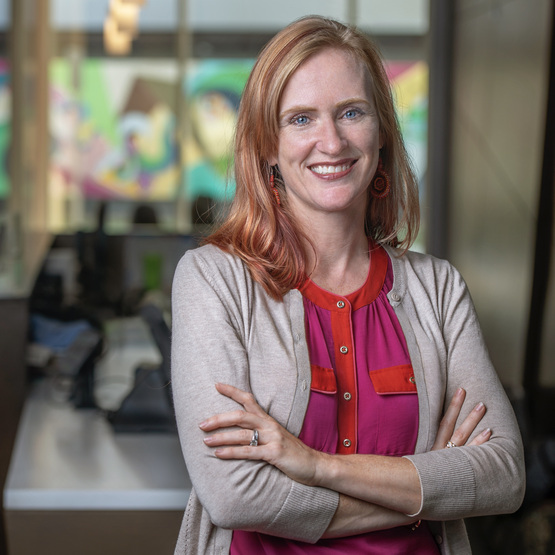 CLEVELAND—The Board of Directors of the Cleveland Institute of Art has named Kathryn Heidemann president and CEO, succeeding Grafton J. Nunes, who announced his retirement June 8. Her appointment will become effective July 1, 2022—providing almost a year for the two to complete a transition in leadership at the College.

Heidemann joined the Cleveland Institute of Art as vice president of academic affairs and dean of faculty in 2019. In her role as the College’s chief academic officer, she has been responsible for program and curricular development and delivery, academic operations and strategy, student affairs, and accreditation and assessment. She played a key role in the development of CIA’s most recent strategic plan, led the college’s successful reaccreditation process and led its COVID-19 academic planning, which resulted in the school safely offering in-person instruction. She will serve as CIA’s first female president in more than 100 years, following in the footsteps of founding president Harriet Kester (1882 to 1891) and Georgie Leighton Norton (1891 to 1919).

“We are thrilled to share the news of Kathryn’s appointment with the CIA community and Cleveland,” said Cynthia A. Prior Gascoigne, chair of the CIA Board of Directors. “When Kathryn joined us almost two years ago following an extensive national search, we knew she had tremendous talent, experience and potential. Her appointment to this new role provides us with a smooth, intentional transfer of leadership and vests CIA’s presidency with someone who has already built an incredibly strong reputation in the world of arts education.”

Prior Gascoigne noted that announcing Heidemann’s appointment at this time provides nearly a year for her to continue to work with Nunes, who agreed to stay on with CIA until June 30, 2022 to create a seamless transition for his successor. During the interim, Heidemann will serve as chief operating officer and senior vice president while continuing to fulfill the duties of her existing role. A search for a new vice president of academic affairs will be launched this fall.

“I am incredibly honored to build upon the legacy of my predecessors, and look forward to helping co-create the future of CIA while expanding our role in the future of Cleveland’s creative economy,” said Heidemann. “I am so grateful to CIA’s faculty, students, staff and alumni who, through their fierce creativity and practice as artists and designers, have shown me boundless passion and possibility for CIA. I look forward to what we will accomplish together.”

Prior to joining CIA, Heidemann served as assistant dean at Carnegie Mellon University’s College of Fine Arts and the Heinz College of Information Systems and Public Policy, advising on and implementing academic and curricular affairs, strategic initiatives, policies and procedures, and external relations for the two colleges. As part of this effort, she also spearheaded Carnegie Mellon’s arts and entertainment management graduate degree programs in Pittsburgh and Los Angeles, including the dual degree program with the University of Bologna (Italy), and launched integrated design-centered initiatives that fostered cross-sector innovations between creativity, public policy and technology.

In addition to her work in academia, Heidemann has more than two decades of professional arts and nonprofit management experience, and has held leadership roles in artistic operations, curatorial programming, marketing, fundraising, and educational and community engagement for a variety of cultural institutions including the Pittsburgh Cultural Trust, Jacob’s Pillow Dance Festival, Edinburgh Festival Fringe and Chicago Academy for the Arts. She also served as a mayor-appointed art commissioner for the City of Pittsburgh as well as on the board of the Association of Arts Administration Educators and Rivers of Steel National Heritage Area.

Heidemann holds a Master of Arts Management degree from Carnegie Mellon University and also studied at the University of Michigan and Columbia College Chicago, where she earned her Bachelor of Arts degree. She is a graduate of the Leadership Academy for Women at the Tepper School of Business at Carnegie Mellon, Leadership Pittsburgh’s Leadership Development Institute, Coro Center for Civic Leadership’s Women in Leadership program and was named a 2018 Fellow by the International Council for Fine Arts Deans. She will also serve as a participant in Leadership Cleveland’s Class of 2022 starting this fall.

“We remain incredibly grateful for the work Grafton Nunes has done to position CIA for the future,” said Prior Gascoigne. “Today, our college is known nationally and internationally for the work it does to prepare individuals for careers in the fine arts, design, crafts and entertainment arts. We are confident Kathryn’s skills, expertise, connections and proven leadership abilities will enable us to build and expand on that enviable reputation and position. She has the full support of our board as she prepares to assume her new role.”

Heidemann will become president of CIA as the college celebrates its 140th anniversary. Since it opened in 1882 as the Western Reserve School of Design for Women, CIA has been the training ground for countless students who have gone on to make important contributions to the fields of art and design. Its students have designed internationally recognized products and their work is displayed in major museums and private collections around the world. Notably, its graduates are employed by Hollywood and Fortune 500 companies, and work in academia, design studios and institutional settings. It enrolls approximately 600 students from across the country and internationally, and has a faculty of nearly 50 full-time and 60 adjunct faculty members, all of whom are practicing artists, designers and scholars.