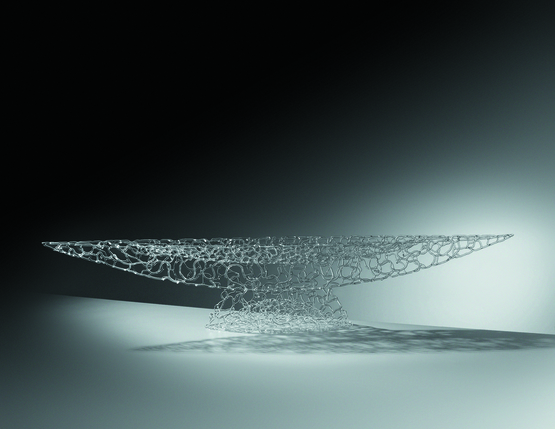 Even before the start of the studio glass movement in the 1960s, glass was a material that captivated artists at the Cleveland Institute of Art. Notable CIA alum Clara Driscoll went on to become a renowned glass designer for Tiffany Glass Studios in the late 19th century, and celebrated Cleveland School artist Edris Eckhardt was creating glass sculptures and started experimenting with fusing glass with gold leaf and bronze in the 1940s.

Glass established its roots at CIA in the early 1970s, becoming officially listed as a department in course catalogs in 1973. The program was chaired by its founder, Brent Kee Young, for 41 years. Young influenced generations of glass artists during his tenure and remains one of the region’s most acclaimed artists working in the medium today.

Fifty years after the program’s humble beginnings, Risk + Discovery: Glass Innovation at CIA aims to celebrate glass in all its forms, drawing connections to the unique learning environment of the college and its influence on the creative vocabulary of the region and beyond. The exhibition will feature work by makers working in glass or whose creative practice was influenced by the program’s pedagogy, including current and former CIA faculty, technical specialists, alumni and students.

Risk + Discovery: Glass Innovation at CIA will open from 6 to 8pm Thursday, April 6 in Reinberger Gallery. It will remain on view through Friday, June 16.