News . Feature Stories . Music in Cleveland delivers a dream of a career for photographer Janet Macoska 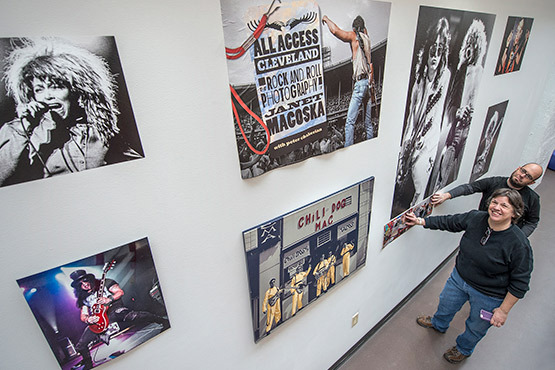 Photographer Janet Macoska has been on the front lines of the rock and roll scene for more than 40 years, capturing the energy of live shows by the likes of U2, Bruce Springsteen, the Rolling Stones and David Bowie. Her new book, “All Access Cleveland: The Rock and Roll Photography of Janet Macoska,” is the first compendium of her photographs. Macoska is part of CIA’s Lunch on Friday lecture series this spring in the Peter B. Lewis Gallery. She agreed to answer a few questions about her stellar career.

People tend to think that being a rock photographer is glamorous. What are some of the challenges?

Live performance is a dance the photographer does with the performer and the lights — with time constrictions. Nowadays, most performers allow photographers to shoot only three songs. Many require you to shoot from the back of the hall, at the soundboard, using a VERY long lens. I usually don’t take those assignments because it doesn’t allow me the creativity I need in these situations. You need to sense and anticipate what the lead singer and guitarist (or other subject) are going to do in the moment, as the music drives them. The lights, which are computerized now, change quickly and I actually enjoy the great big swatches of color that creates around the performer, but it could drive other photographers crazy unless you shoot in this situation a lot.

How has living in Cleveland affected your career as an artist and photographer?

I grew up in one of the best places on earth to photograph rock and roll. I discovered the Beatles and rock and roll at age 10. Had fabulous Top 40 AM radio to listen to, and disc jockeys who allowed me, as a 12-year-old, to hang around radio station WKYC, answering DJ fan mail in exchange for records. I got to shoot photos of stars like Sonny and Cher.

Because of Cleveland’s reputation as a solid Midwestern city with working class people who loved rock and roll, labels tried out new music here. FM stations, mostly WMMS, brought new music to us before it was played in the rest of the country and we embraced it. Therefore, I got to photograph bands like Roxy Music, the Sensational Alex Harvey Band, Sparks, Blondie, and the Ramones before anyone else did outside of New York and LA. And I got better access because Cleveland was a smaller city. The bands trusted us, too, and collaborated. Springsteen would often begin his tours in Cleveland because he wanted to try out new music in front of “friends” and fans. And then we got the Rock and Roll Hall of Fame in Cleveland, and I eventually became their house photographer.

Yes, there is a Rock and Roll god, and he/she put me in Cleveland.

When did you stop shooting film and starting shooting digitally? Do you miss the old medium?

I switched over from film to digital in 2003. It was a little difficult giving up my film camera, but as digi photography and cameras progressed, I embraced the new technology. It opened up the way I shoot. I SEE more light and the digi captures more colors and light than film, in my opinion. Plus, out went processing in smelly darkrooms with chemicals. My computer is my darkroom, and I edit and process much quicker. That makes my clients and me happier.

In the last few weeks, the music world has lost David Bowie, Glenn Frey and Lemmy of Motorhead. How has all that affected you?

David Bowie was the most difficult for me personally. He was one of my favorite artists to photograph, and I did several times. His music and lyrics and chameleon personas were always fascinating and inspiring. I shot a lot of wonderful images of him, and my favorite made it to the cover of the Plain Dealer when he passed. That shocked even me. I didn’t take any happiness from that, despite the accomplishment, but I was proud that one of my photos so represented Bowie that it made the front page. It was my silent tribute.

Also, for those of us who have been working in the music business so long (I’m now in my 41st year), it’s way too sad to have our contemporaries— the artists we listened to and photographed — leaving us rapid-fire like this. I photographed Lemmy at the Rock Hall Music Masters Tribute concert to Chuck Berry in 2012. Many artists came out to show how much he meant to them. I’m pretty sure Chuck didn’t really know who Lemmy was. When he shook Lemmy’s hand as he came onstage, it was the biggest grin I’ve ever seen from Lemmy. We are all fans at heart. I made sure to get a couple shots of the two offstage for Lemmy. When Lemmy passed, Chuck Berry’s Facebook page used one of those shots and paid tribute to Lemmy.

Name one of your best moments on the job, please.

I love shooting the Music Masters tribute concerts presented yearly by the Rock and Roll Hall of Fame and Museum to honor the most influential musicians in the development and evolution of rock and roll. What I get to see and photograph is the fan in the hearts of all these performers, because they turn up to honor someone who made such an impact on their own career. When the Rock Hall honored the Everly Brothers, musicians like Emmy Lou Harris, Graham Nash, Peter Asher and Vince Gill melted in the presence of Don Everly. I always rush backstage as soon as the concert is over to make sure I can photograph the musicians with the honoree. It is a gift I can give with my photography. Graham Nash had a smile wider than the sky while posing with Don Everly. Vince Gill was sitting on an equipment case crying, he was so overcome. I made sure to bring Don over to him for a quick shot. This is when I really love my job of documenting rock and roll.

One of your worst days?

I spent an entire day, hired by RCA, to follow around Lou Reed on a promotional tour. He was out and out mean to many people. He gave me the finger. I didn’t care. I shot the photo of him giving me the finger!

What music do you listen to off the job?

I put on Spotify and change every day. Sometimes it’s Alabama Shakes, but it can be Dusty Springfield another day. If I’m working with a particular artist at the Rock Hall or Rocksino, I’ll usually listen to their music days before the concert, or afterwards because their music is in my head. So, tomorrow I will photograph Donny Osmond at the Hard Rock Rocksino — and I will listen to his music today and tomorrow.