News . Feature Stories . Yes! He knows how to get to 'Sesame Street'

Yes! He knows how to get to 'Sesame Street'

Animator Alex Marek graduated from CIA in 2019. He and two other CIA artists interned at Sesame Workshop, which produces the childrenâs educational TV show âSesame Street.â 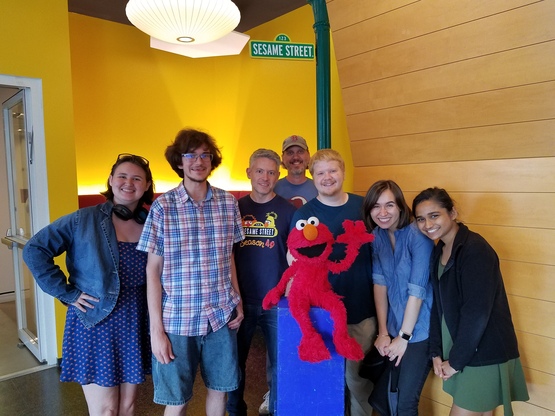 What did your internship entail?

My internship was on the Sesame Workshop animation team. I assisted in creating assets and animation for Sesame Street’s many productions worldwide. I’ve animated characters, illustrated props, and created concept art for several different productions in development at Sesame Workshop.

What has been the best part of your experience?

I get to work with an unbelievably friendly team of people on an iconic show that’s watched by millions, which we’ve all loved since childhood. The work that I’ve done is actually going to be used in the show and programs surrounding the show, so it’s been great for my growth as a professional animator. It’s not the kind of job where I’m copying papers or making spreadsheets, it’s relevant to my career and portfolio. Living in New York City has also been an unforgettable and fun experience.

Any unexpected aspects of your internship?

The most unexpected aspect of this entire internship was that I was not the only CIA student here. I had the pleasure of staying here with my best friend and fellow animation major, Sam Klug. Finding out that we both got this internship was an exciting and relieving moment, as it made moving to New York City a lot easier. Illustration major Mae Keller also landed an internship here, which Sam and I were completely unaware of until we arrived. Out of the 3,000-plus applicants to all of Sesame’s internship openings, it’s amazing that three CIA students made it into the same department. We gave a presentation on the school to explain how our experiences have helped us get to Sesame, since nobody in the department even realized we were all from CIA until after we were selected.

Where do you find creative inspiration? And do you think this internship has given you a new means of inspiration?

I mostly find my creative inspiration from cartoons and video games of all eras. I love both well-known and obscure animation and games, with colorful aesthetics and fun character designs. Inspiration can come from anywhere, so whenever I see something I like, I archive it, even if I have no idea what it is. This internship has definitely been inspirational, I’ve learned a lot about the massive backlog of Sesame Street’s characters, artwork, and overall design that I would’ve otherwise never looked into. I saw firsthand how much work has been put into this property for 50 years, and I’ve gained an entirely new appreciation for Sesame Street.

How did you find this internship?

I found it while searching for animation jobs on LinkedIn. Out of the many jobs and internships I applied for, Sesame was one of the companies that actually reached out for a Skype interview. Even though I didn’t think the interview went particularly well, I was told that my portfolio and resume stood out to secure the position.

One piece of advice for others seeking internships?

For Sam and I, one of the things that the Sesame team noticed was that we had at least a couple of strong animation experiences listed on our resumes. Sam and I both took the Community Projects class for animation twice, so we had a nice list of different productions that we worked on within our field. Getting the real-world experience is incredibly valuable, and working on personal projects outside of school and networking with others in your field will show that you are dedicated.

What is one thing you learned about yourself through this experience?

Moving to New York City with just under a month of prep time was the most daunting task I think I’ve ever had. Even with a friend on board, it was still a huge monetary and anxiety-inducing decision that left me nervous and uncertain. In the end, everything worked out wonderfully, and I’ve had one of the best experiences of my life. I learned that I can handle this type of short notice change with relative ease, and it’ll hopefully be much easier the next time I need to move for a job.

What has been your best non-job experience this summer?

Really, just being in New York City was the best experience of the summer. Even on days where I was just walking around the city, it was always a joy. I’ve wanted to live here since I was a kid, and now that I’ve done that, I couldn’t be happier. It wasn’t always cheap or thrilling, but the atmosphere, and being here with a friend, made this some of the best two months of my life.