News . Feature Stories . WRDSMTH talks about creativity and career ahead of CIA visit

WRDSMTH talks about creativity and career ahead of CIA visit 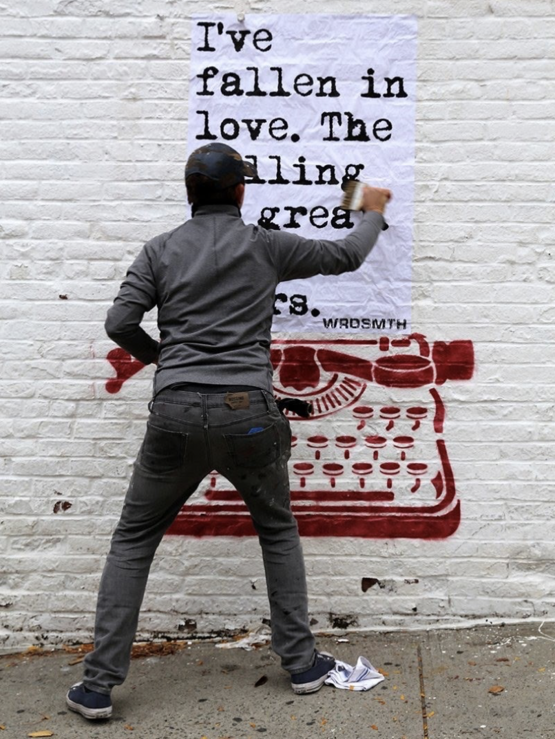 Whether as a child growing up on Cleveland’s West Side or as an internationally recognized street artist, WRDSMTH has long valued creativity. He appreciates its many forms, as evidenced by an artistic practice that combines his top creative interests: writing and graffiti.

WRDSMTH is now sharing his passion for creativity at sites across his hometown, including the Cleveland Institute of Art. As part of the “How Do I Love Thee” tour, organized by Graffiti HeArt, he’ll install 15 murals throughout Cleveland, Lakewood and Cleveland Heights.

His work—featuring typewriter paintings with pages that share inspirational messages—is readily recognizable. The message in his CIA mural is directed to the many artists and designers who pass through its doors: “Create. Every Day. And making excuses does not count.” It’s scheduled to be installed August 12 outside of Entrance C to the College.

Graffiti HeArt is a Cleveland-based nonprofit that’s dedicated to street art and education—and that has strong ties to CIA. Since 2015, Graffiti HeArt has awarded more than $80,000 in scholarships to underserved youth. The concept for the “How Do I Love Thee” tour was inspired by a poem that Sylvia Paul, mother of Graffiti HeArt president and founder Stamy Paul, shared with her husband Harry in a 1940s love letter.

WRDSMTH now lives in London and splits time between that city and Los Angeles. Before embarking on “How Do I Love Thee,” WRDSMTH chatted with CIA to discuss his early creative inspirations, how he got into street art and how the tour with Graffiti HeArt came to be.

Where in Cleveland are you from? Do you have a favorite “art memory” from your childhood?
I grew up in “The 157,” which is what I nicknamed my childhood neighborhood in Cleveland. Specifically, I lived on West 157th Street. We then moved to Fairview Park during my high school years. I have several creative memories growing up, none more influential than a piece of graffiti that someone was motivated to spray paint seemingly everywhere. It always said “Tony Hawk is god,” and I recall always being fascinated with it whenever I happened upon it. I always thought, “Who did that? Why did they do that? When did they do that?” That began my fascination with spray paint and graffiti, and eventually, street art. I also had some great teachers in school who encouraged reading and writing, which I did a lot of growing up. I was the youngest child of three, which made me test the boundaries of what I could get away with, which, in turn, meant I got grounded a lot. A lot. It was during those days/weeks of “solitude” that I became a voracious reader and also began writing and drawing.

What led you to pursue art? Was it part of what you studied at Miami University and later used in your advertising career in Chicago?
Well, I’m a writer—always have been. That was explored at college and led to my time spent in advertising. However, it wasn’t until I quit my job and moved west that I really began to flourish as a creative. Outside of the corporate world, I was able to write what I wanted, revise and polish my work, and deem it ready for the world. When I decided to try my hand at street art, I experienced the same freedom and liberation and was instantly hooked.

What led you to experimenting with street art in Los Angeles?
I was spending a lot of time in front of the computer doing what I loved: writing. I had just finished my first novel, The Holden Age of Hollywood, which ended up getting published. I was ecstatic and creatively fulfilled, but I realized I needed an active hobby that would get me away from the computer for stretches of time. I thought about exploring photography, which I love, but I know myself and knew if I went that route, I’d ultimately come to resent it because it would be pulling me away from my first love—writing.

So, I knew my active endeavor needed to somehow involve my writing, which presented a conundrum that was solved only when I thought about street art. I was always inspired by and in awe of street art, but I never in a million years thought I could do it. I thought superheroes did it because these amazing pieces would appear overnight on walls, buildings and rooftops. But when I began pondering street art, I came with the idea of a painted typewriter and a wheatpasted page featuring words I wrote. The simplicity of that idea and the fact I discovered no one had done it before made me forget all about my “fear” and caused me to dive headfirst into the pool of unknown that was street art.

I researched how to make stencils, how to wheatpaste, and spray-painting techniques. Little over two weeks after coming up with the idea, I was packing a backpack with supplies and heading out into the night to do my first pieces. That night, it was as if I was bitten by a radioactive can of spray paint. I was hooked and I felt like I discovered my true calling. Ten years later, I am WRDSMTHing full-time, and I get to travel the world to spread inspirational, motivational and romantic messages.

What prompted the collaboration with Graffiti HeArt for the "How Do I Love Thee Tour"? How do you hope people interact with these 15 murals?
I had been aiming to come to Cleveland to paint for a long while. If not for the pandemic, it might have happened sooner, but I’m happy it didn’t because along the way, I met Stamy and started working/planning with Graffiti HeArt. During our initial conversations, I said something along the lines of, “When I come to Cleveland, I definitely want to make my mark. I don’t just want to paint a piece or two—I want to paint the town.” That led into her pitching the “How Do I Love Thee Tour” … and here we are.

Will you describe your CIA mural? What inspired it? And how does CIA and its mural tie in with the rest of the murals and locations?
The CIA mural is one I am very excited about. First of all, it’s going to be outside the Cleveland Institute of Art, which, to a kid who grew up in Cleveland, is amazing. Secondly, it features one of several WRDs I have penned about the crazy, often difficult, and always worthwhile creative process: “Create. Every Day. And making excuses does not count.” To me, it’s solid, candid and memorable advice. And I hope it resonates with all who lay eyes on it.

What advice do you have for CIA students about pursuing a career in art or design?
Create. Every day. And making excuses does not count. I’d also add: “Do it for yourself. Do what makes you happy. Do what you love. And then hope what you do resonates with others.”