William Harper: The Beautiful & the Grotesque

The master metalsmith has spent a lifetime making magic with high and low materials -- and his wild imagination. 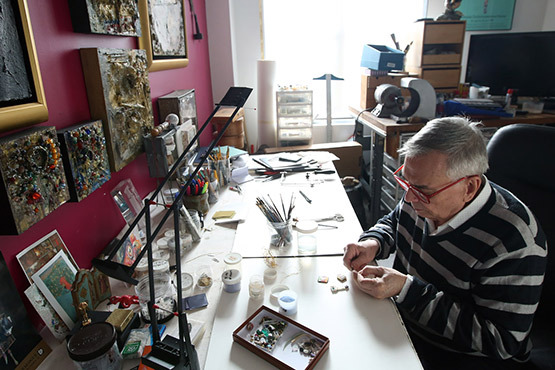 Two kinds of sounds can be on in the background when William Harper is making jewelry: classical music or tedious television. The creating side of Harper’s brain likes a certain type of side stimulation but not so much as to be distracting. Repetitiveness is good for the process.

“Lately, it’s been MSNBC. You hear the same thing over and over,” Harper says. “I can’t have a good movie on.”

Such are the quirks of an improvisational process that has served Harper for a career as he built a vast collection of pieces made of fine metals, enamel and stone. Harper pins, pendants and beaded necklaces, wrought in gold of varying karat weights, emerge from where the artist’s hands, imagination and memory come together.

Harper’s jewelry and other works go on view at CIA April 4, when Reinberger Gallery presents William Harper: The Beautiful & the Grotesque, the first Harper retrospective in 20 years. The exhibition continues through June 14, 2019.

Grafton Nunes, CIA’s president and CEO, set the wheels in motion for the show after visiting Harper at his home in Manhattan. “I was very aware of Bill’s prominence as a maker of distinctive jewelry from my years living in New York City,” Nunes says. “When I was hired to be president of CIA and realized that both John Paul Miller and Bill Harper were graduates of CIA, I was proud to be here. Two of the giants in their field had been both alumni and faculty members.”

Miller, a 1940 graduate of CIA and former faculty member, earned renown for exquisitely planned jewelry featuring granulated gold. Harper graduated in 1967 under an art education program once offered through a collaboration between CIA and Case Western Reserve University. Harper was a student of Miller’s, and his work shares the refined finish of Miller’s, but goes in a stylistically opposite direction.

“Bill’s work is distinguished by its wild imagination and impeccable craftsmanship,” Nunes says. “It is dramatic, even thrilling. It manages to be both substantial and delicate, and completely unforgettable.”

Harper has taught at Kent State University, Florida State University, and served as a guest faculty member at CIA and CWRU, Parsons in New York, and the Royal College of Art in London. His distinctive visual voice and influential enamel work have been celebrated in exhibitions worldwide. (A Harper brooch was part of the 2018-2019 exhibition The Body Transformed at The Met.)

In Gifts from America, 1948-2013 writer and curator Matthew Drutt observed that Harper is “one of the most influential artists working with enamels. His works ... have a character that is at once ancient and modern, delicate and finely fabricated, pictorial and abstract.”

The CIA exhibition will include about 50 pieces of jewelry, four paintings, and four oversized illustrated Japanese-style folding books. Also shown will be boxes elaborately encrusted with inexpensive materials. He builds the boxes to be long on the “kitsch factor,” he says, even as they house a piece of fine jewelry.

Together, the pieces exemplify Harper’s love of duality. High art and low, royalty and folk culture, the beautiful and the grotesque: They’re much more interesting in combination, he thinks.

“The ancient Greeks and the Egyptians thought the perfect being was a hermaphrodite, because it was half male and half female,” Harper says. “They also thought a hermaphrodite would be able to take a non-precious material and turn it into gold.”

Turning gold into art is almost as magical, although it’s never just about the sparkle. Influences come from dance, music, world cultures, and ideas about the self. The works must be substantive; Harper thinks in terms of series.

“Years ago I saw Philip Glass’s opera Einstein on the Beach. It was five acts, continuous. Between the major acts there would be little things that would hinge the acts together. They were called knee plays; they gave an indication of what might come in the next act.

"Between series, I usually do pieces that have little or nothing to do with the preceding series, but with which I play with new visual, material, or organizational ideas,” Harper says. “These are usually not as major as the work to be in the next series, but important because these are the triggers for the next major body of works. I refer to these as my knee-play pieces.”

He’s a big believer in Jasper Johns’ advice: “Take an object. Do something to it. Do something else to it.” Harper works on multiple objects at a time, making parts, then starts moving things around.

“It’s not a very efficient way of thinking,” he says with a laugh. “There’s probably no one else in the world who’s as scuttled as I am. John Paul Miller would do tempera renderings, in which he would have each and every granule picked out. I’m the exact opposite.”

Influenced as Harper is by a multitude of cultures, his work is also deeply connected to the human body—what it can do, what it can wear, and the challenges it tosses up for the artist.

One day in 1990, Harper noticed strange things happening with his vision while he was driving. The retinas in both eyes had detached. Over the years, he has had seven eye surgeries. “I’m totally blind in my left eye, and I have good enough vision in my right eye that I can do my work,” he says.

Likewise, he used to suffer from migraines that have since disappeared. “I would conceptualize a lot of work when I was in the pain state. Things would come to me. When I got rid of them, I was afraid my conceptual capabilities were going to be slowed down, but I don’t think my creativity has suffered.”

The Beautiful & the Grotesque will be on view in Reinberger Gallery from April 4 through June 14, 2019. The opening reception will be on Thursday, April 4, from 6 to 8pm. A full catalog of the exhibition will be available for purchase at the opening.