News . Feature Stories . What a wonderful kind of day with Marc Brown '69

What a wonderful kind of day with Marc Brown '69 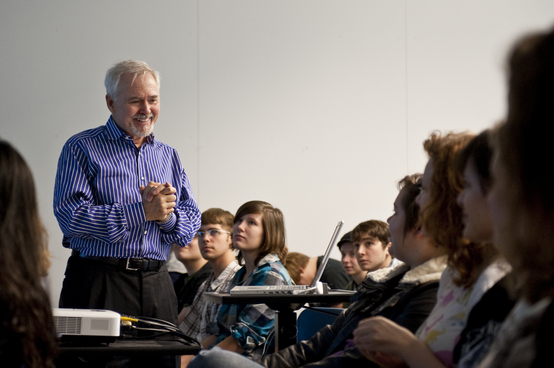 Bestselling author and illustrator Marc Brown ’69 has encouraged a generation of children around the world to read, learn, laugh, and “get along with each other.” But his illustration career was almost scrapped before it started.

The Emmy- and Peabody-award-winning author visited his alma mater in November to speak with Cleveland Institute of Art students and receive the Institute’s highest award, the Medal for Excellence.

About his career that almost wasn’t Brown told illustration students, “My parents had other plans for me, so my high school art teacher surreptitiously brought me to CIA for an interview.”

Brown recalls an intimidating Clayton Bachtel ’32 reviewing his portfolio. “He looked through it, grunted several times and said ‘Well, you’re accepted. Would you like to see some of your competition?’” Bachtel then showed Brown the portfolio of a high school student from Detroit who had already published a book. An apprehensive young man from Erie, Pennsylvania, Brown knew his CIA experience would be life changing.

“When I was here I got to try out everything and that was really exciting for me at the time,” he told a group of CIA donors the evening he received the Medal for Excellence. Brown dabbled in photography, printmaking, and textile design; his favorite class was Art of the Americas, taught by Professor Franny Taft; and he never forgot what Professor Emeritus John Paul Miller ’40 taught him about composition.

“I loved my time here; I loved the flexibility,” he said. “I owe this school a great deal. It really educated me and it gave me the opportunity to explore. I left the Institute with this wonderful education.”

Brown graduated with a degree in what CIA then called graphic arts. “I imagined myself going into advertising but the first art director I worked for had dollar signs where his pupils should have been,” he told students. Instead, he began illustrating books on a freelance basis while holding down – and then losing – a succession of day jobs. The first book he illustrated was Isaac Asimov’s What Makes the Sun Shine, which won a Children’s Book of the Year citation from the Child Study Association of America.

A phenomenonborn from a bedtime story

After five years of freelance illustration for Houghton Mifflin, Brown decided to write and illustrate his own stories. His popular Arthur books began with a bedtime story he made up for his son, Tolon. The first in the series, Arthur’s Nose, was published in 1976.

He has since written and illustrated more than 80 Arthur books, which have been published by Little, Brown and Company and translated into several languages. More than 65 million copies of the books are in print in the U.S. alone. The success of the Arthur books spawned the PBS television series Arthur’s World, which airs in more than 60 countries.

Arthur and his friends in the “ensemble cast” that Brown created are well-known to the vast majority of current CIA students and recent graduates, including Suzanne McGinness ’07, who attended Brown’s talk. McGinness recently illustrated a children’s book, My Bear Griz, to be released in fall 2011 by Frances Lincoln Publishers.

“I’m a huge Arthur fan and I really enjoyed Marc Brown’s talk,” she said. “He had such a great personality and he was so relatable.”

Preparing for the modern publishing world

McGinnis said she thinks the business world has gotten more complicated for artists since Brown’s student days. For instance, while Brown was able to turn his illustrations over to animators for the television series, many current CIA illustration students also take animation courses through the Institute’s T.I.M.E.-Digital Arts program (for Technology and Integrated Media Environment) so they can create their own animations. And recent graduates like McGinness need to have sophisticated websites and sometimes, even agents in order to attract publishers. By contrast, Brown told students “It used to be you could penetrate the walls of a publisher without an agent.”

Digital arts classes in animation and website design were not available to Brown and his 1960s contemporaries at CIA. Neither was CIA’s now-mandatory course in Business and Professional Practices. “You’re going out into the world so much better equipped than I was; you have these skills that are going to set you up so nicely,” he told students.

Some students may have been surprised to hear a traditional illustrator like Brown embrace the digital age. “Be ready to illustrate in a way that’s interactive,” he advised students. He said he likes the idea of electronic books, which allow children to interact with a story, even as they are learning important values.

CIA president Grafton J. Nunes admits to being a big Arthur fan himself. In presenting Brown with the Medal for Excellence at a special dinner for the college’s top donors, Nunes, a father of six, said “For 15 years I have been reading Arthur stories and watching Arthur on television with all of my children, who have absorbed valuable lessons about friendship, loyalty, honesty, and love in a humorous and emotionally beautiful way.”

Nunes said that through his “compelling compositions, engaging images, and charming narratives, Marc Brown has encouraged millions and millions of children to read, to learn, and to become truly human beings.” Those accomplishments, he said, clearly made Brown worthy of the Medal for Excellence, which recognizes “those who have made significant contributions to the arts through their own artistic pursuits or through their exceptional service and philanthropy.”

Brown accepted the award with touching words of gratitude. “Thank you for this honor; it’s wonderful to be home with such a friendly, warm group of people. And thank you for all you’ve done for the students who attend this school, who are so lucky to be here, because you’re making it a great place to get a wonderful education.”

With 35 years of Arthur under his belt, Brown is now looking for new artistic opportunities, including illustrating books written by other authors and collaborating on works with his wife, Laurie Krasny Brown. “I’m reinventing myself. I’m painting on gesso boards, I’m doing collage work; I feel like I’m coming back to where I started.”