Wadden foresees the future of color 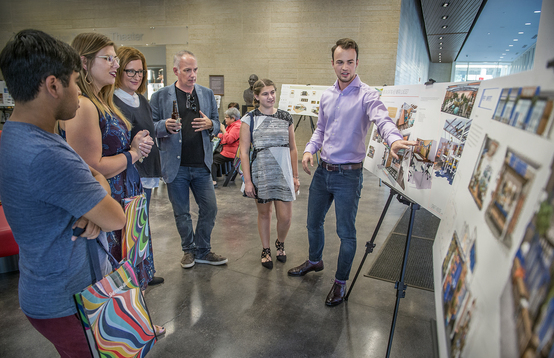 By Betsy O’ConnellSue Wadden loves painting. It wouldn’t be unusual for her husband to leave the house—say, for a concert—and when he returns to find an entire room in a new color.

As director of color marketing at Sherwin-Williams, Wadden, a 1998 Cleveland Institute of Art graduate, has plenty of inspiration for her serial home painting projects. She is responsible for the overall vision and philosophy for color leadership and leading world color trend forecasting for the corporation.

Her office is a light-filled room popping with color. Dozens of recent magazine issues form two lines down a large table big enough for a dozen people to sit at. Displays of color cards line several walls. Color swatches painted on cloth punctuate another wall, courtesy of a social media influencer who Wadden met at a blogger conference. There’s a desk parked in one corner.

She clearly loves what she does. “There are just a few positions like this in the world,” she says. “Getting people inspired and wanting to do a project to make their home better is what I am about.”

Wadden took a few detours before she found her spot in interior design. After graduating from Lakewood High School, she went to Ohio University to be a writer. She quickly determined that was not the right direction for her, came home and went to CIA. The College was a good fit.

“At first I wanted to be a jewelry designer,” she said.

She spent a summer interning with a Cleveland Heights artist and discovered it wasn’t the way she wanted to spend her days. After taking an interior architecture class, “right away I knew it was a good fit. I will go with my gut always.”

How did she end up at Sherwin-Williams in December 1998, only a few days after she graduated from CIA?

She calls it the job she tripped over. Her boyfriend at the time (now her husband) met a woman who happened to mention a design opening at Sherwin-Williams that Wadden might be interested in. She applied and was hired.

Wadden spent 15 years in the commercial/wholesale color programs and then moved into a division focusing on consumer color programs. She spent several years on the Colormix forecast team before being named to her current position.

Her work weeks can range from 45 to 90 hours, depending on the time of year and whether or not she is traveling for business—trade shows such as High Point Market, the interior design trade show in the U.S., where she will be a key speaker this fall, and Maison&Objet Paris, a European home decor fair—and what internal projects are underway.

Leading color trends is not a solo act, says Wadden. In February, Sherwin Williams’ Global Forecast Team—representing different disciplines—will start meeting about the next color forecast. “We need to inspire people to do a project.”

Wadden gets her inspiration everywhere-—those magazines lining her table, the trade shows, nature, clothing, space. Yep, space. One of the color trend personalities for 2019 is Shapeshifter, influenced by the rings of Saturn, artificial intelligence, spiritualism and healing energy. Shapeshifter colors include Celestial, Dark Night, Blue Sky, Endless Sea and Elation.

The Forecast 2019 brochure and palates and personalities tell stories and are meant to inspire. “Getting people inspired and wanting to do a project to make their home better is what I am about,” said Wadden. “I love what I do. I love helping people through this process.”

“This job fits me, my personality, my attention span, my corporate personality.”