VR/AR ushers in another reality

A donation of virtual and augmented reality headsets is giving Animation students new tools for building the digital world. 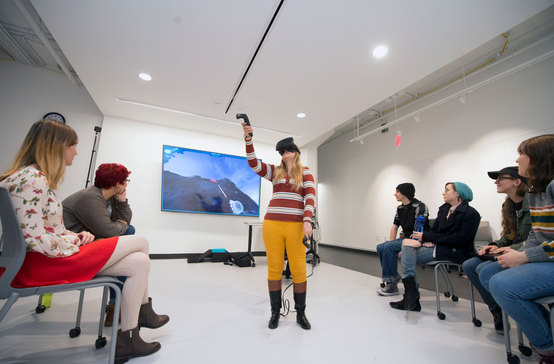 Animation junior Katie Schaefer experiments with an HTC Vive device recently donated to CIA by 360 Alley. What she sees in the headset is projected on the screen behind her. Photo by Robert Muller/CIA

On a recent Friday afternoon, about a dozen Cleveland Institute of Art students gathered in the third-floor Animation studio during their lunch hour for a chance to play fetch with a dog. They tossed sticks. They gave belly rubs.

The dog, though, was virtual—as was the entire experience.

The students were practicing on the HTC Vive, one of four virtual reality headsets recently donated to CIA. The gift, which also included Oculus Rifts and a mixed reality Microsoft HoloLens, will allow CIA students greater access to the burgeoning fields of augmented reality and virtual reality.

“It’s not that this is all new (to CIA)—we’ve been doing AR and VR here—but this allows us to expand to do much more than we have,” says Anthony Scalmato, Animation department chair. “It’s a whole new industry and area of technology, and our students will have access to help shape it.”

The headsets were donated by 360 Alley, a Northeast Ohio augmented reality content creation firm that works with publishers, marketers, museums and other clients to enhance their customers’ learning and user experiences.

“I have all sorts of VR and AR equipment,” says CEO Martin Tarr, “and I thought the best use of that equipment would be at CIA so more people could use and take advantage of it.”

The headsets will teach students that certain rules and aspects of what they’ve learned will slightly change depending on the medium they use. Faculty member Steven Rawley likens it to a Drawing major who moves from graphite to pastels. Understanding the nuances between virtual reality, augmented reality and more traditional forms of animation will better position CIA grads for a future in which the technology is increasingly accessible.

“One great thing about VR and AR is the idea of, if you have trouble envisioning anything in your head, there are artists who are able to make it become—or at least feel—real through digital media,” he says. “And as it's becoming more and more available, the potential for more and more production and more and more jobs will rise.”

The headsets also have potential benefits for Game Design, Biomedical Art, Industrial Design, Interior Architecture and Sculpture + Expanded Media. Professionals from those disciplines have begun collaborating with animators in the real world. Students who learn to work across disciplines while they’re still at CIA will have a competitive and creative advantage after they graduate.

Tarr is no stranger to the Cleveland Institute of Art. His wife, Ann Kelley Tarr, graduated in 1986. So, when after 30 years he sold his successful IT company to Dell and sought to start 360 Alley, he knew where to find people who understood the gaming technology, animation, modeling and video editing he desired.

“I wanted to start a new augmented reality business that was heavily dependent on the digital arts, and I could go to one place and get high-caliber talent and the resources I needed to start, build and grow my business,” he says of CIA. “There was no other place I’d go.”

“The Cleveland Institute of Art had really prepared all of the students with multiple skills, and they were employable immediately,” says Tarr, who also is a member of CIA’s board of directors.

“I was able to go to CIA and bring grads and interns on board and have them be immediately productive in helping me build application prototypes,” he says. “I think it’s a credit to the curriculum and the selection of students who come to CIA—and to the faculty.”