For example, an Arriflex 16 SR II motion picture camera can be seen along the wall below the railroad tracks east of CIA's George Gund Building, and a Yashica Mat 124G can be found in CIA's annex parking lot. The most visible is a Busch Pressman press camera on the sidewalk at the heavily trafficked corner of Euclid Avenue and East 116th Street.

One of the students, Liam Darby, described the idea of passersby taking notice of his and his classmates’ art as “exhilarating.

“I’ve always been a fan of big, public art, and when Barry said we'd be doing this, I jumped at the chance. I've been happy ever since he told us about it,” he says.

Adds classmate Izzy Summers, “I haven’t really had the chance to put up my work like this before. It’s really cool to walk around and see other work, and to see mine as well. ... It’s showing the public what the photo department can do and showing off the work we’ve done to people in University Circle.”

The class is designed to help students develop individual projects. For this group project, the class discussed possibilities for subject matter before ultimately deciding on the vintage cameras, all of which were selected from the department’s collection.

Students photographed the cameras in the department’s lighting room, edited them as needed in Photoshop or Lightroom, and printed them—each in three pieces—on a large-format printer. The students discussed locations, and once decided upon, they went out as a team to install them using wheat paste.

“It’s an exercise to get them to work with the idea of the camera as a subject matter, the ways in which an image can transform a place or location, (and) the way the signifier or the symbol of a camera can represent their identity and give them a little bit more of a sense of place in the community of CIA,” says Underwood, chair of the Photography + Video Department. “Also, it’s a bit of a nod to our contemporary world (and) how there’s cameras everywhere, even though these are older cameras. The idea that you’re being photographed all the time, we can have discussions about that.”

The murals were inspired by street artists JR and Chip Thomas, both of whom tackle issues of identity, politics and history in their work. Underwood invoked comparisons to Clarion Alley, which is home to both photo murals and painted murals. He described the alley as a point of attraction in San Francisco’s Mission District.

Several students said they valued the project’s collaborative element. In addition, learning how to communicate with fellow artists to complete a project was a big takeaway, Dillan Robinson said.

“It’s not something you learn out of a book; you actually have to experience it,” he says. “It’s been really fun to work with these guys. ... When Barry is out here with us, I consider him a teammate rather than a professor.”

“The artist working alone in the garrison or the garage or the studio” is a myth, he says. “That isn’t really how things happen, at least not in the contemporary sense. You need to have a support team, and for larger-scale images, you really need to have a team to expedite the project, and they need to depend on each other. So, how do we create support for one another? How do we build a community? And how can we build enthusiasm behind them?”

Underwood hopes that from this group project, the students will form concepts or think about materials for future individual works. He also hopes they take from it artistic inspiration. 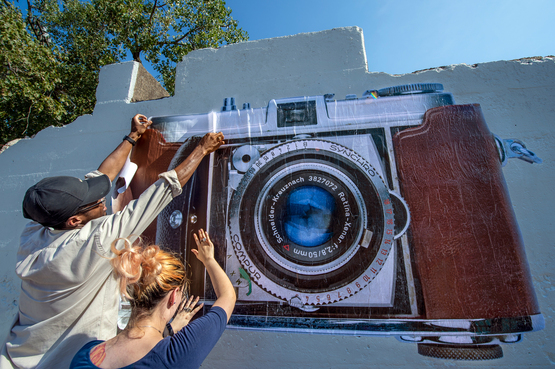 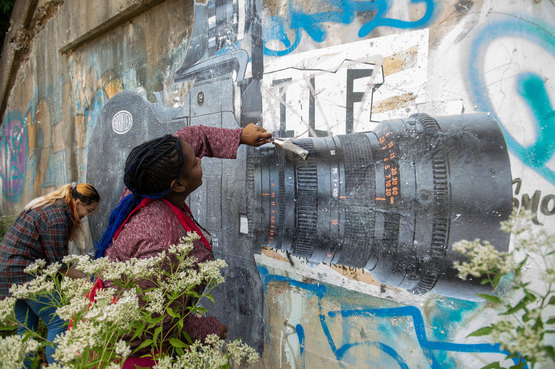 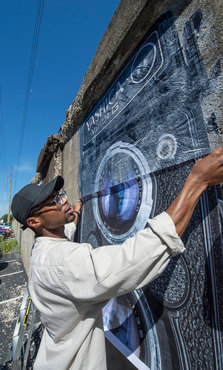