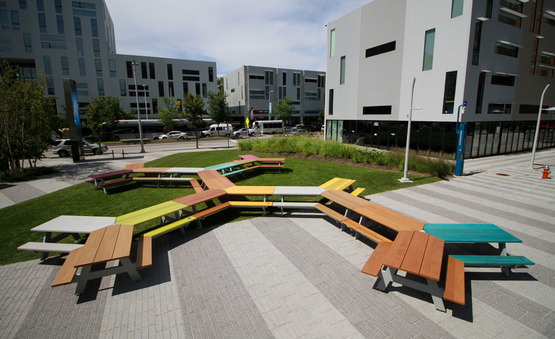 Late this summer, two CIA grads, both now living in New York, had high-profile works of public art installed on the campus of their alma mater's neighbor, Case Western Reserve University. Both installations are interactive; both bring people together; but the similarities end there.

Kathleen Barrie, the new director and curator of CWRU's Putnam collection of public art, commissioned both works. She points out that the new installations are a departure from the collection’s historic focus on sculpture. “One of the things the Putnam committee has done here is to say that the design arts are a key part of the collection as well,” said Barrie.

Reigelman’s installation, “The Great Picnic,” evolved from the challenge to design an outdoor table that could seat 100 people. He was initially inspired by the location of Toby’s Plaza, where Mayfield and Euclid intersect at what he calls “the crossroads of cultural Cleveland.” Soon he realized he wanted to emphasize conceptual intersections too—highlighting the convergence of people and ideas in University Circle. “Picnic tables are these perfect meeting points between people,” the 2006 graduate said.

The result is seven modular units with brightly colored tabletop arms radiating from a triangular intersection. Reigelman worked closely with an engineer to design a strong but minimal cantilevered base in welded aluminum. Even though each module weighs over 1,000 pounds, the effect is visually “light and airy.” The benches connect uninterrupted, inviting friends and strangers to come together to converse, debate, and share a meal.

Another point of convergence on the CWRU campus is the new Tinkham Veale University Center. Built as a campus crossroads, the Tink draws in everyone from prospective students to returning alumni. “We thought this would be a great opportunity to give people some insights into greater Cleveland, the icons and stories and history of the city,” said Barrie.

The Putnam committee partnered with Local Projects, the firm that recently created the interactive wall at the Cleveland Museum of Art. The result was a two-story-tall screen that responds to physical motion. For content, Barrie reached out to Tran. “We were so enthralled with her work, especially ‘Food Party,’” she said, referring to Tran’s colorful and wacky pseudo-cooking show for the Independent Film Channel.

Tran, a 2005 graduate, accepted the challenge. “When I found out the video wall had a Kinect sensor, it made sense to make a video game,” she said. “My only experience with the Kinect prior to the project was from playing Xbox games.” So she teamed up with game designer Ivan Safrin, 3D animator Bobo Do, and sound designer Jonathan Schenke to create “Welcome to Cleveland,” a series of six kinetic mini-games.

In the games, players jump around and wave their arms [see video] to spook visitors to Lake View Cemetery, or to surgically remove local comfort foods like pierogi from a Cleveland Clinic patient. “It’s Cleveland like you’ve never seen it!” said Barrie.

Barrie looks forward to future collaboration with CIA artists for the Putnam collection. She’s already working with CIA to select artwork by students and faculty for what she calls the “light blades”—two vertical LED signs that frame Toby’s Plaza. “There’s going to be lots of opportunities,” she said.

Above: Visitors congregate at “The Great Picnic.” Photos by Mark Reigelman II and Marty Hudzik of Communications Exhibits Inc. View more of Reigelman’s artwork at www.markreigelman.com. And find out more about Tran at www.thutran.com.