The Cleveland History Center will present an exhibition, Breaking the Mold: The Art of Thelma and Edward Winter, through through August 2, 2020. 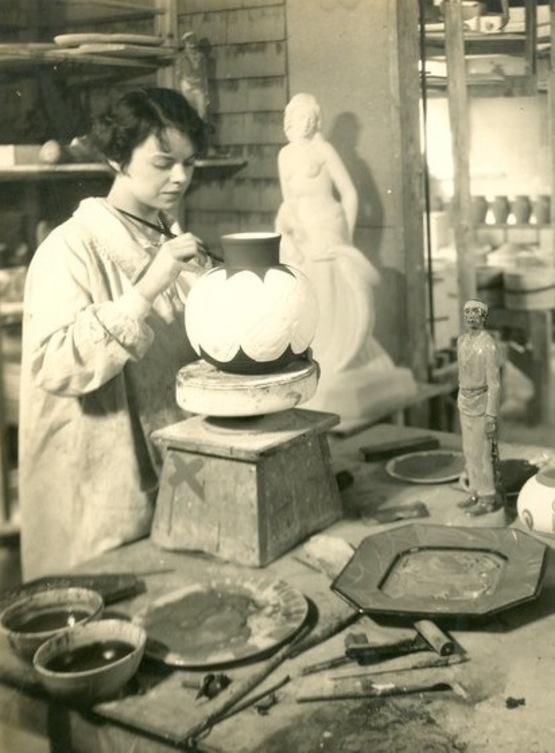 This photo from the Cowan Pottery Museum shows Thelma Frazier at Cowan around 1930.

Ceramic sculpture is often considered the most technical of the arts, Thelma Frazier wrote in her classic text on the medium, The Art and Craft of Ceramic Sculpture. Yet the pieces she created, beginning in the 1920s at Cowan Pottery, convey her exuberance and delight through their design as well as her use of glaze and color.

“Thelma Frazier’s work is very joyful,” says Mark Bassett, co-author of the book Cowan Pottery and the Cleveland School. “Even later, when she was depicting saints for church murals, you can see she draws from the optimism of the Art Deco period.”

“She had a signature style that was somewhat Viennese inspired,” Zimmerman says. “She was very talented and certainly on par with the rest of the Cowan artists, including Waylande Gregory and Edris Eckhardt.”

Frazier was born in 1903 in the small town of Gnadenhutten, Ohio, near New Philadelphia.
As a young woman, she made her way to Northeast Ohio to study at the Cleveland School of Art,
as CIA was then named. She would graduate in 1929. It was at CIA that she studied design with instructor Julius Mihalik, who had taught in Vienna before arriving in Cleveland.

Later, the Viennese Art Nouveau influence was reinforced by her husband as well as by fellow artist Viktor Schreckengost ’29, both of whom had studied in Vienna with Michael Powolny, a revered ceramic artist.

It was another teacher at CIA who had the most profound influence, though—Reginald Guy Cowan—who introduced her to ceramics.

“Clay, such a responsive medium, summons all one’s ingenuity and adventurous influence,” she told an interviewer from American Artist magazine in 1952. “Add the dimension of color, and its possibilities are really exciting. I felt at once that this was my medium.”

Before Frazier’s art school years began, Cowan had founded what would become the nationally
renowned Cowan Pottery. Advanced students from CIA were invited to spend time honing their skills there. Frazier happily did so, and then became an employee, working there from 1929 until 1931. Frazier returned to school in the mid-1930s to earn a degree in arts education from Western Reserve

College (now Case Western Reserve University). She went on to teach at Laurel School for several years, as well as at CIA. Through the decades, she received acclaim for her ceramic work: she was a perennial entrant to Cleveland Museum of Art’s famed May Show, where she won several first prizes. In 1939, she married Edward Winter, another Cleveland artist who was an enamelist and technological innovator.

“I think she was the more talented,” says Dean Zimmerman. “I think back then, as a woman,
you really needed a man to ‘front’ you.” Winter’s style and technique incorporated abstract
expressionism. His designs used foil inlay or opaque surface copper, steel, silver and aluminum. Frazier also began to work in decorative enamel, and made stylized sculptures and semi-abstract ceramics. The couple collaborated on 11 major church murals, including some for the Catholic diocese and the Arisen Christ, which can still be seen at St. Mary’s Romanian Orthodox Cathedral in Cleveland. Winter died in 1976, and Frazier in 1977. They left their home and estate to the Western Reserve Historical Society, which houses their papers and includes significant examples of their art in its collections.

A couple of weeks ago, artist Shani Richards visited with our Sculpture + Expanded Media students! We were so grateful to welcome her to campus! ð§¡ #CIACreates #Sculpture #ExpandedMedia https://t.co/4wGgfiuMdS