Painting major Liane Engstrom transferred to CIA with credits from other schools and lots of experience in the real world. 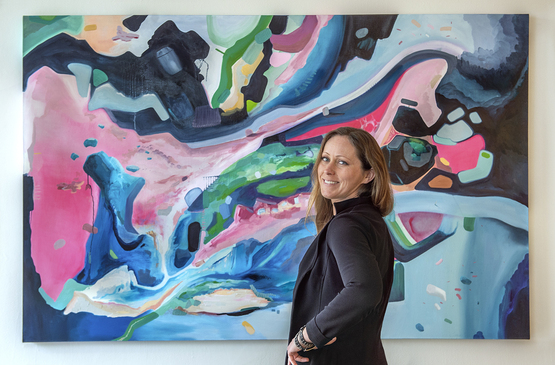 Engstrom was a diesel mechanic in the United States Marine Corps from 2006 to 2010. Before that, she worked in retail, painted houses and studied computer-aided design at ITT Technical Institute. Through it all, Engstrom has drawn and painted.

How did you end up at CIA?

All my life, I have been an artist. During my junior and senior year in high school, I attended a career center, where I received a two-year certification in commercial art. I began painting artistically in 2008 after a friend gifted me a canvas, paint and brushes for Christmas. Until then, my artistic pursuits were more in drawing and writing. Once I started painting, I fell in love with it.

After I was honorably discharged in 2010, I studied art at Palomar College in San Diego County, not far from (Marine Base) Camp Pendleton, where I had been stationed. At night, I participated in the San Diego art scene, painting at live art events like art shows, private dinners, and art and music festivals. I moved back to Ohio in 2012 due to a family situation, which interrupted my education at Palomar. In Ohio, I fumbled around with a few random jobs before deciding to attend CIA.

Was it a foregone conclusion that you would choose Painting as your major?

My previous experiences as an amateur photographer, painter, designer, writer, poet and illustrator pulled me in different directions. I thought painting was the most challenging. Not only is it physically, mentally and emotionally challenging, there are also deeply ingrained social stereotypes that must continually be quashed. Most people equate painting as a way for older people to relax and make a “pretty picture.” But to be a professional painter is to intake, digest and reflect on not only our contemporaneous world and events, but to do so with an understanding of the long history of painting, which is tightly woven into the history of the world.

Biggest challenge as a non-traditional student?

The social aspect. At my age, with my mentality and life experiences, I relate with many of my professors more than my fellow students. That divide has been a bit lonely at times yet freeing at others. When I went to college before, both at ITT Technical Institute and Palomar, I was much younger and didn’t take it as seriously as I do now. It is different for me now because I can appreciate the opportunities available to me without worrying about all the vain things our younger selves worry about. I am free to focus on my career.

What advice would you give to someone considering a similar move?

I would say, “What are you waiting for?” Most people cling to memories from high school and might feel like school is too difficult or time-consuming. They may feel like it would be too hard to get back into the swing of it. But that’s not true. It is when you are a bit older and free from youthful impulses that you will be able to do your best work.

Congrats to Illustration major Hannah Spieker for being selected into the Society of Illustrators Student Scholarship Competition 2021! Her "Meeting a Tree" was one of about 300 works selected from more than 8,700 entries submitted by professors of college-level students. @SOI128 https://t.co/5SM544t2Nt

"Entropical Paradise" is "an invigorating dive into the explorations of a rising generation of young artists grappling with a challenging medium," writes @steven_litt in his review for @clevelanddotcom. We agree! The show remains on view through April 23. https://t.co/OF1FfudvKW