CIA alumni enhance a candy icon at shopping centers in U.S. and Europe 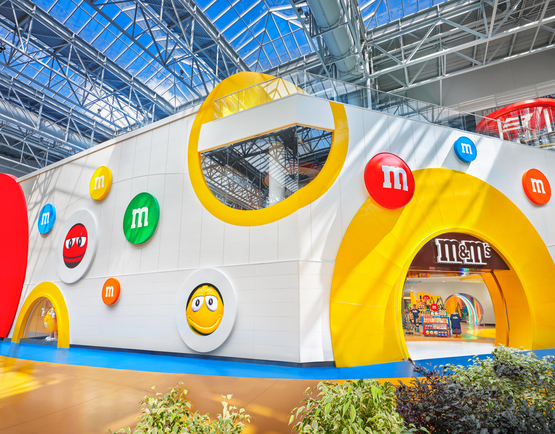 Making a statement while having fun might seem contradictory, but three Interior Architecture graduates of the Cleveland Institute of Art did just that, working on M&M’S stores in the Mall of America in suburban Minneapolis and Berlin, Germany. As employees of London-based branding company Landor & Fitch, Caitlin Gollini ’13, Ivan Ruvolo ’14 and Chris Rozman ’12 helped develop the looks and functions of both ultra-modern candy shrines.

Gollini and Rozman are senior 3D designers, Ruvolo a design director. All live in suburban Columbus, Ohio and have been collaborating with clients across continents, time zones, languages, and unfamiliar design standards and computer systems. Both M&M’S stores opened during the pandemic, and all of the trio’s work was done remotely, with occasional visits to Landor & Fitch’s office in downtown Columbus.

The two-story M&M’S store in Bloomington, Minn. is 24,000 square feet. The three-story Berlin outlet—the first M&M’S flagship in continental Europe—is 32,300 square feet. These interactive, high-tech environments, exploding with color and chocolate, are far more than structures. They are dizzying, high-tech expressions of an iconic, 80-year-old brand.

While the locales are very different, there are necessary similarities. “It’s unlikely that somebody’s going to visit both,” says Ruvolo, “but you want to make sure they’re getting the same experience no matter where they are. Mostly the things that are similar are ‘product moments,’ like the ‘who’s your color’ wall, which is all the different personalities and colors of M&M’S.”

Local references were required at both outlets. At the Mall of America store, cutouts of trees inspired by the Minnesota wilderness adorn gift containers of M&M’S called Stack ’Ms. In the store on the Kurfürstendamm, Berlin’s main shopping boulevard, the Stack ’M area showcases a grid based on the city’s long-defunct, experimental M-Bahn railway.

According to Gollini, the team on both projects included her, fellow senior 3D designer Ashley Randolph and design director Carly Tysh. Landor & Fitch creative director Eric Daniel oversaw both. Ruvolo says he was not “a client-facing member of the team, but did a fair bit of behind-the scenes support.” Rozman was a utility player, stepping in when needed.

“Nobody’s idea is less important because of their role in the company,” says Ruvolo, who joined Landor & Fitch soon after graduating from CIA.

The work could be taxing. Both Ruvolo and Gollini say learning how to work in the metric system in Berlin—a requirement because the architects were German—was particularly challenging. So was making one space out of two at the Mall of America—especially when one of two former stores there was a foot higher than the other.

“We had to figure out how to ramp them down to one space, meet code and create something that didn’t feel awkward,” says Ruvolo. They created large arches, figuring if the space needed such a radical rework, “let’s do it up and make a big scene of it,” he says. “We took a negative and turned it into a positive.”

“We took the existing layout and structures, knocked down a couple walls and merged them together and then started doing some applications to them,” says Gollini, who joined Landor & Fitch close to three years ago. They also installed a glass tube elevator tourists can see from outside the store. “Mall of America was floor planning more than anything, but we did obviously dress it up a lot. It looks very different from what it did when it started as an American Girl store.”

“In Berlin, we took that concept of the round, glass elevator and spiraled a technicolor, rainbow staircase around it that goes up all three floors,” says Ruvolo. The spiral staircase required railings all around for support. Why not colorize them?

“As you’re going up, the step you’re on translates into the colors that are suspending the staircase so the whole staircase is spiraling,” he says. Going from floor to floor “is almost an event. It’s an Instagrammable moment.”

These projects required an open mind and a holistic approach. “M&M’S has this great, colorful, candy-coated brand, right?” says Ruvolo. “How do you bring a space to life for them? And there’s the idea that candy is fun. How does that start to come to life? How do you create an experience around candy?”

“The M&M’S projects are very typical of the kinds of work our grads do in the industry,” says Michael Gollini, chair of CIA’s Interior Architecture department. All the work the department focuses on is commercially based, with emphasis on retail and experiential environment design.

“We do not teach students to just decorate the surfaces of a given environment,” Gollini adds. “There needs to be a strategy to their design solutions.”

Flexibility, too, is a major plus, says Caitlin Gollini. Be, in her father’s words, more than a “hot pencil.”

Congratulations to CIA alum Alison O'Daniel '03! Her film "The Tuba Thieves" was chosen to be in the Sundance Institute Film Festival 2023! ð§¡ð Check out a teaser of the film: https://t.co/WxbfTxtS85

Art is a healing force for both CIA senior Cullen Williams-Freeman '23 and CIA Board Member Josie Anderson. ð§¡ A fund recently established at University Hospitals by Anderson provided a paid internship for Williams-Freeman! Read the full story: https://t.co/e0lk3dgSZi