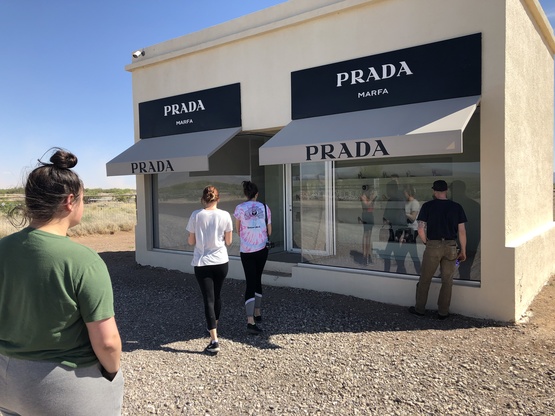 To get from Cleveland, Ohio to tiny Marfa, Texas, you can catch a flight to El Paso—then rent a car and drive southeast across the desert for 190 miles. You could fly to Dallas, of course, but the drive from there is really long—farther than from Cleveland to Manhattan.

Remote in almost every way, Marfa—population 2,000—has evolved into a rich if dusty mecca for culture seekers. Last May, seven Cleveland Institute of Art students and two faculty members made the journey. What they found was a West Texas study in contradictions and a new perspective on art and its connection to place.

“I got more out of it than I ever thought I would,” said painting major Bex Fuller. “I’ve been in Cleveland the entire time I’ve been in school. To go out and see that while still learning — it was absolutely mind blowing.”

A onetime railroad stop and the site of a former military installation and air field, Marfa started to gain cultural notoriety in the ’70s, when artist Donald Judd (1928-1994) moved there from New York City. He started buying land, reconfiguring old structures into art spaces, and building his own permanent art installations. He wanted people to experience contemporary art beyond the confines of the urban gallery. Judd built his own site-specific installation and created spaces for contemporaries, including Claes Oldenburg, Dan Flavin, John Chamberlain and others.

Over the decades, other artists have come to Marfa and new exhibition venues have emerged. In a town with two ATMs and no drugstore, music festivals and a food scene have developed.

In Marfa, artworks nudge viewers to consider questions of context and environment. That’s one of the reasons that faculty members Sarah Kabot, associate professor and chair of Drawing, and Amber Kempthorn, lecturer in Drawing, wanted CIA students to have the experience. Kempthorn had been to Marfa and saw its potential for students.

“I wanted students to understand that being an artist isn’t just about a studio practice, but a way of life,” Kempthorn said. “And while Donald Judd may be an extreme example of that, it’s really what he built Marfa to do. Also, he was dedicated to his peers, and making a place for their art to be seen the way an artist would absolutely want it to be seen.”

Kabot agreed, and helped make it happen by using some of the money she received as a recipient of the Joseph Motto Chair. The award provides the recipient and his or department with support and money for travel, materials and equipment related to education.)

Kabot saw the Marfa trip as an opportunity to show students alternatives to making contemporary art in New York. “It’s a way of seeing life after graduation as an artist,” she said.

Their travels took them to the installations, galleries, and to Big Bend National Park to experience the high desert landscape. They had time to consider Judd’s minimalist art, his vision for his work, and how he assimilated as a Marfa resident. Fuller said it made her consider the implications for her own life after college.

“Where you’re located is really important to your practice and your career as an artist,” she said. “Judd lived there, he worked there, he had his installations there. On different levels, that resonates with me, because there are so many different ways an artist can affect a community.”

Kabot noted that Judd “very consciously integrated himself into the community. He hired locals, built adobe walls, bought herds of livestock. The art world knew him as an artist and a critic, but I’m sure in that region, those individuals whose lives are impacted by Judd knew him also as a neighbor. It reminds me that all artists are also neighbors in their communities. An artist can be an ambassador.”

For Brandon Secrest, a non-traditional student double majoring in painting and sculpture + expanded media, the trip provided an opportunity for immersion in minimalist art—something he said he feels conflicted about. “I wanted to see what it was all about,” he said.

The landscape also made an impression. Secrest, a former Navy SEAL who did tours in the Middle East, realized that the last time he’d been to a desert he was carrying a gun. This time, he had the luxury of contemplation. The Marfa environment is remarkable for many things, including big sky and lack of noise. By design, there are fewer distractions, and Secrest embraced that.

“It calcified some of my feelings about this device,” he said, waving his phone. “Presence is becoming a rarified quantity in our contemporary life. Mindfulness is an important thing to have contact with on a semi regular basis.”

“We took a day to go to Big Bend National Park. We had packed a picnic lunch and were sitting at the base of the Rio Grande, and Sarah made a comment about how seeing this kind of geography makes you feel small, and not just in terms of physical space but also in terms of time,” Kempthorn said. “It really is about a slowing down.”

One of the lasting gifts was making the trip with a group of curious, enthusiastic emerging artists, Kabot said.

“For me it enriched my experience as a first-time visitor to Marfa, being able to share that with students who were also experiencing it for the first time,” Kabot said. “It made every moment special.”