News . Feature Stories . Student goes from motorcycles and welding to design at CIA

Student goes from motorcycles and welding to design at CIA 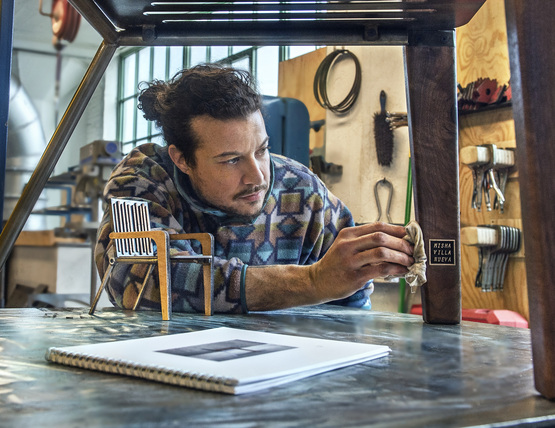 About 17 years ago, Villanueva—a certified Harley-Davidson technician—graduated from Motorcycle Mechanics Institute in Orlando, then learned how to weld during an apprenticeship in metal fabrication. Villanueva always had a drive to design his own creations.

How did you transition from motorcycle technician to industrial designer?

I already had a sense of making or creating in my early 20s. After I graduated from motorcycle school in 2003, I did a one-year apprenticeship in metal fabrication. Then I started my own motorcycle shop in Orlando, building custom frames. It was going awesome, but in 2007 when the housing market crisis hit, motorcycles took a backseat to everything, and a lot of companies went out of business, including mine. I moved to New York City and fell into architectural metal fabrication, which is big there. My brother Jesse, a shoe designer in New York, hooked me up with a conceptual artist, and working with him I built a metal tree for a hotel in Milan. Also, Jesse and I started our own company, Thumpers, where I built my own motorcycles.

I was doing well in the architectural world, creating things designed by others, like doors for hotels, but I always had a sense that I could make my own designs. Then I suffered a herniated disc from working 24-hour shifts to finish some projects, and I realized I couldn’t be a metal fabricator my entire life.

How did you end up at CIA?

I met my wife, Sarah, in New York, and she was from Cleveland. When I injured my back, she told me about CIA, and said I could learn design there. I went online to check out the school, and it was amazing to see the products you can come up with as an industrial designer.

What's your biggest challenge as a non-traditional student?

Time management. We have two young sons, and sometimes I have to break away from school to take the older one to Kung Fu classes or soccer. I have to put aside time for family.

Has the age difference between you and other students made you uncomfortable?

No, it’s been great. I’ve always had a younger mindset and I like to joke around and have a good time. And I’ve learned a lot from the younger students. One of them taught me 3D printing. Young people are nonjaded and it’s awesome to be around them when they’re excited about learning something. And I’ve been able to help them in their welding and creating.

What’s one interesting thing people don’t know about you?

I’m a musician and have played xylophone and snare and bass drums. In the late 1990s I was a DJ in a hip-hop group. After meeting my wife, who is a choreographer, I started creating music for her performances.

Orientation kicked off today. Part of the program is to introduce students to our wonderful neighborhood, @inthecircleâand what a great day it was for that! Also, kudos to our Orientation Leaders, who are doing a great job of leading the tours! @CleveOrchestra @cbgarden @cwru https://t.co/9QX5By43gj

Thereâs a new procedure for entering our academic building that will help keep the CIA community healthy. Bonus: Itâs super easy! Let us walk you through it, and when you're finished watching, download CIA-specific instructions for the CampusClear app via https://t.co/vOH3QnLKk5. https://t.co/2UR2LOimLE