In Fall of 2020, five CIA students worked to bring the story of the Greater Cleveland Food Bank to film. 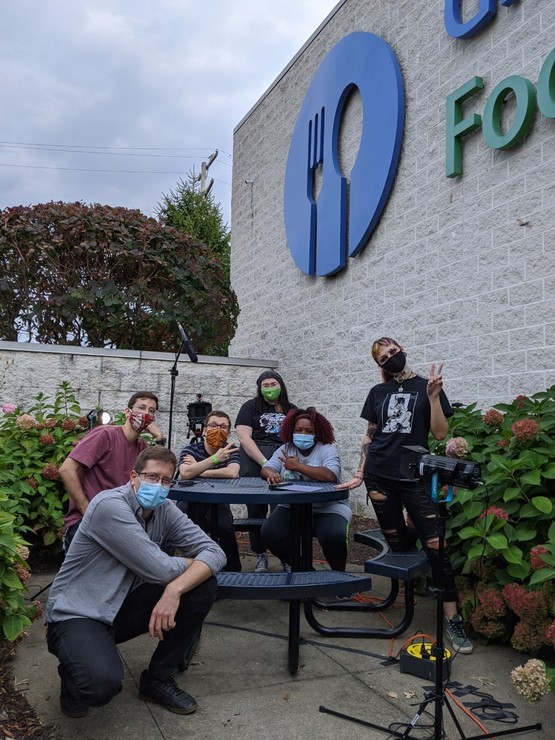 The work of the Greater Cleveland Food Bank would be worth heralding at any time, but the story is all the more important because of challenges the bank has faced during the 2020 global pandemic.

In Fall of 2020, five CIA students worked to bring that story to film. Combating Hunger: Greater Cleveland Food Bank's Resilience in the Face of a Pandemic is a 9-minute documentary created by students in Digital Cinema II. The group learned about the massive efforts of food bank workers while it gained the experience of working as a production team. The hope is that the film can boost interest in the food bank and what it accomplishes. (See film below.)

Faculty member Jacob Koestler made the initial contacts for the project and guided the production, which was done by students Kayla Cafero, Liam Darby, Sydney Nicole Kay, Philip Kline and Kaliban Zehe.

Economic fallout from COVID-19 has forced unprecedented numbers of residents of Northeast Ohio to rely on food bank services. Working with more than 1,000 programs and agencies in the region, the bank provides hot meals as well as ingredients for food pantries that keep those in need from going hungry. This year, the food bank has been preparing an average of 6,500 meals a day, increasing to 8,500 a day when children are out of school.

To tell that story, the Digital Cinema II students worked on every aspect of the film, including story conception, setting up interviews, capturing footage and sound, selecting music and editing. The overall experience “really takes a deep dive into all aspects of digital-cinema making,” Koestler said.

The food bank and its mission made for a worthy short documentary, and the class got it done safely by holding virtual meetings, wearing masks and using equipment that allowed them to stay a safe distance from interviewees.

Student Liam Darby noted that Cleveland is “one of the few food banks that has a hot kitchen,” and the team caught that bustling activity.

They also talked with some of the food recipients who show up weekly to join a long line of vehicles at the city's municipal parking lot where, in normal years, Browns fans hold their tailgate parties. While many in the line declined to talk on camera, those who spoke brought important context to the story.

“Some people in the world are worse off than we are, and they don’t have the virus, it’s just their way of life,” one woman told them. “We’re going to get through it.”

And the Student Academy Awards Bronze Medal goes to ... Teagan Barrone! We're so proud of Teagan, a 2021 Animation grad, for her accomplishment and award-winning work, âSlumber with Snakesâ! #StudentAcademyAwards https://t.co/8I6Jqot68f