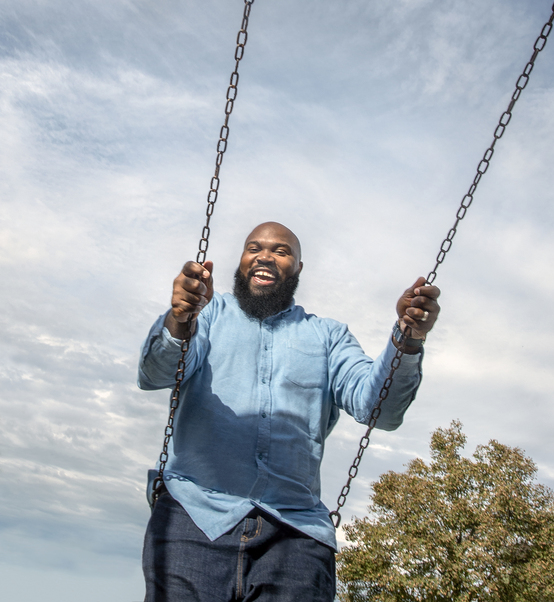 As summer blazed outside, fans whirred in Darius Steward’s East Side home. Leading guests to his studio upstairs, he thought aloud about the emails he owed galleries and museum curators. “When everybody’s on vacation, I want to remind them that I’m still working,” Steward said.

And he has been working at a startling pace. In fall of 2019, Steward ’08 had a solo show at the Bonfoey Gallery, had work in another at SPACES and at the Artists Archives of the Western Reserve, and he was commissioned to paint a mural for the Cavs’ revamped Rocket Mortgage FieldHouse. Steward also co-directs Currently Under Curation, a fellowship program for Cleveland teens at the Cleveland Museum of Art.

Though his artistic output has been relentless, quality has not been sacrificed. He has developed an unmistakable style of watercolor portraiture, lovingly practiced on his own family. A self-described minimalist, Steward situates the human figure—or, more frequently, the human face—in bare white space. His two young children, daughter Emily and son Darius, are his most frequent subjects. He shows them at play, at rest, distracted and off-guard, staring at the viewer with undivided attention. Their skin and clothes are brought to life with reds, purples, greens, blues and warm browns.

Steward’s drive reaches back at least seven years. In 2012, he launched his career at the William Busta Gallery. After that, however, he hit something of a rut. He responded by increasing his output, hoping to become too prolific to be ignored.

In 2016, he received a Creative Workforce Fellowship through Cuyahoga Arts & Culture, and his career took off. At least 13 museums have collected his work or expressed intentions to do so, and he has work in collections at the Cleveland Clinic, MetroHealth and the Federal Reserve Bank of Cleveland.

A second breakthrough—or rather, a series of them—occurred in 2018. That year, he was commissioned to illustrate for the investigative podcast Serial. His paintings were included in The Great Lakes Project, an exhibition in CIA’s Reinberger Gallery that was part of the inaugural event by FRONT International. Finally, he won a Cleveland Arts Prize, joining a cohort of legendary artists and cultural leaders.

“To think that my name is attached to some of those great people. I mean, Toni Morrison won a Cleveland Arts Prize, right?” Steward said. “That’s huge for me.”

Steward’s work in watercolor in part reflects his desire to resist expected paths. Oil has perhaps the most esteemed history of any painting medium in Western art. He feels the weight of that and wants his art to stand apart.

“I’m a minimalist at heart,” he said. “Anything I feel as dead weight on the essential things, I’m always up to getting rid of it.”

He paints on stiff, Japanese-style paper propped up nearly vertically on an easel. Steward exercises careful control over his paint to counteract gravity. But he cannot allow his focus on individual brushstrokes to detract from his view of the whole canvas. Composition is key; white space cannot take up too much of the surface, but neither can his figures be too in-your-face.

Steward's art also offers social commentary. Swingsets symbolize the incredible effort society exerts just to stay in the same place. His “Baggage Claim” series depicts himself or a family member alone, surrounded by luggage, looking around as though they don’t know where they are going and burdened by the history they carry. His “Breaker of Chains” mural was inspired by the legal limbo immigrant children occupy while political policy is debated. The painting depicts people of different races and dress styles separated by chain-link fences, which gradually fade and allow them to mingle.

Since graduating from CIA in 2008, Steward has mentored a number of students, offering pointers on strengthening their creative processes and discussing the value of graduate school. His repeated advice is to cultivate authenticity, to develop work that draws audiences into the artist’s own perspective and preoccupations.

“The thing is to find something you like and to find a way to craft that, and find a way to make it relevant to other people,” he said. “The trick is to sell people on what you like.” 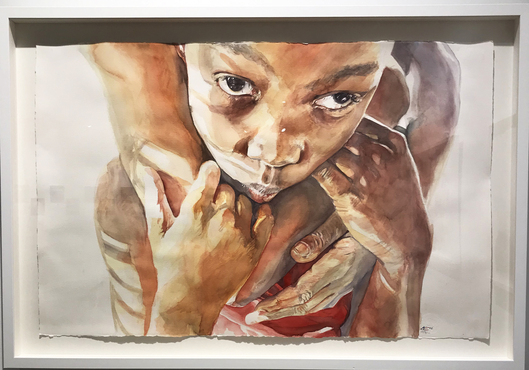 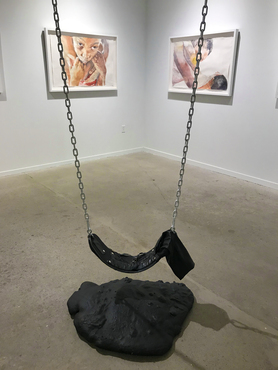 In preparation for fall semester, nearly 100 plastic partitions have been added to the studio spaces used by Industrial Design, Graphic Design and Interior Architecture studentsâthanks in large part to our Fabrication Studios team. https://t.co/DZAkTpI4sZ

Installing plastic partitions and reducing room occupancy levels are among the protective measures CIA is taking for fall semesterâas seen here in the Room 203 computer lab, where stations were reduced from 24 to 16 to allow for more spacing. https://t.co/CdMbShSlKj