Stars, snow and a quick little fox come alive under the dome 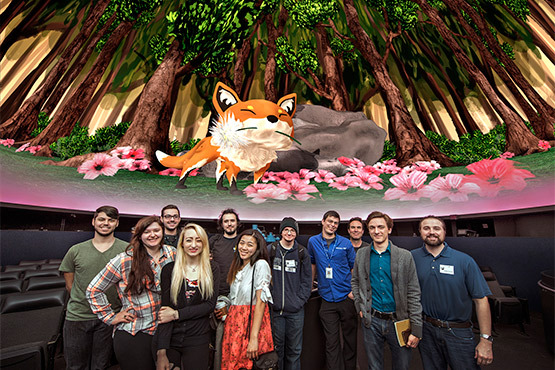 Creating animation for a giant, curved screen is a daunting challenge. But the obstacles were overcome beautifully this year by 13 Cleveland Institute of Art animators and their collaborators in 360° of Sight + Sound: The Planetarium Project.

Snowflakes dance, fishes fly, and a fox finds flowers in a color-collage forest in the new series of animated shorts created by the student artists in collaboration with student composers at the Cleveland Institute of Music. The series, created in partnership with the Cleveland Museum of Natural History, debuted April 11 at the museum’s Shafran Planetarium. Public screenings are scheduled for 7pm April 20 and May 11.

The 30-minute collection of five short films treats viewers to an immersive visual experience under the dome, accompanied by a range of original scores.

Anthony Scalmato, chair of CIA’s animation and game design departments, said the biggest challenge for the artists was using the technology to make the images wrap around the dome correctly. “The question was, how do you take a canvas that we are used to developing, which is a square, and turn that into a Planetarium dome?” he said. “We are used to working in a square.”

Aside from that, he said, the artists had the needed experience. “The faculty has been training these students to develop work like this, and now this is their opportunity to actually put those skills to use in a real-world project for the public to see.”

The creative process began late last summer, when CIM composers shared their musical ideas with the CIA animators. The result is five eye-catching shorts: “Snø,” “Arrow,” “Wisteria,” “See the Sea,” and “The Desert: From Dawn to Dusk.”

“We had never done something on this scale,” said Daniel Sevcik, a junior in the animation department at CIA. “This was the first giant project we had done from start to finish, in terms of conceptualizing it, storyboarding, figuring out the colors, and what we wanted the characters to be.”

Sevcik worked with fellow animation major Dylan Kamalay and illustration major Deni Lance to create the adventures of a traveling snowflake. “It involved learning some new software programs, and that was really helpful,” said Kamalay. “In the future, we can produce something faster and more efficiently.”

“At CIM, we have a plethora of different programs that we are allowed to use to create a variety of instruments, everything from a full symphony orchestra to a DJ concert,” said Head. “We really have every single musical thing you can imagine in our studio.”

For “Wisteria,” the story of a fox navigating a Japanese forest, Head went old school, playing and recording three Japanese flutes, which helped color the atmosphere of bonsai trees and spiritual statues.

This is the third time since 2012 that the institutions have combined to create works for the domed screen.

“It’s a great opportunity for our students to work with artists outside their discipline and to practice the skills they’ve learned through our film-scoring program,” said Keith Fitch, CIM’s composition chair. All CIM undergraduates take a two-semester electronic sound production sequence, which focuses on film scoring.

“I think this is the best group of films we’ve ever done,” said Fitch.

Another rave review came from CIA’s Sevcik, who can now relate to the opening night jitters of a Hollywood premiere.

“It’s very exciting, but also a huge sigh of relief,” he said. “After working so hard on something, to see it up on a big screen, and knowing a bunch of other people are going to see it and hopefully get something out of it, that’s truly awesome.”