âWhen you allow yourself to fail, or just to be silly, there are always little surprises that unlock endless opportunities.â 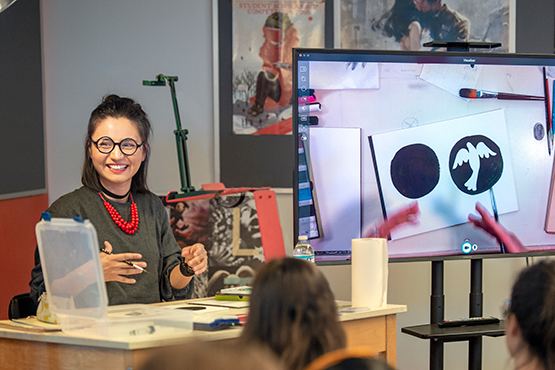 With more than 270,000 Instagram followers, dozens of illustrated-book projects and brand collaborations under her belt, illustrator Dinara Mirtalipova is always busy creating her beautiful, folk-art inspired paintings. Maybe you’ve read her own book, Imagine a Forest, seen the luscious boxes she designed for Godiva chocolates or the wall mural she made for Anthropologie.

Born in Uzbekistan and now living in Sagamore Hills, Ohio, Dinara was one of the guest speakers at the Cleveland Institute of Art’s weeklong Spring Show celebration.

You’re from Uzbekistan. How did you end up in the United States?
My family moved here 11 years ago, we’re immigrants. I came here with a degree in computer science. I thought it would be very easy to get a job.

Had you always done art?
I was kind of artsy, but then my family was very artsy, and it was considered a norm—nothing extraordinary. My mom was crafty, she had a day job but in the evening she would be doing embroidery or knitting or making costumes for us for shows and plays. My uncles and aunts and my grandma and grandpas were all kind of creative. I was doodling my whole childhood, but I was never a prodigy child. I never considered myself an artist, it was just my way of relaxing.

How did you make the switch from computer science to illustration?
The first year [in Cleveland] I worked as a housekeeper. The owner of a hotel rented us a room. Slowly I was getting used to English, then slowly they upgraded me to working at the desk.

I stumbled upon an opening at American Greetings when they were hiring for entry level part-timers. The only qualification was you had to be able to handle scissors and cut out templates. It was a very basic job. As soon as I answered it, it was like a playground. Golden gates just opened.

I discovered a library there, and I was really interested in developing as a professional and becoming better at illustration. They had workshops, amazing speakers, libraries, demonstrations. All that was required was passion and that I was willing to go home and try it on my own, come back and do your portfolio, be OK with rejection, then go home and do it again.

And eventually you became an illustrator there, right?
Yes. I moved from department to department, having different positions and duties, but eventually they hired me full-time. But when my daughter was born, because she was very challenging and didn't sleep at nights, I decided it was best if I leave completely. So I stayed home with her.

How did you break through in illustration?
By working at home and not worrying about the trends, not worrying about what’s popular or what others think about my art, and just exploring myself from the inside. It was very personal. Then, as I was working on my personal art, I was getting excited because I wanted to do more of it. I could see opportunities.

Talk about the folklore influence and where that comes from. When you were a child, was there a lot of folk imagery in your world?
I never really noticed how much it was around. We had carpets on the walls, wall hangings, carpets on the floor, and carpets on the furniture—it was ridiculous. But of course growing up in that environment, I was more interested in the western culture, wanting to wear jeans, listen to rock music. I was actually very eager to break away from it because it was not cool.

But then when my daughter was born, [and I was] singing her those songs my grandma used to sing, I became kind of nostalgic for the past. We’re in this house with white walls and modern furniture and I all of a sudden I became very thirsty for some of the colorful elements of the past.

What was your first great project?
I like doing books. Imagine a Forest is the one about my folk art. It was initially pitched as a how-to book, but as I was writing it, it became more personal.

Do you ever wake up and not feel like making art? And what do you do about it?
When it’s for a client, I feel almost robotic about it, because I know what I’m supposed to do and what’s expected, so it’s pretty much just showing up.

But when it’s personal work, I like to step away from two-dimensional work and do little projects that are dimensional. For example, I love painting on wood, it’s different from paper. I do Easter eggs every year because I feel very nostalgic for my past, and my grandma used to do it, and it’s a dimensional object, so there’s a very different relationship between the object and paint. I like painting matryoshka dolls because it’s three dimensional and challenging.

My daughter is at the age where I can take her to workshops with me now. We did a workshop at the Morgan Conservatory, paper masks. It was amazing. Working with paper, it’s completely different from what I do normally. It’s pasting, gluing, bending paper, and pretty much sculpting with paper.

When you branch out like that, is it a breather or do you think about how you could use it in your regular art?
No, that's not the goal. I don't think about applying it. I call it a creative playground, where you allow yourself to play for the sake of fun. As soon as you have high expectations from playing around, all of a sudden the fun is lost and it’s like the work has been jinxed. When you allow yourself to fail, or just to be silly, there are always little surprises that unlock endless opportunities.

Do you do use sketchbooks all the time?
I separate sketchbooks and art books. My sketchbooks are not pretty or presentable at all. They are ugly and private. It’s just me working over and over. For example, hands are very difficult [to draw]. It’s OK to have those private books where you can figure things out and not worry about the judgment of others.

Then I also have art books, and that’s where I explore different techniques. For example, in these books, I have [one] dedicated to cutting and pasting. They’re so fun.

What advice do you have for young illustrators?
I still feel like I’m not in the position of giving advice!

You have to be professional about what you’re agreeing to, and showing up is more important than talent. Don’t worry so much about being polished or finished or beautiful, but worry more about showing up.

And never apologize for your work. No, it’s done.