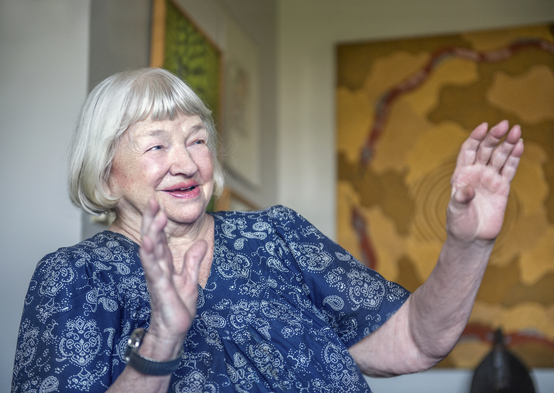 For a small glimpse into Ann Roulet’s outsized impact on Cleveland Institute of Art students, look no further than at how she nudged Andy Yoder ’82 toward a career-launching opportunity.

Renowned multimedia artist Red Grooms was publishing a book and Roulet suggested to Yoder, then a student, that he’d be the right person to design its cover because his work resonated with Grooms, recounted Roulet’s daughter, Laura Hernandez-Roulet.

Yoder volunteered to do it, and at a subsequent book signing in Cleveland’s Higbee’s Department Store, Grooms praised Yoder’s efforts. He told Yoder to look him up if he was in New York, which Yoder did. Working as Grooms’ studio assistant became Yoder’s first job out of CIA.

“She was always very devoted to the students,” Hernandez-Roulet says. “All of her former students have told me they felt they really had someone on their side, someone who responded to their needs.”

Ann Roulet, Faculty and Dean Emerita of the Cleveland Institute of Art and a much beloved figure throughout the community during her 35-year career, passed away March 7, 2021. She was 88.

Roulet began at CIA as a professor of English. She was a Charles Dickens scholar but also an avid reader of contemporary literature. She encouraged reading among her art students by introducing them to books she believed would speak to them, such as James Joyce’s A Portrait of the Artist as a Young Man and Rainer Maria Rilke’s Letters to a Young Poet. Hernandez-Roulet said her mother also was at the forefront of teaching Latin American literature, including works by Gabriel García Márquez, during the 1970s.

Roulet and her husband, Dr. Norman Roulet, would for many years host Christmas and graduation parties for the CIA community. The parties grew famous, Hernandez-Roulet recalled.

The Roulets also were avid art collectors and regularly invited CIA students to their home to see the collection and to model collecting art. Countless pieces by faculty and students were in their collection, the majority of which was auctioned to support the establishment of the Ann and Norman Roulet Student + Alumni Gallery, which opened in 2015 as part of CIA’s campus unification project.

“Both of my parents wanted to support a gallery for students and alumni,” Hernandez-Roulet says. “They both felt strongly that it was important that in an art school there be a place for people who are closely connected to the school to show their work on a continuing basis.”

Before passing, Roulet also established an endowment fund to support student safety. Much earlier in her career, she also was instrumental in getting accreditation for CIA.

“That was an important priority for her—that you’d have a real BFA degree that involved academic classes as well as art classes,” Hernandez-Roulet says.

Roulet’s advocacy for students and her championing of their successes, as well as her welcoming spirit and academic leadership, will be remembered at CIA for generations to come.

A celebration of her life will take place at CIA when it is deemed safe to gather again. The family prefers that those who wish to make contributions in her name do so to CIA at cia.edu/donate or to 11610 Euclid Ave., Cleveland, OH 44106.