A 9-year-old course helps artists find their voices on issues close to their hearts. 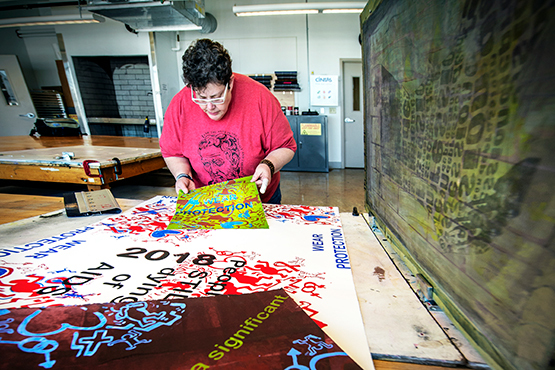 In wartime, propaganda is used to mobilize patriots, sometimes against their own self-interest. In peacetime, propaganda can draw lines between “us” and “them,” fouling the air with hostility until times cease to be peaceful.

“Propaganda” is a provocative term. And that is exactly why Maggie Denk-Leigh named her course after it.

Denk-Leigh is chair of the Cleveland Institute of Art’s Printmaking Department and president of the board of directors at the Morgan Conservatory, the Cleveland-based arts center dedicated to preserving and advancing the art of papermaking. Since 2010, she has taught CIA’s course called Propaganda: Media, Dissemination, and Technique, which connects students to the history of printmaking and to the community at large.

“We needed to serve a challenge to students in visual arts and printmaking,” Denk-Leigh said. The course forces students to consider what their art expresses about social life, and what effects those expressions exert. “[Students] haven’t thought of their work in this way before.”

A course assignment sheet defines propaganda as a “particular synthesis” of selected facts that are capable of lying by omission. These loaded messages are crafted to produce “an emotional rather than rational response.” To avoid reflexive responses to these appeals—and to understand their own potential to be manipulators—students must understand what propagandists are trying to accomplish, and how they do it.

This search for understanding involves study of politicized art in the history of printmaking. Students eventually are asked to respond to propaganda from World War II and the Vietnam era, but that is not where they begin. Instead, Denk-Leigh first teaches about the radical collective Fluxus. Later, students study Andy Warhol, Barbara Kruger, and Shepard Fairey.

“It’s important to me to make sure we have a class that doesn’t lose the history and context of the print field,” she said.

On the technical side, the course is the College’s primary instructional class for silkscreen, one of the most popular and versatile printing techniques. It allows for the creation of bold images on materials as varied as paper, textiles, wood, and ceramics. Propaganda students have produced objects as diverse as bumper stickers, zines, keychains, bags, and coasters. For various assignments, students are asked to design and market a fictional product, and appropriate existing imagery to subvert its original intent.

On the qualitative side, students are encouraged to cultivate a voice, which is why it’s designed for upperclass students.

“It’s not until they have technical proficiency and confidence that they have a voice,” Denk-Leigh said.

For their final project, the Propaganda students create work around a cause of their own choosing, in partnership with a community organization. Students have addressed topics including the 2016 election, post-traumatic stress suffered by emergency medical technicians, and the tendency for black men to be portrayed in the media as threatening.

Amirah Cunningham double majored in Printmaking and Drawing. Since graduating in 2018, Cunningham has worked for a T-shirt company and exhibited in galleries including BAYarts and Waterloo Arts.

She wasn’t sure of what to expect when she enrolled in Propaganda. “I knew it would challenge me conceptually, and challenge my printmaking skill,” she said.

She used Propaganda as a way to refine ideas and techniques for her thesis project, a visual examination of the connections between the history of slavery and contemporary disenfranchisement and incarceration of African Americans. “I feel like I really pushed the limits of by work in that class,” Cunningham said.

Cameron Bartkus took Propaganda before his 2017 graduation from CIA’s graphic design program. He had fallen in love with printmaking and wanted to counter a prominent narrative about his hometown, the Appalachian city of Monongahela, Pennsylvania.

During the 2016 presidential campaign, Donald Trump blamed federal environmental policies for lost jobs in the coal sectors, and promised to roll back regulation. Bartkus’ Propaganda project, based on a series of photographs taken in rural Pennsylvania, was an attempt to document the more complex reality of coal country.

“It wasn’t necessarily anti-coal. We were being turned into an example propagated in a media campaign,” said Bartkus. He wanted to offer a more realistic picture of coal’s impact on the environment and on people call coal country home.

“The critiques were especially valuable. Hearing people understand the message from a raw standpoint was helpful,” Bartkus said of the constructive relationships between Propaganda students. Instructor feedback was also invaluable. “I honestly can think back to each and every time we had a one-on-one. She opened my eyes to things not strictly about the class, and reconsider everything I was doing.”