Six CIA grads to study in the U.S., Mexico, Europe and beyond 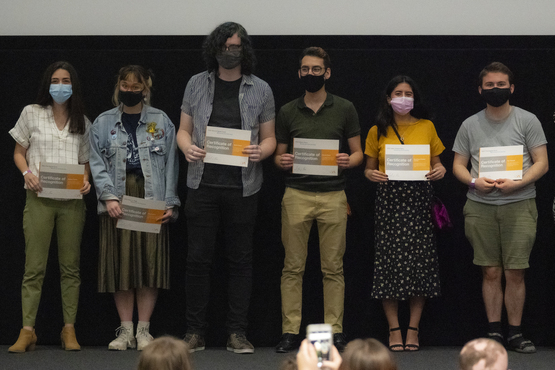 Six Class of 2022 graduates have earned President’s Traveling Scholarships from the Cleveland Institute of Art.

Recipients of these scholarships, which are awarded each spring to graduating seniors, receive money toward travel that allows them to dive deeper into their creative process.

“For well over 100 years, CIA’s Traveling Scholarships have enabled a select number of graduating seniors to extend their education and prepare significant art and design projects through research and travel. To many, it is the highest honor the institution can pay its graduates,” says President + CEO Grafton Nunes. “Students submit a rigorous application of proposal, budget and portfolio, which is in turn reviewed by a faculty committee and the president. Out of 20 finalists, six are selected for the named scholarships, which range from $3,000 to $4,500. This year’s recipients continue a great tradition, exploring roots, expanding horizons, testing suppositions and learning new skills. I could not be more proud.”

Lizzini, from Cleveland, earned the First Agnes Gund Traveling Award. Her practice employs reportage drawing as a way to enter and connect with communities with which she's unfamiliar, resulting in socially engaged community projects. Her thesis project involved doing that in Cleveland to rediscover her hometown.

With her scholarship, Lizzini will lead free workshops in New York City, New Orleans and Bari, Italy, the city from which her family originates. Drawing alongside others in new, urban locations will allow her to better understand their social dynamics and therefore continue making work through a social lens. She also hopes to gain teaching experience and to encourage others' creativity along the way.

Goss, from St. Louis, earned the Second Agnes Gund Traveling Award. His practice involves making furniture and functional objects as a way of creating his own environments, and his goal is to develop his understanding of what it takes for a space to create an impactful experience and to build upon his skills and knowledge to better create work that will leave a lasting impression.

With his scholarship, Goss will take a research trip to three iconic examples of American architecture: Frank Lloyd Wright’s Fallingwater in Pennsylvania; Philip Johnson’s Glass House in Connecticut; and E. Fay Jones’s Thorncrown Chapel in Arkansas. Following his research, he'll participate in a two-week Home Design/Build workshop at the Yestermorrow Design/Build School in Vermont, where he’ll learn skills and techniques for designing a site-specific home and participate in its construction.

Enstad, from Bellingham, Wash., earned the Third Agnes Gund Traveling Award. His work is enmeshed with the language of textile. Fiber arts have long been a valuable form of connection and creativity for him, and he imagines his paintings as fields of fabric that flow and shift.

With his scholarship, Enstad will travel to Norway, where he'll pursue a deeper connection to his cultural roots through art. He'll research the rich history and practice of Norwegian fiber craft and visit museums in Oslo and Ose, and he'll visit the studio of Annemor Sundbø, who's famous in Norway for her expertise in wool and knitting history. Upon returning to Cleveland, he'll propose exhibitions of his work and research in Norway to local galleries.

Chavez Juarez, who was born in Mexico before moving to and growing up in Aurora, Ohio, earned the Helen Greene Perry Traveling Scholarship. Their BFA thesis was a book of illustrated poems relating to their identity as a Mexican living in a state of limbo in the U.S.

With their scholarship, Chavez Juarez plans to spend three to four months in Mexico City, Taxco and Oaxaca to explore Mexican arts and crafts with the goal of incorporating such elements into their work. Ultimately, they will visually journal their experiences, specifically recording influences that will bring them closer to their Mexican identity.

Lubey, from Depew, N.Y., earned the Mary C. Page Memorial Scholarship. Their work has focused in part on zines, which have historically been important tools—particularly within queer culture—connecting like-minded individuals and amplifying the voices of marginalized people. In fact, through CIA's Creativity Works program and in collaboration with the LGBT Center of Greater Cleveland and Outlandish Press, they released an edition of a collaborative zine featuring 25 local queer artists and writers. One of their post-graduate goals is to start a quarterly or semiannual zine that centers on queer folks and their experiences.

With their scholarship, Lubey will embark on a road trip that includes visits to literary presses, writers, and LGBTQ+ zine and bookstores. Specific stops will include Sarabande Books in Kentucky, Parnassus Books in Tennessee, Giovanni’s Room in Pennsylvania and Blue Stockings in New York, and the final destination will be the NY Queer Zine Fair in New York City.

Razo, from Painesville, Ohio, earned the Nancy Dunn Memorial Scholarship. In his practice, which includes designing and creating body adornments, he's motivated by attaining the same level of realism as classical sculpture.

With his scholarship, he will further his education through a rigorous four-week Figurative Sculpture workshop at The Florence Academy of the Arts in Italy. Through that course, he'll study composition, create a life-size portrait and half-life-size figure, and learn about casting with rubber/silicone. He also intends to visit museums that are home to some of his favorite marble sculptures, like David at the Accademia Gallery. Following his trip, he will create sculptures that stem from his internal, external and multicultural journey and hopes to showcase those works in various galleries.