From the start, sculptor and CIA alumna Susan Collett nourished both her art and her business. 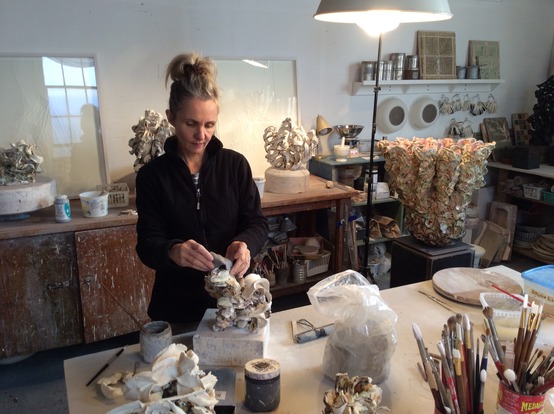 Toronto based artist Susan Collett works in both clay and printmaking. Photo courtesy of the artist.

As a child, Toronto-based sculptor Susan Collett ’86 vividly imagined becoming an artist, but she couldn’t have imagined that her art would inspire an invitation from Queen Elizabeth II. Even in adulthood she couldn’t imagine it. So a few years ago, when a notice arrived that a government letter awaited at the post office, she assumed she was being audited.

“I said to myself, well, they can just wait. I have a bookkeeper, and I do all my stuff on time, and they can just wait,” Collett recalls. Days later, she finally collected the letter. The envelope was beautiful. “I said, ‘Look at this waste of taxpayers’ money!’ And I open it up and it’s in gold lettering and it says, ‘You’re cordially invited to meet the Queen and Prince Philip for the opening of Canada House.’ So it was not an audit!”â¨â¨

Collett’s clay sculpture “Axis II” had been purchased by the Department of Foreign Affairs, Trade and Development Canada for the permanent collection of Canada House, which is the home of the High Commission of Canada to the United Kingdom.

Queen Elizabeth attended the official re-opening of the building on Trafalgar Square in February 2015. Collett met her and was able to see “Axis II” in its new home along with works by other Canadian artists. (One of her pieces also resides in the Canadian embassy in Washington, D.C.) Experiences such at these are “great financially, and also a great boost,” Collett says. “It gives you confidence. Those things are instrumental, too, because [as a studio artist], you’re pretty much alone.”â¨â¨She wouldn’t have it any other way. Ever since she received her bachelor of fine arts degree at CIA (Printmaking major; Ceramics minor), she has earned her living from art — primarily through creating and selling her beautiful hand-built clay sculptures, as well monoprints.

Her work is represented by high-end galleries throughout Canada, and has been acquired by Museums (the Musee des Beaux Arts, Montreal; Sevres Porcelain Museum; Gardiner Museum of Ceramic Art in Toronto), by commercial collections, and individuals in India, Paris, China, Hungary, the U.S. and Canada.

â¨She has spent virtually every day since she graduated from CIA in the studio, though in October she slipped on leaves while delivering flowers to a friend and suffered a serious leg fracture; she has been off her feet and away from clay for months. The forced interruption pointed up how much Collett relies on her work to buoy her health, inside out and out.

“I’ve never had to meditate, never had any problems with depression,” Collett says. In the absence of studio time, she has been drawing in her sketchbook and learning to adjust. In a way, that’s what it means to be a full-time studio artist, she says. Every technique, skill or situation that you master gives way to new variables, and the learning starts all over again. â¨â¨“I think my strength is my lack of confidence,” Collett says. “I am constantly questioning myself and thinking that I know nothing, and how did I get here? And then I find it again. I can grow within that. I can question everything, because nothing’s constant, especially when working with a kiln and a printing press. I’ve gained strength from that. I don’t think I ever walk bravely into the room. The confidence comes from behind me and pushes me forward.”

â¨â¨As a lifelong Canadian, Collett’s decision to study at in the United States arose from a sense that she should truly get away for college. She checked out a school in Boston, but it didn’t feel right. Then a brochure for the Cleveland Institute of Art inspired a visit to Cleveland. “Now this is more like it,” She thought.

“He really changed my life,” she says. “I took printmaking as an elective, and I would put a print into every graphic design assignment. Dominic bought a print, which was incredible, and then he said ‘Why don’t you go wide? You can always narrow in later. Work on your fine art.’ And so I dropped out of graphic design.’”â¨â¨She moved to Printmaking, and late in her time at CIA — encouraged by Ceramics faculty member Judith Salomon — she discovered a love for Ceramics.

“I did come back to Toronto, but right after school I had some really great hands-on studio [time] with Judith Salomon, and learned everything about running an efficient studio, like having errand day on a certain day, and how to replenish and order materials. And I think from my father, with his background in business. I knew things like to pay yourself and invest in your business. I always was going to go into art. So I didn’t question it. I was going to have my own studio.” â¨â¨She calls her early post-college education “a long stream of seed-planting.” She worked at the Gardiner Museum of Ceramic Art in Toronto, where she beefed up her knowledge of ceramics and met volunteers who were early purchasers of her work, and with whom she still keeps in contact. She also taught art, at the Toronto Montessori School and then taught other teachers to teach art as a stepping-stone of income before going full time in the studio.

“I didn’t take an unrelated job,” she says. “I took every job to inform me, with an intention of having my own studio.”â¨â¨ She also built up the skills that support the business of art. When she realized that she didn’t really know how to pack fragile work for shipping, she paid a professional packer to give her a lesson.

“That allowed me to feel comfortable going forward in other areas, like international outreach, because I’m not afraid,” she says. “I know how to pack.”

Over the years, she was able to gradually increase the number of studio days each week. “Since 1993, it’s fulltime making a living from my artwork,” she says. â¨â¨While today she has the luxury of working exclusively on high-end sculptural pieces, there were stepping stones along the way that included a custom, handmade tile fireplace installation, commissions for art consultants, work for a Canadian design company that supplied Neiman Marcus and Saks Fifth Avenue (where timing and business skills were key), and making short runs of utilitarian pieces — berry bowls, olive trays, lemon squeezers.

Those went by the wayside as she accumulated an audience for more complex work. “You have to let it go forward as things develop and work hard at it, no one will care more about your art practice more than you will,” she says.

In June 2017, Collett had a show called Concurrents at the Sandra Ainsley Gallery in Toronto. It encompassed three bodies of clay works plus prints.

“The Racine series is the tumbleweed form with the liquid clay that has a rolling, cumulative shape that often crescendos in liquid gold or silver, or a colored bud at the end. Those are ideas about however dark things turn, there’s always a hopefulness, there’s always a going forward in your life,” she says.

“That whole series built forward from the Aggregate series, with the colors, and different forms and platelets of clay that are colliding up against each other.

“And that references the period before that, which was about light, and how my earlier works always were pierced, and I was always looking for light,” Collett says. “That’s the Labyrinth series.”

The ideas emerge in and out of the studio. Collett is always making observational sketches, too, but she doesn’t draw works in order to sculpt them. “Who could draw my clay work? It’s so complex. And the glazing is multifiring over a dozen times often, in and out of the kiln.”

â¨That development — the organic give and take between the artist and the process — are part of the magic of the work for Collett.

“I’m always allowing for that shift,” she says. “Maybe it’s why I’m not so scared of having my own business, because you just have to be used to that shifting under your feet all the time.”

Happy Thanksgiving! ð¦ The CIA community is made up of so many wonderful people. We are thankful for our amazing staff, faculty, community members and students! Thank you for being part of the CIA community! ð§¡ #CIACommunity #Thanksgiving2022 #ArtInCLE #Thankful https://t.co/GMtHHiiy7r

Thank you for celebrating our 140th Birthday this week! ð§¡ Our final picture of the week features John Ewing and Molly Beck, Director and Assistant Director of the Cinematheque. The photo was taken in 1990! #CIACreates #CIAAlumniCreate #140Celebration https://t.co/mag2ByH3Mn