Students in Creativity Works, a self-directed internship for juniors in visual arts and crafts majors, pushed through pandemic challenges this spring and summer to rethink project plans and keep commitments to external partner 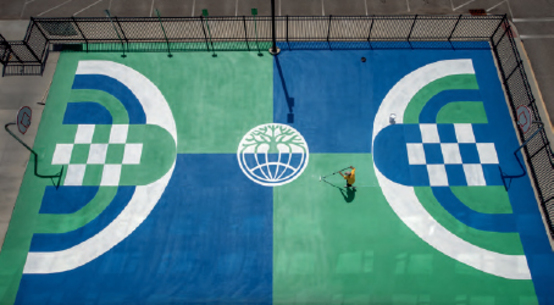 Students in Creativity Works, a self-directed internship for juniors in visual arts and crafts majors, pushed through pandemic challenges this spring and summer to rethink project plans and keep commitments to external partners.

Drawing major Nick Birnie spent mid-July adding vibrant colors to the basketball and four-square courts at Campus International School, a K–8 school in Cleveland. The school’s colors—blue, green, white—cover every inch of the basketball court, the school’s logo represents the center circle at half-court, and the keys under each basket have a checkerboard design.

Birnie considered Creativity Works a “big-time learning experience.” One lesson involved funding. As his project moved forward, he encountered more steps than anticipated, which meant addi-tional dollars were needed. Through Creativity Works, he connected with the Sherwin-Williams Foundation, which helped him buy the paint.

“This project wouldn’t be happening without that donation,” Birnie says.

In July, another Creativity Works project, the exhibition Doing A Gender, premiered online at doingagender.com and at Praxis Fiber Workshop in Cleveland, where it could be viewed by appointment.

The show explores gender roles and how they’re reinforced by society and media. It includes work by Drawing majors Kaitlyn McKanna, Ash Sark, Samantha Schneider and Amani Williams. (Sark and Schneider are double majoring in Painting.) The four found value in the framework and partnerships Creativity Works provides.

“It’s really wonderful to have that support—someone to go to when you have questions, when you’re not sure how to word an email or how to conduct yourself when talking to an institution, gallery director or other professionals,” Williams says.

Industrial Design major Misha Villanueva’s “Land of the Free?” was to be unveiled in June on the side of a building in Cleveland’s Larchmere neighborhood. The mural, measuring more than 13 feet long by 6 feet high, depicts an American flag made of ceramic cast from prison cafeteria trays. It aims to spark discussion around mass incarceration’s impact on families, and Villanueva hopes to find a permanent, public home for it in an area dispropor-tionately affected by mass incarceration.

Creativity Works is supported by the G.R. Lincoln Family Foundation and the Fenn Educational Fund of the Cleveland Foundation.