News . Feature Stories . On the other side of the generational divide

On the other side of the generational divide 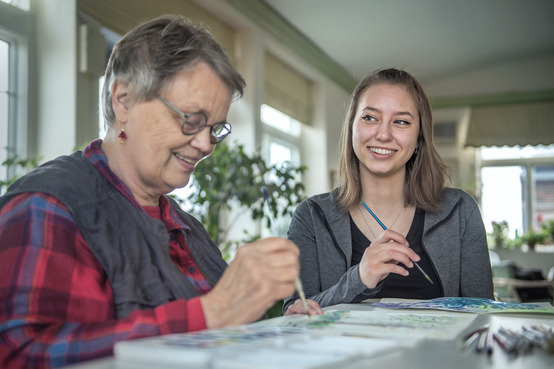 Anna Lattanzio spends part of her time at Judson painting with other residents. Photo by Robert Muller/CIA

Walk into the elegant lobby of the Judson Manor retirement community, with its ornate woodwork, vintage chandeliers, marble floors and master plaster work, and you’re whisked back to the 1920s, when the majestic building opened as Wade Park Manor, one of the finest hotels between New York and Chicago.

Mark Corcoran, 68, who has lived at the Manor since 2013, calls the regal, 11-story building a grande dame. To CIA sophomores Anna Lattanzio and Ryan Laganson, it’s also a grande dorm.

Lattanzio and Laganson live in the stately retirement building on East 107th Street overlooking the Cleveland Museum of Art’s Wade Lagoon. Their apartments are free, thanks to Judson’s unique artist-in-residence program, which immerses students from CIA and the Cleveland Institute of Music into its retirement communities on University Circle.

In exchange for housing, the art students promise to work five hours a week on artistic programming – lectures, classes, workshops – for the residents.

But there’s a lot more going on than those contractual obligations. Laganson, 20, and Lattanzio, 19, have become part of the Judson Manor community, living and socializing with folks who are four, even five, times their age. They connect during morning coffee, in the elevator, at the mailboxes, doing laundry or just relaxing in the lobby. They’ve brought residents to visit CIA and led groups on tours at the art museum.

They consider many of the Manor’s 100-or-so residents friends. Others are more “grandparenty,” says Lattanzio. And others are, for now at least, just polite acquaintances.

Their two-year residencies began a month before the school year began, in August 2016. It didn’t take long for stereotypes to wilt away.

“I was surprised how young the residents act,” says Laganson, an ebullient and energetic Interior Architecture major. “One resident, she’s 92. She waters all the plants on the rooftop garden by herself. Then she comes down and she waters all the bushes. It’s kind of inspirational: Yeah, she can be 92 and still rock it.”

Lattanzio, a Photography major, had her eyes opened, too. “Within the first week of moving here, we were hanging around in the lobby,” she remembers. “One of the residents was talking to us, and she was saying these really sassy things. I was like, ‘You’re old. You’re not supposed to say those kinds of things!’”

The stereotypes in the other direction have been broken as well. There have been no keg parties, no late-night music, no unusual smells and no problems, aside from a student a few years ago who liked to light candles in her apartment, says Kristina Kuprevicius, Judson’s director of marketing and community partnerships.

The screening process for CIA students who want to become “early retirees” is thorough. Students submit a résumé, an essay, reference letters and sample programming ideas. Finalists face a committee of Judson staff and residents.

Corcoran, who lives at the Manor with his husband, Bill, served on the committee that eventually selected Laganson and Lattanzio.

“They just had something that other candidates didn't have,” he remembers. “There was this instant likability and relatablilty, both of them. We saw really wonderful, gracious, warm personalities. They were pretty unanimously chosen by our committee.”

The Corcorans both have extensive experience in theater, and last year they launched Theatre in the Circle, a community company based at Judson Manor. When they needed help with their sets, they reached out to Lattanzio and Laganson.

Lattanzio shot stunning portraits of the cast of “Jacques Brel is Alive and Well and Living in Paris.” Those photos became the backdrop of the set for the show that played to sold-out audiences in February in the Manor’s ballroom.

Last October, the Corcorans staged “Eddie,” a musical about the life and work of Edgar Allan Poe. Laganson helped with the set design and projections.

“I was so impressed,” says Mark Corcoran. “I tell you, both kids were just cooperative and cheerful all the way, saying, ‘What else can I do? What else can I do?’ They bring a wonderful vitality to this building and to all of our lives.”

The emotional payoff goes both ways. During Laganson and Lattanzio’s art programs, which range from lectures on Pop Art to workshops on bookmaking to classes on portrait drawing, residents bring a fresh curiosity and a unique perspective.

“They’re always enthusiastic to try things, no matter what they are,” says Lattanzio. “They’re amazing. As long as they’re doing art, they’re happy.”

“Most of them are goal-oriented,” says Laganson. “A lot of them are interested in the end result, not the process. That makes it interesting.”

That’s no surprise, says Corcoran. While Laganson and Lattanzio have decades ahead of them, residents at Manor deal face their mortality every day.

“We don't buy green bananas around here,” he says. “We don't know that we have the luxury of five years or 10 years or next year or tomorrow. We want to see something for what we're doing now. We don’t fool around.”

The different ideas, attitudes and surroundings have kept the students grounded.

They are certain that the residents are making them better artists.

“I think it’s making me more open to things,” Lattanzio says. “A lot of the time, I’m like, ‘All right, this needs to be set this way.’ But then when the residents either don’t know how to follow through, or they don’t want to, it’s funny how their work turns out. It’s different, but it’s still nice. It’s definitely made me realize different ways of making art.”

“As an artist you do have to be adaptable,” Laganson says. “You have to open your mind up to new situations and say, ‘Hey, wait, I can live with 85-year-old people and have a good time. It’s going to provide me a new way of thinking.’”