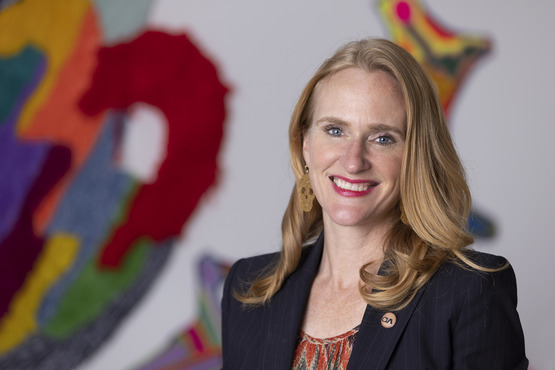 Kathryn Heidemann is all over town, dropping in on exhibitions showcasing artists from Cleveland and beyond. “Every night this week, I have a different FRONT International event,” she said in mid-July.

Heidemann wasn’t complaining, she was celebrating. Contemporary art is busting out all over Northeast Ohio, and the Cleveland Institute of Art is part of all of it. Scores of CIA faculty, staff and alumni have work in FRONT as well as the concurrent CAN Triennial.

And this is now her world.

On July 1, Heidemann became the College’s 11th president and CEO. She succeeds her mentor, Grafton Nunes, who in 2019 persuaded her to leave the assistant deanship she loved at Carnegie Mellon University in Pittsburgh to be CIA’s Senior Vice President of Academic Affairs and Dean of Faculty.

A force in arts education for decades and a fourth-generation educator, Heidemann is eager to broaden the impact of CIA, a school positioned to play a major role in the modernization of Cleveland.

Heidemann, 44, recently welcomed Greg Watts and Kari Weaver to CIA. Watts is the new Vice President of Academic Affairs and Dean of Faculty, Weaver the Director of the school’s brand-new Jane B. Nord Center for Teaching + Learning. The Nord Center aims to help CIA faculty hone their teaching skills and better support evolving needs of today’s learners. It is a key component of the 2020–25 Strategic Plan Heidemann helped formulate.

Nunes unified the campus, streamlined administration, smoothed out faculty relations, and kept CIA afloat through the pandemic. Now that her administration is in place, Heidemann plans to turn up the volume.

An inside job
When Heidemann joined CIA, she was focused on the innards of the school—especially when COVID was rampant.

During the last three years, she got to know faculty, students and staff, but there were no alumni events, and “all the things out there were closed, canceled, suspended. I feel that now, for the first time, I am finally starting to get an external view of what we do and really understand the broad reach that we have, even internationally.”

According to an internal poll, this fall’s incoming class is most excited for their CIA experience to provide independence, friends and community.

“Art and design are important,” she says, “but this is first and foremost a community, and these new students for the last couple of years have been deprived of that, of rites of passage they would have experienced had COVID not gotten in the way.

“Keeping our community safe has always been very important, because if we can’t be in-person, we don’t have a school,” she adds.

Heidemann worked on COVID planning even as she managed the school’s reaccreditation, a process that takes place every 10 years.

“A president’s initial role really is to understand the inside of an organization,” she says. “I already did that.” She laughs. “Now I’m ready to go out.”

The education of Kathryn Heidemann
Heidemann was born in Detroit and grew up there as well as in Australia, Venezuela and Germany.

Her brother is a chef, one sister is an art therapist and singer, and her other sister recently started at Toyota. Her mother holds both a master’s degree and bachelor’s degree in education and comes from a deeply rooted lineage of teachers and school administrators. Her father, a Vietnam veteran with an MBA and a bachelor’s degree in aeronautical engineering, worked in the operations division of Jeep, then a brand of AMC Motors.

In the early ’80s, Jeep was moving plants overseas, and the Heidemann family found itself outside Brisbane, Australia, where Kathryn learned how to read, write and speak (she has shed her Australian accent).

When Jeep shut down Australian operations, the Heidemanns relocated to Caracas. Four years of political upheaval and natural disasters in increasingly dangerous Venezuela—including being caught in a major flood—convinced the Heidemanns to return to Detroit. “We were driving home from school one day and there were kids, guerrillas with machine guns, and my Mom was, like, ‘We’re done,’” Heidemann recalls. “It was a wild time, it was a wonderful time. It got a little scary at the end.”

After a brief spell back in the States, the family relocated to Frankfurt just as the merger of Daimler and Chrysler (which acquired Jeep) was taking place. She ultimately graduated from high school in suburban Detroit.

“I thrive in diverse environments,” she says. “The converse is also true: I don’t thrive in homogenous environments. I chose to live in Shaker Heights because it’s so diverse. I love being around people who have had different experiences, speak different languages, who expose me to different foods, different music, different folklore.”

A different path
Heidemann could have been a rock star. She almost was as bassist in Rockit Girl, a Chicago group that recorded in the early aughts. She has been “famous-adjacent,” touring with some national bands; among her own are Garter Shake and Blindsider. For her 2017 wedding to architect Jonathan Golli, she assembled and played in an all-star cover band of her best friends. “I was in the band and had my wedding dress on,” she says. “It was a good time.”

Being in a rock band taught her the value of teamwork. “I’ve been a lead singer and a bass player, but I’ve always worked with a drummer, a guitarist and others to co-create,” she says. “I’ve probably learned more about leadership—stepping up to lead and stepping back to let others lead—in bands than anywhere else.”

After studying at the University of Michigan in Ann Arbor, she hankered for a larger city, ultimately earning her bachelor’s degree in performing arts management and dance from Columbia College in Chicago. She subsequently earned a master of arts management degree from Carnegie Mellon, then spent nearly two decades in Pittsburgh in arts management, including nearly five years as arts commissioner, appointed by then-mayor Bill Peduto. During her eight years with the Pittsburgh Cultural Trust, an organization similar to Playhouse Square, she bolstered downtown’s cultural district via placemaking, community-engagement and economic-development efforts.

During her nearly 10 years at Carnegie Mellon, Heidemann led and taught in the arts and entertainment management graduate programs in Pittsburgh, Los Angeles and Bologna (Italy). A champion for creativity and cross-sector disruption, she also co-founded the university’s Arts Management + Technology Laboratory research center and catalyzed innovation through her assistant deanship dual appointment within two of the university’s prominent colleges.

This polymath’s track record and passions—and her top spot at CIA—make Heidemann a natural to increase CIA’s involvement in the city of Cleveland.

Cleveland calling
While CIA has collaborated with arts organizations for years, it is upping the ante in linking to the Cleveland Foundation, the philanthropic organization behind a 12-acre, $400 million, high-tech innovation district coming to life between East 65th and East 66th streets. CIA plans to open an Interactive Media Lab in the MidTown Collaboration Center, which is expected to open in 2024.

“We’re at the big kids’ table,” Heidemann says. “It is really important that we are part of these conversations about how we can be drivers of innovation in Cleveland and beyond. It’s a new way of thinking about art and the art and design school’s role in society—and the artist’s and designer’s role in society.

“I think this is the perfect position to jump out far and to shout out loud that we’re here,” she says. “We have a lot of work to do, but I think the timing is good.”

But for the moment, she’s preparing to welcome the Class of 2026—the first freshman class of a new era. For that, she will bring both her experience in arts and education administration and her personal blend of gemütlichkeit.

“I’m an introverted extrovert,” Heidemann says. “I’m very peaceful in my own space, and I’m very independent. But I will talk to everybody and anybody, especially if I know they’re new to a city, new to an organization. I’m especially interested in being welcoming and helping others feel they have a sense of belonging where they are.”