Artist and 2012 grad doesn't mind starting over if it gets him where he wants to be. 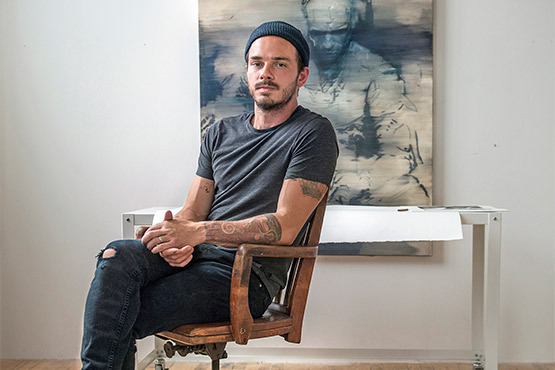 You might’ve heard about Matthew Sweeney on the news. In 2015, his home caught fire. Sweeney and his wife, Christa, were saved by their dog. All their possessions, including every piece of art, were lost.

Flash forward to 2018, and Sweeney, who graduated from CIA’s illustration program in 2012, is having a very good year. He supports Christa and their two young sons as a full-time freelance illustrator and a gallery artist. His client list includes American Greetings, Kalman & Pabst Photo Group, and chef Jonathan Sawyer. He has had two exhibitions of his series of large graphite hand drawings, and was commissioned to design a mural for a building not far from his studio at the 78th Street Studios in Cleveland.

Have you had any “aha” moments with your art?

When I was probably in middle school, I had a car magazine, and I was redrawing the cover and using that as reference. There was a girl in a bikini in front of the car, and I probably only got to the wheel and her legs, but I remember saying, “This wheel: If I could turn it a little bit and I could straighten her one leg, it's going to be a better image.” It probably took me 50 tries to redraw it the way I wanted, but I think when I got there, there was something in me that was like I had a superpower. It was like anything I could think of, I could draw it, if I just have the drive to erase and redraw it and keep on going until it is exactly how I'm imagining it.

When we were in school, that was one compliment that Mike [Miller ’12] gave me that stuck with me. It was like 1 o'clock in the morning, we were both next to each other working, and I can't remember how he said it, but he was like, “You don't mind restarting.” I brushed it off, but later I thought maybe he's right. I do not care about ripping something up and starting over.

Can you talk about the fire?

We bought a building in Gordon Square. I think it was built in 1893. It was a really cool building that needed a lot of work. We were two years in, and one night, it was like 2:30 or 3 in the morning, and my dog was just going crazy. Would not leave us alone. She's skittish to begin with, so at first we were kind of like, “Rue, go back to bed.” And then Christa sat up and said “I smell smoke.” I ran out of the room to the back of the building. I assumed I left the stove on or something, and that's where our kitchen was. I checked all around there, and then I could see the light coming from the back window, and I looked out and giant flames were coming out of our neighbor's building.

I ran back in the bedroom. Rue had run into our closet, so we were trying to figure out where she was. Christa's like six months pregnant, so we were really worried about the fumes. I found Rue, dragged her out, and we opened up the door to the hallway. You couldn't see anything in the hallway. But the stairs were right in front of us, so we were able to go down there, go out the front. The building was so old, I mean that wood was like a starter log.

It was where we were living, so everything we owned was in there, every piece of artwork, every sketchbook from middle school on. I think my mom had even dropped off a box of old trophies and action figures for me that morning. It was a pretty hard thing to swallow.

Is there anything that you learn after going through something like that, as you work through it?

After you lose everything, you have a different opinion of materials in general.

I think art-wise … you know, you look at your old work, and you think it's garbage anyway, so maybe I was even happy it was erased from history. Even the hard drives of photocopies of it were gone, so no one can find it.

Before the fire, I started playing with these larger realism depictions of hands. I played with a number of ideas. At first, they were expressive—they were holding things. I wanted to try to tell the story that way. But I did one where it was just the top of the hand lying flat, not expressive, not holding anything, and it almost felt more powerful. I got more out of it. And so I started pushing them. I got maybe through two or three of them, and that's when the fire happened. They were gone.

But I liked it enough, and I think the fire was enough to be like, you know, I have to redo it.

What were some of the more valuable parts of your time at CIA?

I really loved my instructors when I was there. They taught me a lot. But I think almost more importantly is watching your peers go through it too. I can't imagine being self-taught and having to go through those lessons alone. Being able to see someone else go through a hard time and see how they got out of it and being able to go up to them when you're going through it—I think it's worth a lot.