Knife project shows CIA alumni are a cut above 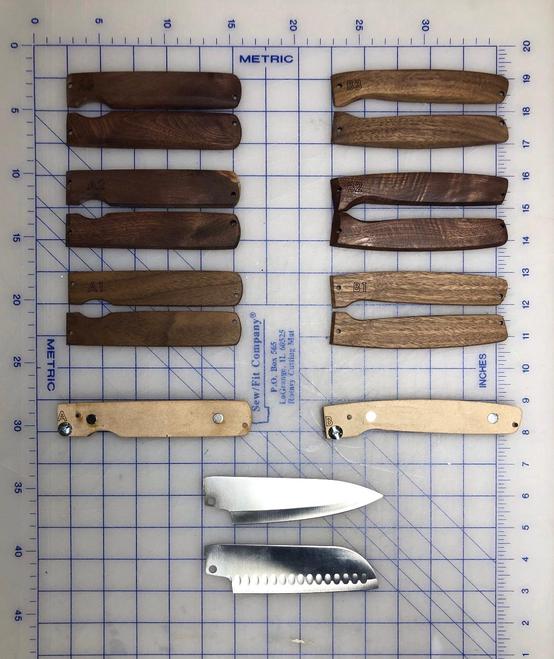 Components of the nCamp food-prep knife on a cutting mat. Photo courtesy of Dan Cuffaro.

One might easily assume that Dan Cuffaro ’91 wouldn’t need help with anything, especially when it comes to industrial design.

The CIA associate professor and chair of the school’s Industrial Design Department has written articles for design journals. He co-authored an industrial design reference book. He’s won industry awards and lectured about his craft in Mexico, the United Kingdom and China.

But even with all that knowledge and experience, when Cuffaro set out to invent a new outdoor cooking knife for nCamp—a company he started that designs cooking equipment for camping—he didn’t go it alone. He was sure to involve CIA community members, some of whom helped him launch nCamp.

Those collaborations recently resulted in a successful Kickstarter campaign in which Cuffaro raised money to market his outdoor cooking knife. He reached his $15,000 goal in the campaign’s first week in early October thanks in large part to a promotional video shot by videographer Jeff Mancinetti ’09. Many of the Kickstarter donations came from alumni, faculty and staff.

Current CIA students were also engaged in the design process. Cuffaro developed his knife in front of a sophomore Industrial Design class he taught earlier this year. It was a chance for students to observe a real-life design process and apply that learning to their own class projects.

“At CIA, we have always tried to maintain a culture of collaboration,” Cuffaro says. “It was like that when I went to school here, and I try to maintain that culture today. Everybody looks out for each other.”

Cutting-edge knife
For years, Cuffaro had used a simple, utilitarian all-purpose outdoor knife to prepare food on camping trips, but it was more suited to whittle wood and cut rope. He searched online and found a knife he thought would perform better but it was even worse. Cuffaro saw an opportunity.

When designing his own food-prep knife in his class earlier this year, Cuffaro showed students how to conduct market research and determine why existing knives didn’t work well when cooking outdoors. In class, he developed ergonomic testing tools featuring different blades and handles he tried in various combinations, with the parts attached with magnets.

In the end, Cuffaro invented a folding knife with a handle that provides enough room for his fingers and a blade with optimal curvature so that he can use the entire blade when cutting. He crafted two versions of the knife.

One of Cuffaro’s former classmates, Scott Richardson ’91, introduced him to Ben Bebenroth, a well-known Cleveland chef and restaurateur, who advised Cuffaro on his products.

“I showed (Bebenroth) the prototypes of the knife, and he couldn’t believe how good they felt and how well they worked,” Cuffaro says. “It was exciting to see someone with his incredible knife skills react that way.”

“I’ve known Dan for a while and our ideas tend to line up,” Mancinetti says. “He knows what I’m capable of, so he trusted me and let me go.”

Making connections
A CIA class, a faculty member and a former classmate inspired Cuffaro to establish nCamp about six years ago.

At the time, Cuffaro assigned students in his junior Industrial Design course to rebrand camping-equipment-maker Coleman. They struggled a bit, so Cuffaro came up with his own project as an example. He designed a compact camping stove meant to enhance the outdoor cooking experience and fit easily in a backpack.

Cuffaro stored prototypes of the stove in his office. Haishan Deng, a CIA Transportation Design instructor at the time, noticed the stoves and referred Cuffaro to a factory that could build them. Cuffaro sought funds for the project through Kickstarter.

“The campaign wasn’t successful, but it showed there was a market for the product,” he says.

Cuffaro’s CIA classmate, Mike Gavorski ’91, then introduced him to John Cunningham, a former Black & Decker executive. The two hit it off, and Cunningham took over the stove’s marketing campaign. Soon, the factory Deng recommended was manufacturing the stove.

Cunningham was impressed how Cuffaro’s knife project, and nCamp itself, became a project in which alumni and the CIA community were involved.

“They want to see each other succeed,” he says. “That’s not always common once you leave college.”