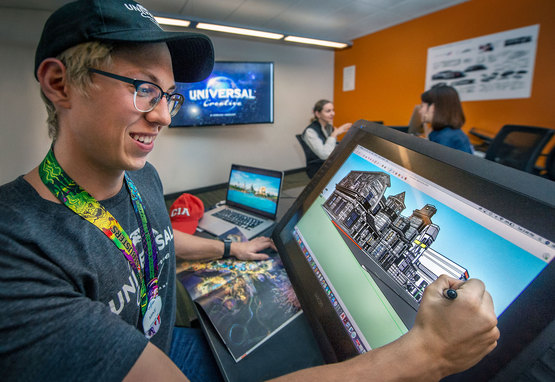 Mike Artwell, a senior majoring in Interior Architecture, works on his theme park-inspired thesis project while sporting Universal Creative attire he brought back from his fall semester internship there. Photo by Robert Muller / Cleveland Institute of Art

Talk to Interior Architecture senior Mike Artwell about his career ambitions and you’ll quickly learn he wants to design the next great theme park attraction—and then keep designing more and more of them.

That seed was planted when he was 5, following his family’s first visit to Disney World. Seventeen years later, he says he was “more than reassured” of his career choice during a fall 2019 internship with Universal Creative in Orlando.

The four-month gig with Universal’s Resort Development Team offered him scores of opportunities—from sketching and ideation to handling intellectual property and learning to work with vendors on fabrication—all of which helped solidify his goals.

Less tangible but equally meaningful moments of validation occurred outside the office, like on Poseidon’s Fury, a walk-through attraction in which guests—in a dramatic, theatrical flash—are transported to the lost city of Atlantis. When he joined the crowds, Artwell stood in the front of the room so he could watch visitors’ reactions.

“That ride is 25 years old, but everybody’s jaws just dropped whenever that moment happened,” he says, noting the attraction’s lack of more modern technology, like 3D media.

“Moments like that—especially today, with how attached we are to devices—when you can get people to genuinely be impressed like that, that’s the reason I want to be in the industry.”

Artwell has positioned himself well to soon enter the industry and provide those “bigger than yourself” experiences, as he calls them.

In 2018, he and three others finished as semifinalists in Disney Imaginations’ annual design competition, and before that, he held a ride-operations internship at Cedar Point in Sandusky, Ohio, which provided him valuable insight into how attractions can be designed both for guests and staff members.

Landing the Universal Creative internship, though, has been his biggest résumé booster. His work pertained primarily to the resort’s hotels, restaurants and stores. One of the projects he worked on recently moved into construction and could be finished in about a year.

“Some of the elements that I proposed, and the renderings and concepts I made, were what they decided to move forward with,” he says. “So, that was really cool.”

Just as important as his real-world experience has been his Cleveland Institute of Art education. Artwell credits Interior Architecture chair Mike Gollini with working with him through the internship process and acknowledges the efforts of the entire department to prepare him for it.

“The faculty I’ve had in Interior Architecture gave me the foundation to build upon. The coursework we’re required to do is a great way to find the things you’re good at, find where you need to improve, and from there, what’s nice is that you can branch off as needed,” he says, noting he’s taking a 3D modeling course in Animation this semester due to what he saw was important during his internship.

“I felt capable when I got to Universal Creative of the work I was doing,” he adds. “If I didn’t have the education, I wouldn’t have been able to do the internship.”

The internship also afforded Artwell the opportunity to network within the relatively small and tight-knit theme park industry community.

“I told myself that 50 percent of what I was supposed to be doing was working on the actual projects and tasks I was given and the other 50 percent was to network, because this is the industry I want to be in,” he says. “Career Services has helped me so much since I’ve been at CIA. From networking to my résumé, all of that was stuff that I initially learned here and then was able to put into practice in the real world. (Career Center director) Heather Golden has done such a great job.”

Artwell’s dream job, he says, would be to design for Universal’s Halloween Horror Nights, which he describes by comparing it to Cedar Point’s Halloween attraction: “It’s HalloWeekends on steroids.”

In his immediate future, however, is his thesis project, for which he’s examining how park guests with disabilities interact with rides and attractions and designing an experience they—and others—can enjoy.

“A lot of times, with today’s innovation and these crazy new attractions, they have such dynamic and wild movement that they alienate a certain segment of the population from being able to experience them,” he says. “I’m looking at how you can flip that a little bit. The way I’m approaching it is that the movement isn’t really the thing that’s intense about it, it’s the subject matter, the stuff that’s happening around you and the world you’re put in. I’m excited about it.”

Gollini praises Artwell’s efforts and work but admits he was at first concerned about his narrow focus on theme park design. He often preaches marketability to his students.

“I was like, ‘Well, that’s nice but it’s a pretty niche market. There are only so many jobs,’” he says. “But he did his projects, he did really good work and he’s a really skilled designer.”

He also commends Artwell’s knowledge base and the way he presents himself. Gollini believes Artwell’s approach, personality and CIA training will serve him well among industry recruiters.

“They look for people who are very diverse, who have the right kind of attitude, who fit in well with the team and how have a unique background. And I think you get that from here because your curriculum is designed to force you to do things other than just interior architecture or industrial design or graphic design or sculpture,” he says. “We’re not ‘cookie-cuttering’ a bunch of kids who’ve learned three pieces of software so they can go sit in an office somewhere and make some people a lot of money, which is what I think a lot of schools do.

“He’s a future creative director or studio head, and it’s going to be very shortly in his future he’ll be there,” Gollini says. “I think he’s learned the right skill sets here (at CIA) and the right mindset as well. Combine that with high energy and good work ethic and the guy is unstoppable.”

Congrats to Illustration major Hannah Spieker for being selected into the Society of Illustrators Student Scholarship Competition 2021! Her "Meeting a Tree" was one of about 300 works selected from more than 8,700 entries submitted by professors of college-level students. @SOI128 https://t.co/5SM544t2Nt

"Entropical Paradise" is "an invigorating dive into the explorations of a rising generation of young artists grappling with a challenging medium," writes @steven_litt in his review for @clevelanddotcom. We agree! The show remains on view through April 23. https://t.co/OF1FfudvKW