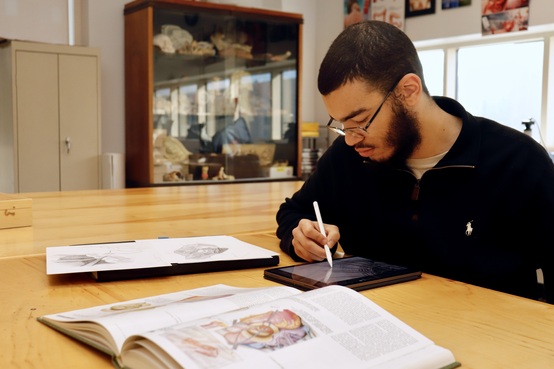 Art is a healing force for both Cullen Williams-Freeman ’23, a Life Sciences Illustration major at Cleveland Institute of Art, and Josie Anderson, a member of the CIA Board of Directors.

A fund that Anderson recently established provided a paid internship for Williams-Freeman, reconnected him to the pleasures of art and helped ground him as he grappled with his artistic identity.

For Anderson, art in the UH Seidman Cancer Center where she received immunotherapy for chronic lymphocytic leukemia was calming, and other art throughout the hospital’s campus was comforting.

In response to the role art played during her treatment and in an effort to support young artists, Anderson established two new programs.

One is the University Hospitals Emerging Artists Fund, which will be awarded annually to two early-career artists. Selected artists will have the opportunity to exhibit their work in a two-person show in the Trudy Wiesenberger Gallery at UH Cleveland Medical Center, and costs associated with professional framing, transportation and exhibition preparation will be covered.

The second program is the University Hospitals Fine Arts Internship Fund, which is open to Northeast Ohio college students who are studying art. Working with UH Art Curator Tom Huck—a 1984 CIA Ceramics graduate—Williams-Freeman this summer became the first intern in this new program.

As the recipient of a College Now scholarship, designed to help high school students prepare for college, Williams-Freeman, then a senior at Cleveland School of the Arts, was assigned Huck as a mentor. When the pandemic finally lifted and the new internship became available, Huck offered the slot to Williams-Freeman.

“My only goal in taking the position was that I felt I needed to do something that was completely different from my major,” Williams-Freeman says.

While he likes his major, the critique process at CIA can be challenging, he says. Working in a practical environment was a relief and a means of self-discovery and validation. In addition, the paid internship supported paying Williams-Freeman’s college expenses.

“While at UH, I was given an opportunity to look at beautiful works of art all day long, and it demonstrated to me so many more opportunities in my career as an illustrator that I can chase,” he says. “In this intern position, I felt inspired to start producing work just for the fun of it again, and that was an amazing feeling.

“The best thing to do to re-establish my relationship with art was to do something I normally would never do,” Williams-Freeman says.

“It’s been a real pleasure to work with him from the mentoring side,” Huck says.

The internship aims “to give a student a multi-faceted, behind-the-scenes look at what we do,” Huck says. He worked with Williams-Freeman on installations at various sites, training him in the mechanics of curating and exhibiting. Huck called his star pupil “an amazing student, a great self-starter, very creative in terms of problem-solving.”

Williams-Freeman enjoyed sharing an office with Huck and a co-worker. “I was treated like a real employee, not a typical intern,” he says. “I clocked into work bright and early and began conducting research, writing about artists, designing labels and much more five days a week for the entirety of the summer. Once the semester started, we agreed to limit my schedule to coming in twice a week.”

Williams-Freeman soon realized how much he valued the inspiration he derived from the job. “I needed to be immersed into the art scene again because I had been backing away from it for some years now, slowly severing my connection to it,” he says.

Both funds Anderson established speak to the healing power of art, she suggested. The art on the walls and in the hallways of UH “helps to contemplate, it’s calming, it’s comforting, it’s simultaneously stimulating and interesting,” Anderson says.

“There’s a huge variety of artwork in the hospital. It is all curated, it’s meant to be comforting and calming, interesting but not challenging,” she says. “People in the hospital don’t need to be provoked or challenged, but inspired.”

Students, by contrast, should be challenged, especially if they feel stuck, as Williams-Freeman did. As a Residential Assistant and Student Leader in CIA’s Uptown Residence Hall, he encourages students to apply for the new internship.

“I always tell students they should get a job doing something that is very different from what they would normally be doing,” Williams-Freeman says. “It is good for your mental health, it will teach you a new skill and it is a position where you will work with great people.”