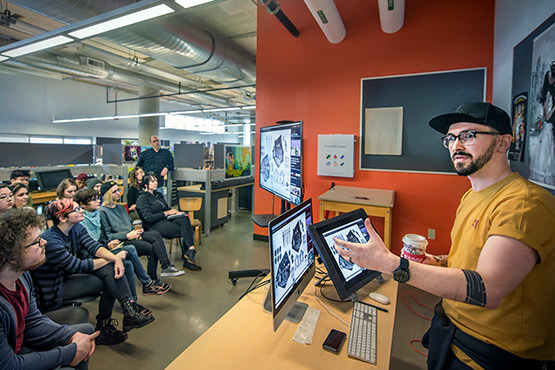 Being an illustrator sometimes means selling your skills — and soul — for a buck, or some used to think. David Kegg has found it to be otherwise.

Kegg’s soul is fed by doing what he loves. After he graduated from CIA in 2010 with an illustration degree, he discovered that “I really enjoyed what I was creating, and I found clients that wanted it. It’s been a really rewarding experience.”

These days, from the Boston home he shares with his wife, Kegg works as a full-time freelancer developing concept art and fantasy illustration, mostly for the game industry. His illustrations have been published in comic books, graphic novels, on packaging and more. But building worlds that play out across video games and other platforms has been near to his heart since before college.

Kegg’s thesis was a concept book called “Prophecy,” a “gritty, sci-fi fantasy setting with giant robots,” he said during a fall semester visit to CIA.

One of his favorite post-college jobs was as part of the development team for “Bierzerkers,” an independently produced video combat game peopled with muscle-bound Vikings and spear-hoisting maidens rendered with a combination of high detail and comic energy. The project drew on a lot of skills he already had, plus art direction and new kinds of collaboration.

Among Kegg’s game concept credits are “League of Legends” by Riot Games; “Sheriff of Nottingham” by Arcane Wonders; and Star Wars: Edge of the Empire” by Fantasy Flight Games.

He praises his experience in CIA’s Illustration Department for showing him the power that can come with being part of a group of serious-minded peers.

“I think the biggest thing for me and for a lot of the other people in my class was that we shared with each other, and we invested in each other,” he says. “There was a camaraderie that was about being willing to put in the long hours…and learning your craft — mind, body and spirit.”

Growing up in small-town Ohio, Kegg was “the art kid.” When he got to CIA, everyone was the art kid. Seeing the work of his peers during freshman year kind made him wonder if he had some catching up to do. But Kegg used that to motivate himself to work hard, he says.

During his first semester in the Illustration Department, he remembers that “a professor who I’d heard lots of stories about creeped up behind me while I was working on a forest scene and drawing a rotted log.

He’s like, ‘What kind of log is that? That’s a terrible log! That’s the worst log I’ve ever seen. You’ve gotta put gnarls and textures and moss, and there should be mushrooms on it.’ He went off on how terrible this log was that I was drawing.”

Kegg laughs, remembering how shaken he was. But he furiously began redrawing the log. “He comes back about 10 minutes later, and he’s like, ‘Now that’s a log. That’s a great log, that’s how you draw a log.’ And he patted me on the back and walked away. There was a whole swirl of emotions.”

Like many of his peers, he wanted to set the standards for his own work by what was being done by rock-star concept artists such as Wes Burt (CIA ’04) and Marko Djurdjevic. “We knew we had to be as good as those guys someday,” he says.

Kegg says his educational foundation also instilled a belief in lifelong learning. He still takes life drawing and portraiture classes, and sometimes accepts commissions for the rewards they offer beyond the financial.

“I might have a job that really didn’t pay me what I wanted, or what I thought I deserved for it, but it might have been something I was really passionate about and wanted to expand on in my portfolio,” he says.

That’s one of the benefits of freelancing, he says. Along with the demands of being his own boss, he has the freedom to follow his own interests.

“Some people have asked how I stay motivated. I love digging into it.

I’m excited to get up and work in my pajamas all day, but investing in these projects,” he says. “I love my career.”