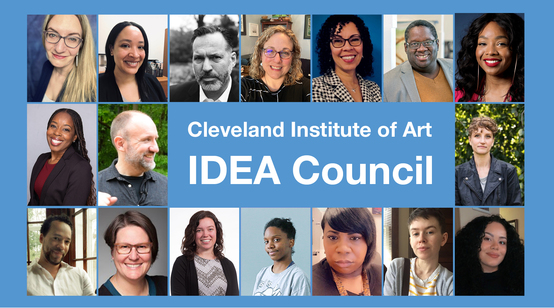 Senior Drawing major Amani Williams has endured racism, misogyny and sexism throughout her life—including her time at the Cleveland Institute of Art. That’s a big reason why she volunteered to join CIA’s Inclusion, Diversity and Equity Awareness Council when it formed in the summer of 2020.

“You pay to go here, you pay to be in this space, and you have all these people telling you that this is a safe space where you can be yourself and make the things you want to make. The last thing you should experience is someone being passive aggressive or to encounter microaggressions from people who are supposed to respect you and honor the fact that you’re different,” she says.

Williams wants to make a difference, especially for students with similar experiences. So do the IDEA Council’s other 15 faculty, staff and student members, who want to address problems they recognize have gone unsolved and under-discussed for too long.

Among those members is Drawing lecturer Amber Kempthorn. “It can be hard to hold a mirror up to yourself, and I’d like to think of the IDEA Council as a mirror for the College. I’m glad we’re engaging in this reflection. I’d be remiss if I didn’t say I wish it had happened sooner, but I’m looking forward.”

Discussions about forming a council were already underway when Vice President of Human Resources + Inclusion Charise Reid joined CIA in January 2020. Those talks picked up in the wake of George Floyd’s murder and the Black Lives Matter protests that followed. The creation that summer of an Instagram account called Black at CIA also spurred action. The anonymous account shared detailed stories from students and alumni who experienced racism at CIA.

“I think that was an awakening for a lot of people,” says Reid, who leads IDEA Council. “We have these students who are having experiences we didn’t know they were having, and they didn’t feel like they had allies or anybody to tell these things or who was going to do anything about these experiences. So, they created an Instagram page.”

Among the IDEA Council’s early priorities is to create a pre-orientation program that helps Black, Latino, Asian, Indigenous and members of other communities become better acquainted with CIA and surrounding neighborhoods to maximize their chances of personal and academic success. “We want them to come in, have a network, and identify allies they can go to when they feel frustrated, have questions or need support,” Reid says.

In addition, better communication within the community is sought. Williams wants to empower faculty to speak up when people are experiencing racism or sexism—moments she knows can be hard to recognize for those who’ve never personally experienced them.

“Microaggressions are very traumatizing, and the way they’re experienced by the victim, it’s easy for that stuff to be ignored or overlooked,” she says. “A lot of teachers don’t want to blindly accuse anyone of anything, and I understand it’s their responsibility to try to bring the class together. But a lot of academic and institutional language ends up hurting students of color because they’re being told, ‘You need to push forward and be respectful to this person who is literally not being respectful to you.’ I think the council can help teachers recognize these issues and find skillful, tactful ways to approach them.”

Kempthorn believes it’s important to create support opportunities for faculty and staff. “Many of us don’t know how to navigate these tough conversations. Many of us aren’t familiar with things like conflict management and resolution, ideas about emotional intelligence, or even where to begin to make change.”

Williams believes the IDEA Council is off to a good start but says “there’s still a lot to be done.” She’s optimistic about the council members—“not just a bunch of old white people talking to themselves”—and their desire to enact change.

“These are people who really are invested in pushing forward a dialogue and making sure students get their voices heard. That’s what students really want,” she says. “It’s not perfect, and it’s not going to be fixed overnight, but we have people who are invested in the betterment of the school. It’s going to take time, but the effort is there.”