News . Feature Stories . 'I love to draw and I love science'

'I love to draw and I love science' 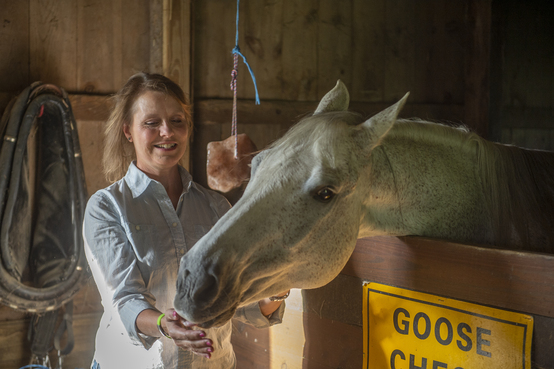 Halasz with her quarter horse

When biomedical illustrator Elizabeth Halasz ’89 was a child, her mother worked at a hospital, and young Beth would spend time there waiting for a ride home. “A lot of times I’d be looking at things on the wall—drawings of hands and cool stuff,” Halasz said. “I was always interested in science and medicine, but I didn't know about this field.”

That changed when she got to West Geauga High School in rural Chesterland, Ohio. Her art teacher, Bill Whitsett, invited in some of his former students who had gone into medical illustration.

“I thought that was the coolest kind of field,” Halasz said. “I got the catalog from [CIA], and I thought this is what I want to do. These classes are all so cool. It was a big catalog. And then I saw the thing about cadaver dissection. And I was like, there's no way I'm doing that. Forget it.”

Halasz was undone by the idea of studying from cadavers, a necessity for understanding anatomy well enough to make accurate medical drawings. She considered a different career but said, “That bugged me because I knew I had the talent to be an artist. I went back to that catalog and said, OK, I'm going to do this.”

At CIA, she took medically based courses at Case Western Reserve University, faced up to the cadaver research, observed surgeries, and took some of the same tests as medical students. After she earned her BFA, she worked as an illustrator in and outside the biomed field, including at American Greetings (“they wouldn’t let me draw hearts”), the Cleveland Museum of Natural History, and the Cleveland Clinic.

Halasz also became one of the first students to earn a master’s degree at CIA. Her thesis project was to develop the first animation that demonstrated how Lucy, the early hominin whose replica skeleton resides at the natural history museum, might have walked. David Deming, then the president of CIA, asked for Halasz’s Lucy video to be projected as she walked at commencement.

These days, she’s a full-time assistant professor in CIA’s Biomedical Art Department, and does science-based illustration on a freelance basis. Asked what her dream project would be, Halasz said she’s relearning what it means to draw for herself.

“When you're a medical illustrator, you're very defined, very detailed,” she said. "The client tells you what, when, how, and where it's going to go. I think you un-train because you can't draw unless somebody tells you what.”

But when she has the time and freedom, she feels pulled toward drawing plants and flowers. Halasz also works on her farm (she just bought a tractor), tends her two horses, and volunteers on horseback as a deputy in the mounted unit of the Geauga County Sheriff’s Office. She loves riding, and she’s glad she can help be a bridge between law enforcement and the community.

“I think everyone should do a little bit of volunteering, helping someone, somewhere, somehow, whatever their talent is,” she says. “My talent may not be providing medical assistance, but I have the ability to take a horse out and learn how to handle people.”