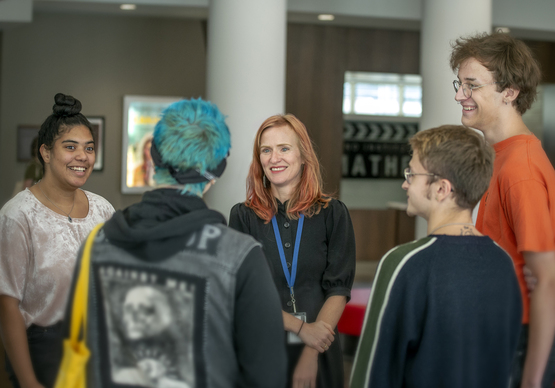 Kathryn Heidemann talks to students after her arrival at CIA in 2019.

Next year will mark more than the Cleveland Institute of Art’s 140th anniversary. It will also represent a new chapter at CIA—one with Kathryn Heidemann serving as its new president and CEO. Heidemann’s future appointment was confirmed by the Board of Directors in August and she will begin her new role on July 1, 2022.

“CIA is one of the most respected colleges of art and design in the world, and it’s a distinct honor to be chosen as its next leader,” says Heidemann, who will be CIA’s first female president in more than 100 years. “I’ll be a staunch advocate for our students, faculty and staff, and I’ll work tirelessly to ensure our future success and creative growth.”

Heidemann will succeed Grafton Nunes, who announced his retirement this summer. When Nunes steps down on June 30, 2022, he’ll have served 12 years as leader of the College. Until then, Heidemann and Nunes will work side by side to complete a seamless transition in leadership.

“I believe Kathryn Heidemann is the right person in the right position at the right time,” Nunes says. “There are new challenges and emerging opportunities in higher education, and it is Kathryn’s generation of faculty and staff that will reinvent higher education for a post-pandemic America of explosive aesthetic expectations, expansive design needs and impressive diversity. She sees these transitions and is singularly prepared to address them. I am excited for CIA’s future under Kathryn’s leadership.”

Heidemann joined CIA as vice president of academic affairs and dean of faculty in 2019. In her role as the College’s chief academic officer, she has been responsible for program and curricular development and delivery, academic operations and strategy, student affairs, and accreditation and assessment. She played a key role in devising CIA’s most recent strategic plan, guided the College’s successful reaccreditation process and led its COVID-19 academic planning.

“The Board has been impressed in every conceivable way with her energy, her devotion to the College, and her understanding of local artistic, political and economic environments,” says Cynthia Prior Gascoigne, CIA Board chair. “In addition, we have been pleased to see the same types of skills in her that we were lucky enough to have in Grafton: vision, imagination, sound business sense, an ability to connect with students and employees, and the ability to make a case for financial support among our friends and donors.”

Prior to joining CIA, Heidemann served as assistant dean at Carnegie Mellon University’s College of Fine Arts and the Heinz College of Information Systems and Public Policy. Her responsibilities also included leading the university’s graduate programs in arts management and entertainment industry management, placing her work at the intersection of arts, technology and public policy.

She also has more than two decades of arts and nonprofit management experience, holding leadership roles in artistic operations, curatorial programming, marketing, fundraising, and educational and community engagement for a variety of institutions. As a champion for creative placemaking, she served as a mayor-appointed art commissioner for the City of Pittsburgh.

Through her leadership roles, she has seen firsthand the positive impact art and design can have on communities, from reviving economic fortunes to activating underused spaces. As president of CIA, she will seek to boost its contributions to Cleveland’s creative economy and leverage the arts’ role in fostering innovation.

“Art and design play a fundamental role in building civic participation, creating a sense of place and provoking positive disruption of industry—all of which improve our communities and move cities forward,” she says. “As a primary driver of the arts in Cleveland, CIA’s involvement is crucial. I look forward to building on our past successes and identifying new ways for our artists—students, alumni, faculty and staff—to make a difference.”