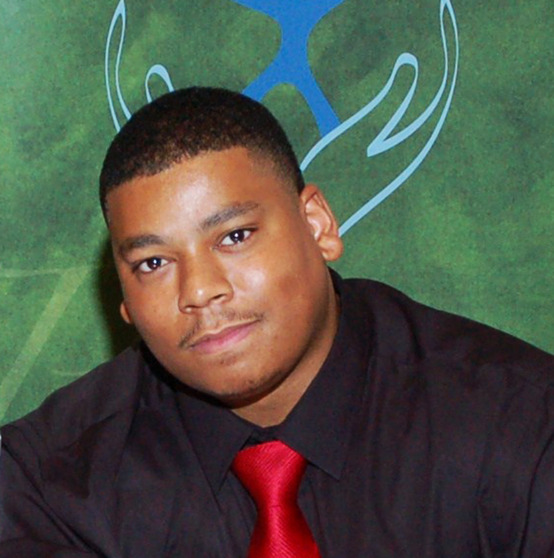 CIA grad Martinez E-B ’12 has illustrated another in a series of engaging and educational comic books, this issue meant to teach children about gun safety and promote toy gun buy-back programs.

Brink City Special Edition: Kids Lives Matter is the sixth issue of the Brink City – Green in the Ghetto comic book series published by the Rid-All Green Partnership. According to the group’s mission statement, the series “was created to communicate the importance of the green movement and environmental justice to non-traditional and hard to reach audiences, with a particular emphasis on urban youth.” Previous issues addressed water conservation, healthy eating, recycling, and urban gardening.

The latest issue will be distributed at the partnership’s next toy gun buy-back program on June 27 at the Rid-All Farm, 8129 Otter Road in Cleveland’s Kinsman neighborhood.

Rid-All Green Partnership co-founder Damien Forshe will be proud to distribute copies in exchange for toy guns. “The artwork is awesome and the message is a home run. It’s an important message for kids,” he said.

E-B (above) created the illustrations while wrapping up his final semester of graduate school at Columbia College Chicago. He received a master’s degree in Interdisciplinary Art on May 16.

After graduation, he shared a few thoughts about his involvement with the Rid-All Green Partnership:

What motivated you to get involved and stay involved with this project?

I co-created Brink City issue #1 with Rid-All Green Partnership during my first year as a Painting major (sophomore year). However, our relationship started far before then. At the age of 18, I was introduced to the family who would eventually be known for their work as urban green stewards. I was fortunate enough to be mentored by a couple key gentlemen from this group of men as I was growing up in the city. Their mentorship played a very important role in making the man I am now.

I believe I was 22 years old when I started working with Rid-All as an exterminator. We primarily did City Housing developments. Some of the living conditions I witnessed bothered me greatly. I suggested that we make a small comic book, which I would illustrate and compose, that introduced us to the kids of the city housing development while offering them tips on cleanliness and other such things. We never got around to it, but Damien Forshe (the founder of Rid-All) never forgot about it.

Eventually I put the insect bait gun down to pursue four years at CIA and shoot for the odd chance of living life as an artist. During second year, Damien called me up for a meeting. He reminded me of the comic we wanted to make for the housing projects and then offered me a shot at making something at a much bigger scale. I knew these men. I knew how passionate they were about making positive change in the community. I knew what they invested in me during my time with them. Our impulse for constructive change collided in the most playful and poetic way. And with creative rights and a chance to expand the subject of my work, I started working on the Brink City comic book series. And until this very day I am constantly motivated by their work and the response from children when they receive our messages in this format.

What do you hope children will get out of this and previous issues of the series?

My son grew up with the Brink City books and its hero character RIDALL. He watched his daddy draw almost every line and letter each page. He knows its fiction. However, when he went to one of the Brink City puppet shows and discovered he was a ‘Green Agent’ it empowered him. This fictional thing we created lived in him as he walked around the house talking about putting away trash properly, recycling and not wasting water. It was adorable and very real. I hope our project can work in all children this way. The Brink City books are set up in a way that has messages for people of all ages. The comic book medium offers me the chance to say multiple things at once. My biggest wish is that all those positive and challenging messages will play themselves out in our readers. I want the children who read to become heroes in their own right and then challenge their teachers, parents and the world around them to step up and live heroic too, in some form or fashion.

How challenging is it to communicate visually in a way that might appeal to children?

Creating a look that might appeal children is something that I don’t know if I have a grasp on yet. I know magnificent illustrators who have a sweet style or can switch over to one that they know would be like visual candy for children and the children book scene. I am unfortunately not that illustrator. I honestly don’t consider myself an illustrator. I am an artist who makes educational exciting children’s books as part of his practice. In some way I think that frees me up to just make. Each time I draw or put my sable brush on Bristol board I feel like I am still learning how to do this whole drawing thing. I hold myself to one major rule when illustrating the Brink City books- keep the line work lively and never choose balanced and clean over unbalanced and human. So far it has served me pretty well. It may not be the look for the big comic distribution companies, but I am proud every time a kid responds to it.

Requiring the COVID booster shot is one way we are ensuring our students, faculty, and staff are protected against COVID-19 and the omicron variant. Read the full article below! @SpectrumNews1OH #ClevelandInstituteofArt #SafetyFirst https://t.co/u8WvkA1H2x