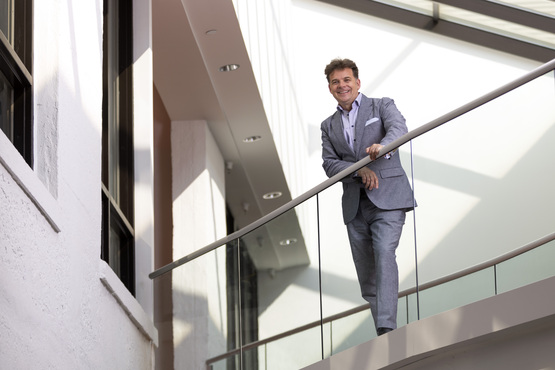 This summer, as Cleveland Institute of Art faculty and staff are getting to know Greg Watts, the College’s new Vice President of Academic Affairs and Dean of Faculty, he’s made a point of saying he wants to get to know a certain special constituency: CIA alumni.

Watts is an accomplished photographer, experienced educator and skilled administrator who most recently was at the College of Visual Arts and Design at the University of North Texas, where he served as dean for six years and taught courses in art and business. Before starting at CIA on July 5, he was acutely aware of CIA’s legacy. He wants to learn even more.

“I think the alumni are our best champions. They’re a demonstrated outcome of what we do. Having them share their stories and experiences, giving us feedback and telling us how CIA is viewed in the real world is always a valuable listening moment for any of us,” he says. “If there’s any request we can make of them, it’s don’t be shy about letting us know where you are. Follow up with us and share your personal story. Those personal stories are really meaningful.”

As CIA’s chief academic officer, Watts will be responsible for ensuring the delivery of the College’s rigorous curriculum to students. He will lead about 100 ranked and adjunct faculty members and oversee CIA’s foundational studies, liberal arts, 13 art and design majors, the Jessica R. Gund Memorial Library, Academic Affairs, Student Affairs, the Registrar and continuing education programs.

Watts will also oversee the new Jane B. Nord Center for Teaching + Learning, which will support the pedagogical and educational development of faculty. President + CEO Kathryn Heidemann led the effort to create the center when she served as CIA’s chief academic officer, and in stepping into his role, Watts is looking forward to what the center’s director, Kari Weaver PhD, will bring to the College.

“It was an incredibly astute observation on Kathryn’s part to see this as important, to seize it and to make it real,” he says. “My hope is that Kari will be a real partner with the faculty, that she’ll be able to provide them with resources to constantly reinvigorate, re-enliven and rethink the way in which they share their knowledge with our students.”

On a personal note, Watts is a cinephile whose interests range from film noir such as Orson Welles’ Touch of Evil to the contemporary quirkiness of Wes Anderson films. That CIA is home to the Cinematheque is an added bonus for Watts, whose interest was piqued by recent Cinematheque screenings of David Lynch’s neo-noir mystery Lost Highway and a newly restored presentation of Rude Boy, a documentary about influential punk rockers The Clash.

Watts is a native of Cambridge, England, and he and his wife Kimberly purchased a home in Cleveland Heights. As for his new work home, CIA, he says he’s been impressed by how much people at the College want to help others succeed and grateful for a welcome that’s been “really generous and quite wonderful.”

“The welcome has been phenomenal,” he says. “I just can’t wait to see how buzzing this place is when faculty and students are back. That’s really when I’ll start to feel the true vibe of this place.”

We are excited to formally welcome President Kathryn J. Heidemann! ð ð§¡ On Friday, CIA celebrated her historic presidency, which included her formal installation as our first female president in more than 100 years! #ClevelandInstituteOfArt https://t.co/KOWt9rtRza

Celebrate the historic occasion of Kathryn J. Heidemann's presidency with us virtually from 12-12:45 pm! ð« The ceremony will culminate with the formal installation of Heidemann as CIA's first female president in more than 100 years Celebrate with us: https://t.co/cp8uCbu8ca https://t.co/iKDDlJcGzG