A career in communications for Kimberly Chapman, 60, gave way to delivering poignant and topical messages through her artwork. 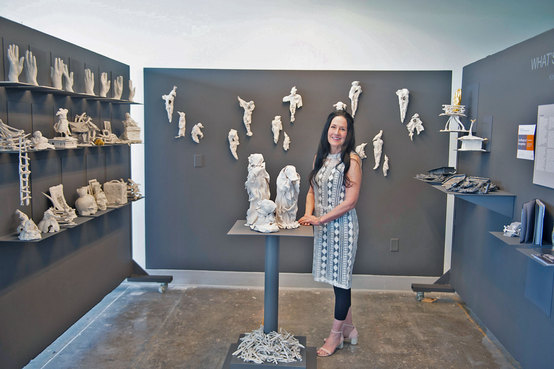 Before attending CIA, Chapman ’17 worked for 25 years in marketing at organizations that included Ursuline College, Matrix Essentials, Little Tikes and Cuyahoga Community College. Her marketing skills included conceptualizing, managing and executing her plans. Today the Moreland Hills resident does the same with her art.

How did you end up at CIA?
My father was a graduate of the school, thanks to the GI Bill. His professional focus was commercial art, but he had the most fun painting, sculpting and woodworking—simply creating. He had a huge amount of natural, raw talent. He told me he owed his success to his CIA education and that it gave him the building blocks to create. He was so gifted that I never had the courage to pursue art—there was a distinct line between my childish attempts and his natural ability. I chose a marketing career instead.

As I grew older, I stumbled upon photography. It satisfied my yearning to make memory permanent. Then I realized that porcelain would last longer than pictures. I fell instantly in love with its translucency and buttery consistency. So after 25 years in the marketing arena, I decided it was time for a career change, and if understanding the building blocks of art was critical to becoming an artist, then I would enroll in CIA.

Did the age difference between you and other students make you uncomfortable?
Not for a minute. When I started, I had already raised kids that were older than most of my fellow students and I was soon to be a grandmother. Surrounded by such youth, talent and energy, there were days where I actually forgot I wasn’t their age—imagine that! They were always respectful and kind. I’m still friends with many of them.

What’s one piece of advice you’d give to someone considering a similar move?
Just do it! It will expand your horizons in unexpected ways and will make you a stronger artist. As older adults, we bring a lifetime of experience to the classroom, and most of us have already acquired a solid work ethic. We realize it is a privilege and an honor to attend a fine arts college, we know how to play well with others and how to get a good night’s sleep. You’ll gain the skills you need to find your artistic voice and become entangled in a network of fabulous artists, both local and national.

What’s one interesting thing people don’t know about you?
I have zero tolerance for watching horror movies or anything to do with murder or crimes against women and children. Years ago, my neighbor convinced me that The Silence of the Lambs was such a great movie and really not that scary. I watched it late one night at home and I’m still recovering.