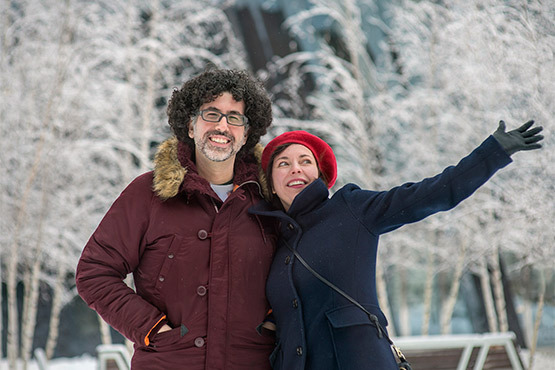 Hrag Vartanian, editor in chief of the online art and culture site Hyperallergic, visited Cleveland and spoke to an audience at the Cleveland Institute of Art on Feb. 15. A longtime writer and art historian, Vartanian and his husband, Veken Gueyikian, launched Hyperallergic in 2009. The site now has 10 full-time employees, a stable of 100 freelancers, and has paid its writers from Day One — hardly universal practice in the digital publishing era.

Hyperallergic has covered everything from street artist Banksy’s latest projects to the 2011 Egyptian uprising, and gathered click-happy fans with its annual 20 Most Powerless People in the Art World list.

Genial and fast-talking, with a head full of salt-and-pepper curls, Vartanian spoke to CIA Drawing students and also offered a few thoughts on art and writing during his visit.

How did Hyperallergic get started?

HV: We wanted to create something that didn’t exist in the world and was accessible to people that loved art but didn’t necessarily have an art education, but also that engaged with the world, understanding how art is changing and being transformed. We weren’t finding that. We found things that were specialized for an art audience, and then we found things that were much more generalized for a generic sort of passing interest, which is often what newspaper writing will be. And that’s fine. But we wanted something that could go in depth into a topic, then also be playful, and be a little more experimental. As well as the fact that we wanted to create a publication that actually paid people for their work online, which at the time was really scarce, particularly in the art field.

We agreed to pay people from day one, so we were paying people out of our savings. I feel like there’s a huge motivator: OK, either we’re going to keep losing money or we’re going to have to find a way to make money in order to sustain this.

After a year when we got traction, we realized we were going to have to have a system. And my husband, who’s our publisher, has a background in interactive marketing. So this was actually his passion. He was always so surprised. I would take him to art events, and he would look around and say, “How are people doing all this for free?” He comes from a business mindset. He was trying to find out how the system worked, and how we could monetize and make it sustainable.

Did you begin with the premise that everyone is a potentially art-interested reader?

We saw that contemporary art and art in general was getting a mass interest in the way music maybe did in the ’60s and ’70s. Especially about 10 years ago, everything from like graffiti to street art was everywhere, and it still is in cities. It started to bring in new people who wanted to know more, but felt somehow alienated from what was there already. That was just one thing, and then the Internet started emerging, where people all of a sudden had access to images, and were seeing things but not necessarily understanding what they were seeing. So, we often see our role as interpreting and helping people feel comfortable with these things, and talking about them in a way that they don’t feel they need a degree to understand what is going on.

What do you know about the people who are discovering Hyperallergic?

We haven’t done readers statistics for two years, and our readership has grown a lot since then, but they tend to be pretty well educated. There’s a high percentage of people with university degrees, which I think is natural, because we’re having different kinds of conversations. But the other types of readers are like people who work in graphic design, who find that they’re part of the conversation, and are not being condescended to. And then there are user-interface designers at computer companies, who feel like, OK, these guys are having conversations that are relevant to what I’m doing.

We’re multiculturalists. We can have parallel conversations. So, you want to have this conversation, great. I may not be interested in it, but you should be having that conversation. And the conversations I’m having might not be fully relevant to you, but we’re all going to be richer if we can maintain all these conversations going on.

The other thing is I do feel like there’s a universal language we’re engaged in. I shy away from saying that things are universal, but I think that there are things that culturally can be communicated through art that we need. If you take an art object from a culture you’re not familiar with, and a language you do not speak, it can still communicate something. That’s probably the best part of art.

What’s the worst thing about the art world today?

The classicism. I think it’s so embedded in our culture that we actually don’t often see it. We like to overlook or not see aspects of the art context that are real. And that includes something as simple as who keeps the white box clean? Who ships the art and doesn’t have health care? I’m really eager about making sure that we can still appreciate something, but know the context.