A new exhibition invites viewers to rethink notions of digitally made work. 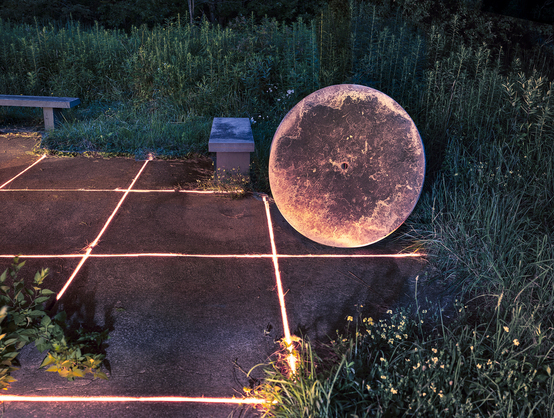 Matthew Hollern has long been a close observer of the evolving role of technology in the creation of art. He puts that abiding interest to use in a new exhibition titled Untouched: The Digital Paradox, on view from August 30 through October 13 at Heights Arts in Cleveland Heights.

“One of the first reactions people tend to have when told that a work of art was produced digitally or otherwise using technology is to express disappointment,” says Hollern, professor and chair of Jewelry + Metals at the Cleveland Institute of Art. “But it’s not like all of a sudden you don’t have to have talent or ideas. You think it’s easy? You should try it!”

“I think the word skill is helpful,” Hollern says. “Skill can be recognizable through manual dexterity, in the same way that athletic skill can be demonstrated through physical coordination. But not all success in sport is physical. There’s an idiom about golf, that golf is 90 percent mental. The other 10 percent is mental. These athletes have all the skill in the world, but that doesn’t guarantee they will win.

“I think skill and craftsmanship and intent will never be missing,” Hollern says. “Bad craftsmanship is just as available in digital technology as it is in the woodshop. So the title of the exhibition—Untouched—is intentionally a little bit misleading, intended to get you thinking about these issues.”

The premise of the exhibition is to gather artists who use technology in obvious and less obvious ways to produce work that stimulates, challenges, and engages viewers.

“A few organizational principles structure it,” says Hollern. “One scenario is where the digital activity and its history are apparent—the object reveals how it was made. In another case, the technology is invisible. For somebody like Barry Underwood, he actually creates a body of work that appears to be digital. You would think that the effects are Photoshop or some kind of digital trickery, but the only digital part of his work is just the beautiful prints. That’s why he’s an interesting person to put in this mix, because it challenges assumptions—and then there’s also a beautiful technology being used to make those exquisite prints. I think that part is something people should appreciate.”

The ideas can get fairly nuanced.

“So there’s the apparent, there’s the invisible, then there’s the hybrid, where people are using new technology along with what might be analog or established,” he explains. “Then there are variations on what we can actually see, what is manifest. One is the idea of the tangible, an actual object. Another is the virtual—it is visible, but it doesn’t exist in real space, like an image on a monitor, he said. “And there’s something in between like images that are printed, or projection.

"And finally, there’s something where there’s evidence of something that’s is no longer there. Margarita and Markus are making these cuffs that go on your arm, then they take them off and your arm looks like snakeskin because of the pattern that has been pressed into it," Hollern says. "The object is gone but the evidence is there. The evidence is the actual work, not the object itself.”

The collaboration between Hollern and Cuban artist Valdes goes back to a Cleveland Foundation Creative Fusion project some years ago. “The Creative Fusion program, as I understand it,” says Hollern, “was originally the brainchild of Kathleen Cerveny before she retired from the Cleveland Foundation (she is now on the board of Heights Arts). The idea is to bring in people who are not the usual subjects, who come from locations in the world that we are less likely to be connected to, and to find out what happens when these people get together.”

“So, my thought in that context was that I represent the idea of innovation through technology, and Yasniel represents the idea of innovation through scarcity—so the idea was to see what would happen if those two artists collaborated. He really demonstrated to us how he works in his studio in Havana, and I showed him 3D modeling. He has a show coming up that may well be the first show in Cuba that involves 3D printing technology, which for me is super thrilling.”

The potential to bring together disparate artists and audiences is the most compelling aspect of the exhibition for Hollern.

“One thing I’m excited about is the diversity of artists in the show and all the different audiences and groups of friends that will come together.”

“There will be artwork and people and ideas that are new to the gallery. It will also allow us to contribute to advancement of the Creative Fusion program," he added. "Maybe most of all, it will be the first time Heights Arts has presented a show like this—people will say, ‘oh I’d heard about that, but I had no idea what it meant.’ And also, with all the windows on the street, there’s the potential to reach a lot of people.”

Celebrate the Cinemathequeâs 34th year at CIA during a live-stream event featuring Buster Keatonâs âThree Agesâ with musical accompaniment by Ben Model at 7:30 tonight (Aug. 8)! Read more at @clevelanddotcom and get tickets via @clecinemathequeâs website. https://t.co/QvC056fU5g

Visit https://t.co/LVGUfnMs8R to view our updated Smart Return to School plan. Also, students, be sure to check your email for info about CIAâs COVID testing program. https://t.co/ZGb7gbi6eH

You name it, weâre cleaning it. To prepare for fall semester, our amazing housekeeping staff has been sanitizing, scrubbing and sweeping studio spaces, residence halls, offices and more. https://t.co/uLNXcU9Pck