Throughout his career, the Industrial Design alum has relied on creative problem solving skills that were fine-tuned at CIA 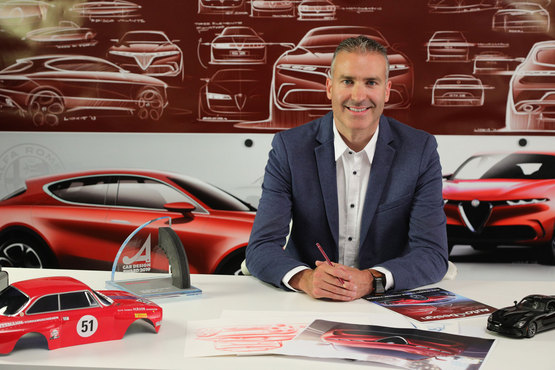 Talk to Scott Krugger about what makes good auto design and you will quickly understand that success doesn’t begin and end with a superstar whipping out hot sketches—though those are important, too.

“First and foremost, you have to be a problem solver. As a designer, you must think with an open mind, and find creative solutions to real everyday problems,” said Krugger ’01. “You need to put the customer’s needs first—it’s not just about the individual artwork.”

Krugger learned those values as an Industrial Design student at the Cleveland Institute of Art. They’ve stayed with him as he shaped his career across brands and responsibilities at Fiat Chrysler Automobiles.

At the start of this year, Krugger was appointed Director, Dodge, Chrysler, Passenger Car and Utility Vehicles. The promotion brought him back to Detroit from Turin, Italy, where for four years he had been Head of Design at Alfa Romeo. Among his successes there: In 2019, Auto & Design magazine gave the Alfa Romeo Tonale its highest award in the concept division. “That’s at the top of achievements for me being a part of the Alfa Romeo team,” Krugger said.

Krugger oversaw design of all Alfa Romeo vehicles, from exteriors to interiors, from colors to materials to the user experience. It’s a big post at a 110-year-old company known for European high style.

The Alfa Romeo brand is embodied, Krugger said, by “an extreme connection to human forms and organic sculpture. When discussing our design language, we believe that there’s a perfection to the imperfection. This characteristic is only achievable through hand sketching and hand sculpting, which is at the heart of our design process. That doesn’t mean that we exclude the latest technologies available to us, we just don’t allow them to define our designs.”

His path to Italy started in Erie, Pennsylvania, where, in a high school art class, he stumbled on automotive design in a college brochure. Suddenly he realized that he could make a living combining his passion for creating artwork with his love affair with the automobile.

He toured several schools before visiting CIA. “I remember going to CIA and thinking, OK, this is where I need to be. I felt like I could live the college experience while being surrounded by a diverse culture of art, music and academics. It just felt right. I’m very thankful I went there,” he said.

After graduation, DaimlerChrysler hired him into the small-car studio. Over the years, he worked on vehicles including the PT Cruiser, Dodge Challenger and Charger, RAM Truck, SRT Viper, Chrysler Pacifica, and various concept vehicles.

In 2013, the company invited him to participate in its Executive MBA program through Michigan State University, an opportunity extended to only a handful of leaders throughout the company each year. At the time, Krugger said, it was rare for designers to pursue a business degree, and, he admitted, “I’ll be honest—I was very nervous.”

Encouraged by his wife Margo, a graduate of Case Western Reserve University, he added graduate school alongside his full-time career. The schedule was demanding. “I’d come home from work, eat dinner, say hello to my wife and daughter, then go upstairs and hit the books,” he said. “It was rigorous, but it became rather addictive. It brought me back to the late nights working at CIA, and as a result the sense of accomplishment was very similar.”

The hard work proved worthwhile. The program put him together with students from a wide range of disciplines and from many other companies and industries, which deepened his perspective on the overall business.

“It gave me a better understanding of the other (professional) groups that I work with,” Krugger said. “Am I going to be responsible for running the business-case numbers? No, but I understand how we arrive there and how Design can play a more active role toward helping us achieve our goals.

It was eye-opening to gain this perspective toward creating and developing our products.”

Not long after he earned his new degree, Krugger was invited to design at Alfa Romeo in Turin. While he and his family were there, they traveled extensively. “You quickly realize that this world is much smaller than you think it is,” he said. “Every country and environment offers a unique perspective that has broadened my thought process in ways that I never thought possible.”

The move also has enhanced his understanding of the automotive market.

“The landscape is clearly different, with a higher concentration of people living in the cities, tighter spaces, smaller roads, and a higher price for fuel,” Krugger said. “There’s a need for something smaller and more efficient. Despite these practical needs, there’s an unbelievable passion for the automobile in Italy, and throughout Europe, that is second to none.”

Now back in Detroit, he brings that global perspective to the new post at FCA North America.

“The future of our industry relies on a more global outlook when designing and developing our products,” Krugger said. “It’s imperative to understand the tastes of each region from day one, and to apply this thought process into our workflow every step of the way.”

During nearly two decades in the auto industry, Krugger has watched trends rise and fall, and met the challenges of creating beautiful designs within parameters set by real-world business goals. His advice to the next generation of car designers?

“Observe and absorb everything around you,” he said. “Challenge yourself to the point of discomfort. I guarantee that this is the space in which you will experience the most personal growth.”

After chasing his pro racing dream, Carl Zipfel pursued his creative passions at CIA, "where I saw students drawing futuristic cars and motorcycles, and I knew it was for me." Read up on this Industrial Design gradâs @GMC career in this @DirtRiderMag Q&A. https://t.co/IMIUjQjhcO