For Animation senior Charlie Rose, a chance to work with Power Rangers for Hasbro is a welcome opportunity 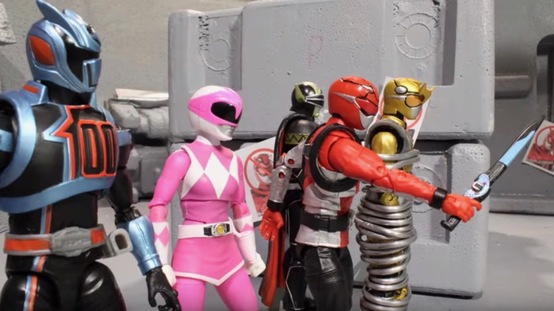 Spend any amount of time on Charlie Rose’s YouTube page and you’ll quickly learn he’s no stranger to Power Rangers. The senior Animation major has used the popular line of action figures on multiple occasions for his stop-motion animation videos.

In fact, it was those videos that caught the eye of executives at Hasbro, the toy company with the license for making Power Rangers products. Hasbro commissioned Rose to produce a video to showcase Wave 2 of its newest collection of Power Rangers figures, which hit the market before the recent holiday season.

Rose—whose work might be familiar from the Cleveland Institute of Art’s 2018 holiday greeting—recently discussed the nature of the project, what he learned along the way and how his education at CIA came into play.

What exactly was the project Hasbro asked you to do?
I was commissioned to produce a two- to five-minute stop-motion action/comedy video in my own style, similar to the films already available on my YouTube channel, MootroidXProductions. Specifically, they wanted me to use Wave 2 of the Power Rangers Lightning Collection action figure line. I had already done some animation with a figure from Wave 1, so Hasbro knew I was willing and able. The video turned out to be almost exactly five minutes long, and I was able to use all four of the Wave 2 figures, as well as another two from Wave 1 that I already owned.

This was a paid job meant to be part of their influencer campaign, which I believe involved getting as many popular online creators as possible to post content about the Lightning Collection line. As far as I know, most of the creators who participated were reviewers and the like, with only a handful of stop-motion animators, so it took a little time to explain how my creative process differs from others.

How did you and Hasbro come together for this project?
They actually had to contact me twice—once through the Messenger function on my channel’s Facebook page and once through email, which I have available online. I didn’t see the Facebook message until after I’d responded to the email, but it was exciting to realize that they liked my work enough to keep trying after I’d, you know, accidentally ignored them. For the duration of the project, I was in contact with a go-between who worked out all the information and updates between me and Hasbro’s marketing team.

How did your education at CIA help you in this project?
I’ve learned a lot about the principles of animation during my time here. The Intro to Animation and Acting & Directing courses, in particular, did a lot for me. I’ve also taken every opportunity to complete assignments using stop-motion for extra practice. During my design courses in my freshman year, I also learned a lot about fabrication, which helped with building the set. The set itself is actually built on top of a platform I used for my final Acting & Directing assignment and was never taken down. Basically, all of my films now are filled with little remnants and leftovers from past projects, most of which were class assignments.

What did you learn about working on a professional level by taking on this project? How did it help you prepare for the future?
The biggest thing I learned was not to take on two big projects at once. I was working on this simultaneously with my thesis film, so toward the end, things got intense. The entire first week of winter break was a non-stop marathon of animation and editing. I didn’t even sleep for the last two nights before the deadline. Now that I’ve got this experience, though, I know basically what professional freelance work will be like, so I have a better idea of my own limits and capabilities. I also finally figured out how to send an official invoice, so that’s a plus.

Professional stuff aside, this just seems like a cool gig. What did you personally enjoy or find interesting about it?
I’m a huge fan of the whole Tokusatsu genre, which basically just means people in suits fighting rubber monsters. I grew up on this kind of thing, and about half of my videos lately are based on Power Rangers or other similar series, so I had no trouble at all about taking on a Power Rangers project. The simple fact that a Hasbro representative reached out to me, personally, and offered me a paid Power Rangers gig was one of the coolest things that’s happened to me. And of course, I got a bunch of free action figures out of the deal!

Where can people see your work?
Right here!