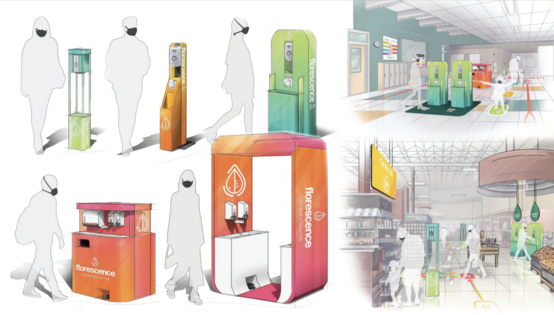 Renderings of sanitation stations, way-finding signage and educational infographics implemented in stores and schools were part of a CIA student-designed proposal. The Cleveland Foundation-supported project aimed to address PPE needs during the pandemic.

One of the tenets of a Cleveland Institute of Art education is devising creative solutions to professional problems, big and small. That was put to the test last year when the CIA community—and every other college, business and organization—faced a particularly big problem: a global pandemic.

What made it especially challenging was that COVID-19 affected nearly every aspect of doing business. Buildings were shuttered and supply chains disrupted. Among the many examples that made headlines last summer was the shortage of personal protective equipment, or PPE, used by medical professionals on the front line of battling the virus.

Of course, CIA and its students were also affected. Some challenges were easy to see. Campus was closed and learning went virtual. Others were less obvious. Namely, many of the students who intended to tap into a reliable job market for post-grad work or summer internships were left empty-handed because of across-the-board hiring freezes.

What do you have when you combine that dearth of student and graduate work opportunities with the pressing need to address PPE shortages? A situation ripe for creative solutions.

To form a strategy, CIA administration and faculty met with leaders from the Cleveland Foundation, who already were working with area manufacturers and health care institutions to discuss ramping up local PPE production.

“We’ve had a long and really powerful partnership with CIA, and multiple projects over the years have focused on some of the most pressing needs in Cleveland,” says Lillian Kuri, Cleveland Foundation executive vice president and chief operating officer. “It’s a testament to the school and to students’ interest in solving real-world problems in their community.”

That fruitful history of collaboration meant that joining forces to address student needs and PPE demands came about naturally. “The idea emerged to have students—in real time—help in the situation we’re in,” Kuri says.

Dan Cuffaro ’91, chair of CIA’s Industrial Design Department, led the College’s efforts. What resulted was a five-week project that sought to address three areas: the needs of health care workers; the needs of other front-line workers, such as teachers and grocery store workers; and needs surrounding visual and environmental changes, such as reconfigured workspaces.

The project involved 18 students majoring in Industrial Design, Graphic Design or Interior Architecture. While developing concepts that could be produced, Cuffaro prompted those students to take a blue-sky approach that might help move the needle on PPE.

“Let’s set aside real-world limitations so that we can think really broadly and explore options that might inspire local manufacturers to say, ‘Hey, we can reinvent this category,’” he says was his charge to the participants. “Students are particularly good at that. That’s why so many young designers get hired out of school.”

For Cuffaro, including real-world experience in this project was essential. Internships, for example, contextualize what students learn in the classroom, help them mature as designers and expand their professional networks. Gaps in those opportunities have a ripple effect, leaving students less prepared for their careers.

Making up for students’ lost income was key, too. The Cleveland Foundation’s support was crucial.

“The idea of using our funding to pay stipends to students to do this work so they could have meaningful work experience that was both paid and could help with their career path—and that could generate ideas that could be important for Cleveland’s competitive advantage—were all reasons why we supported this,” Kuri says.

Among those who benefited from the project was 2020 Industrial Design grad Jason Taft. He was chosen as team leader for the group that sought to address health care worker needs, which entailed managing five undergraduate students. They surveyed about 70 medical professionals from across the county. Taft conducted interviews, drew concepts, worked on design proposals and oversaw research.

It was a valuable learning experience. Taft relied heavily on his team’s professional mentor, Bible-Churavy, for advice on managing his teammates, who in some cases were friends. These days, Taft operates a design consulting firm in his hometown of Kalamazoo, Michigan, and he says the managerial guidance he got on this project improved his leadership and relational abilities.

“I am very comfortable in taking charge with clients, which is great because some people just have no clue what they want,” he says, explaining he often works with small-business owners with whom close bonds can form.

“Small-business owners and artists, their whole livelihoods hinge on this. ... Being able to ride that line between friendship and managing is interesting. I think my client relations have actually benefited from it, just in the way I approach people and make them feel comfortable with what’s going on but also provide a little bit of direction.”

That’s just one way in which, by design, the PPE project helped empower CIA students. In addition, Cuffaro pointed to instilling in them a can-do attitude and creative-solutions-focused mindset.

“Recognizing this global issue will have long-term repercussions, we didn’t say, ‘Not my problem,’” he says. “We tried to create the best opportunity for those students to continue to learn. We looked at it for their good and for the good of future students. Frankly, it would’ve been much easier after last spring to say, ‘Man, I’m shutting down.’ But we didn’t. We wanted to be proactive.”

The project awaits its formal presentation to the Cleveland Foundation, but Kuri’s personal review showed her “high-level ideas that were very applicable” and had “potential for utilization.” She was excited by what she saw and what it might mean for Cleveland’s future.

“Design thinking and integrated, human-centered design that looks for better practices is the future of our society. Complex problems are going to get solved with design thinking, and CIA is incredibly well-positioned to attract students where there are opportunities to get involved in the community,” Kuri says. “For us, it’s important to Cleveland to have this top-notch art and design school in the community, where students can come and stay to help us change our city for the better.”