A successful career in toy design has led this CIA alum and faculty member to a dream project for the comics empire. 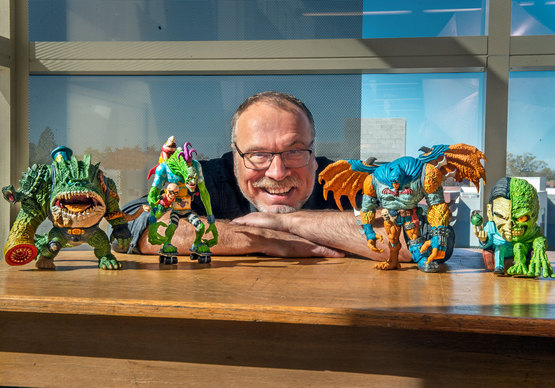 James Groman with (from left) Killer Croc, The Joker, Batman and Two-Face by DC Collectibles

October 2019 has been a big month for superstar toy designer James Groman. The Cleveland-based artist and CIA faculty member was on a business call recently when a truck pulled up to his home with samples of a new series of vinyl toys in the DC Collectibles’ Artist Alley collection.

Groman’s design focus has long been monsters. His gruesome foursome of 7-inch plastic figures for DC represents a Gromanized reimagining of Batman, The Joker, Killer Croc and Two-Face. The limited-edition figures, aimed at the adult collector, sell for about $65.

In the 1980s, Groman was one of the designers of the classic monster toys called Madballs. In 2017, his King Korpse won Toy of the Year from the Designer Toy Awards. Over the years, he has worked on hundreds of successful projects, but the Batman series is a high-water mark, he says.

Recently, Groman brought Batman and company in to show students in CIA’s Illustration Department. He also answered a few questions about the project.

When did you get tapped to do this?
I was at a toy and comics show in 2017 called Five Points Festival [in New York]. I was set up two aisles away from DC Collectibles, and a guy there had just pitched the idea of doing Artist Alley. The idea was to grab artists from all kinds of different disciplines—toys, collectibles, comics, TV, movies, whatever—and have them interpret their famous characters.

He was starting to look for artists, and he saw some of the toys I did for a Japanese company. It was King Korpse, that crazy gorilla. He goes, “Oh, we have to have you do some stuff for us!”

And it was DC Comics, so I'm thinking, oh, sure. You'll never call me. A lot of times [at conventions] someone will come by your table and they'll say, "We want to work with you!" And you go, "Great, here's my card." And then you never hear from them. It happens all the time.

But then DC called! What was that like?
It was amazing! They sent me an email and said, yeah, we're ready to kick off that project. First, they were talking about Swamp Thing and some of their monster characters. They have a character called The Demon, and Solomon Grundy, and all these things that you'd think I would do. But there's a guy there, Jim Fletcher, and he had this idea that, no, we're going to give him something totally the opposite of what we'd expect him to do. And that's a superhero.

OK, so your concept was Batman as interpreted by James Groman. How did you approach that?
It's funny, because we tell the students not to make lists and to just start sketching. But I actually made lists. I sat down and I thought of all the things I wanted the characters to have in them. I started to write down ideas like what if Batman mutated into this creature? Batman doesn't kill, but what if, since he's turned into a monster, he does kill? And what would he have? So, he's carrying trophies on his belt for all the characters that he's killed.

Then I started to sketch. And I actually did a lot of research on what has been done with Batman over the years, because he's 80 years old—he's been around. And almost everything you can think of has been done.

I started sending sketches in. I was kind of tame at first. And they said, “Get crazier. You're worrying about sticking to the original Batman too much. Do what you want to do. Don't worry about us.”

This guy Two-Face, he mutated by getting smarter. He's kind of the kingpin of crime, so his head gets bigger. I tried to keep a central idea that guided each one of them. You don't want to throw in too many ideas. Except for Joker. He got out of control.

What did you use to sculpt the mold prototypes?
Super Sculpey. It's like a craft clay. You can bake it in your oven at home—it doesn't need a kiln or anything.

How do you get the originals to wherever they need to be so molds can be made?
Everyone's got to look at them and everyone's got to say they're good to go—and when they're good, I cut them up into pieces, because they all have to be in separate pieces. Then I sent it to the mold maker, who was in Atlanta.

What was the best moment of this whole process?
Getting [the finished figures] and looking at them for the first time, that's the most gratifying. It's such a long process. I wondered, am I ever going to see these things? Did it really happen? This is like a dream come true to work on this stuff.